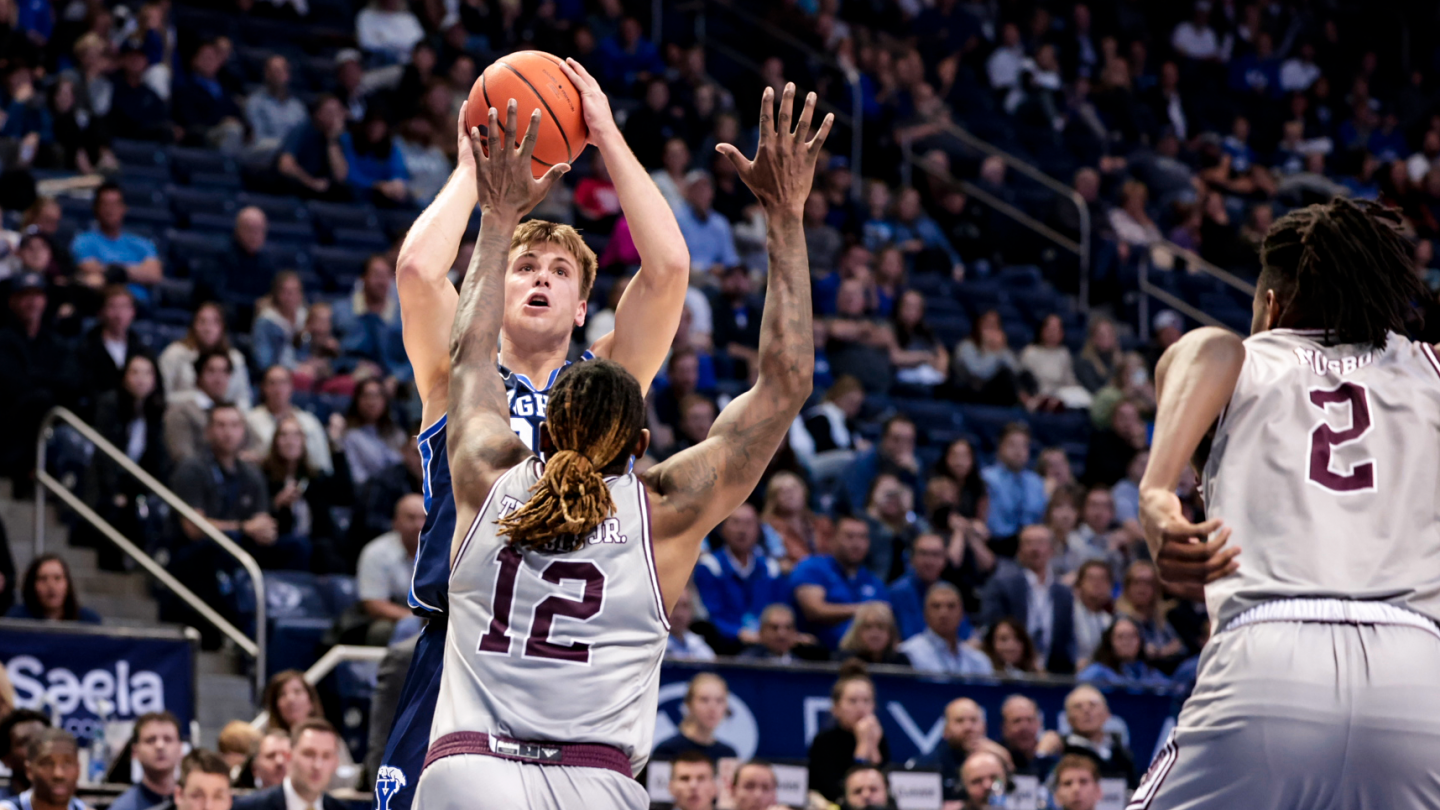 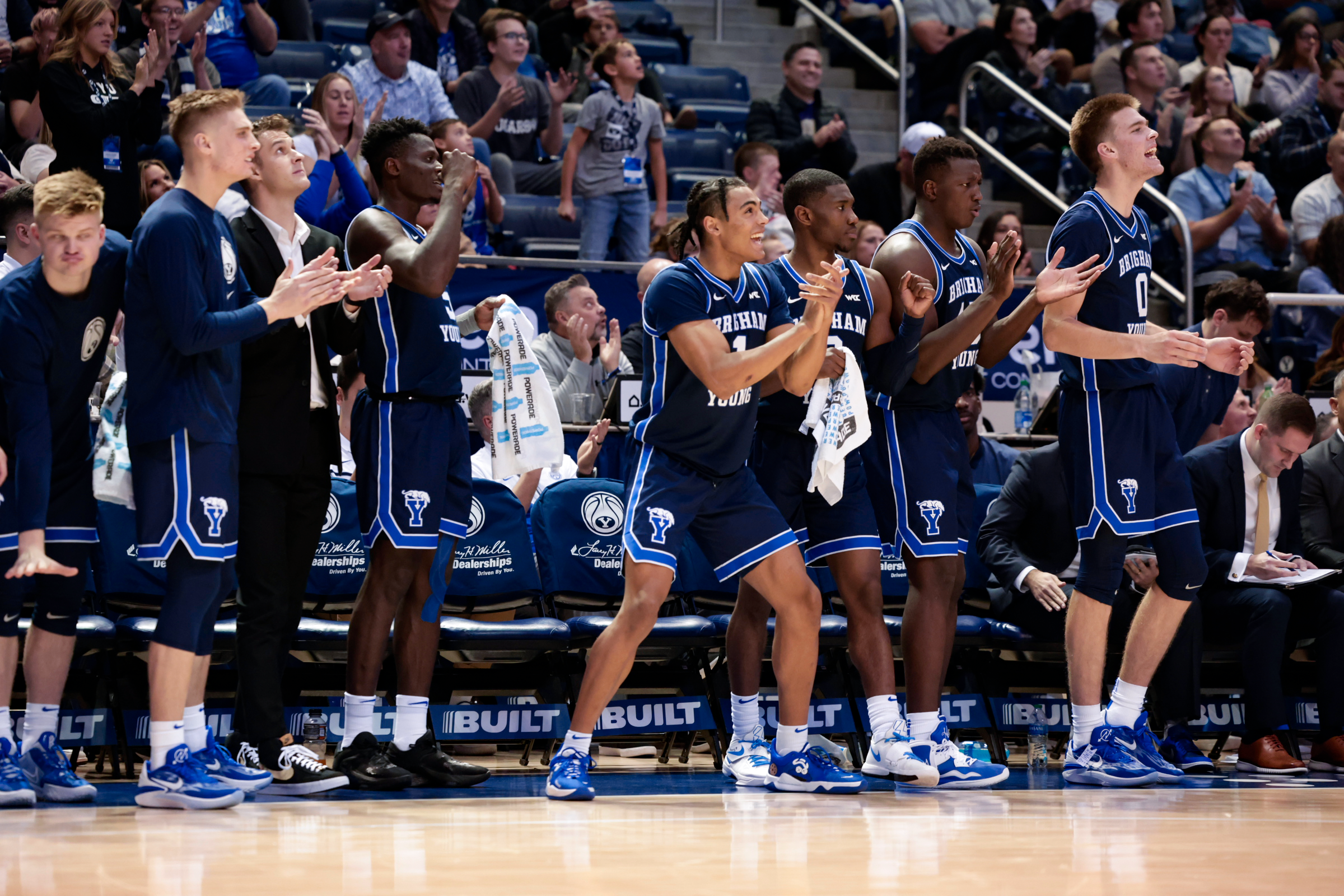 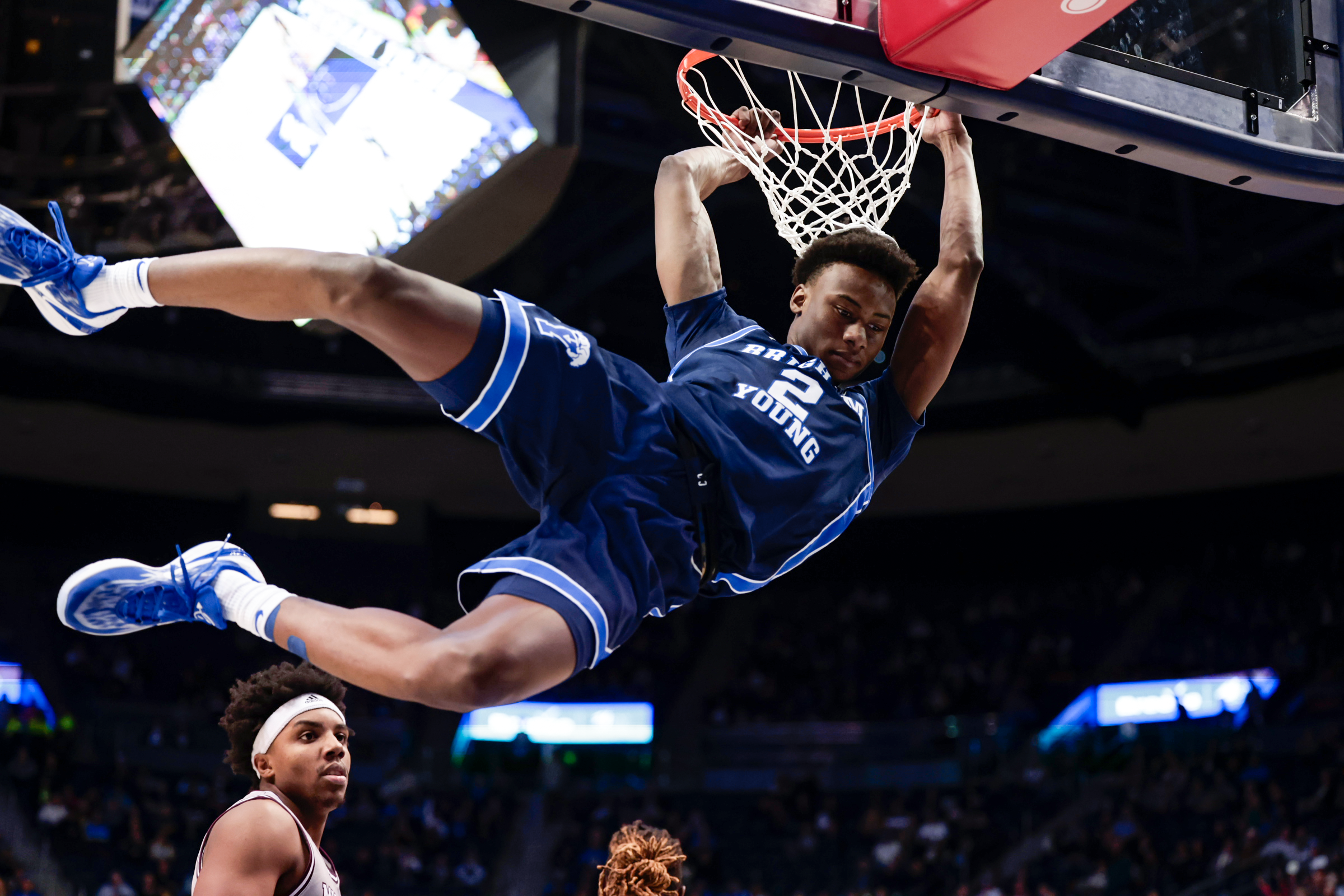 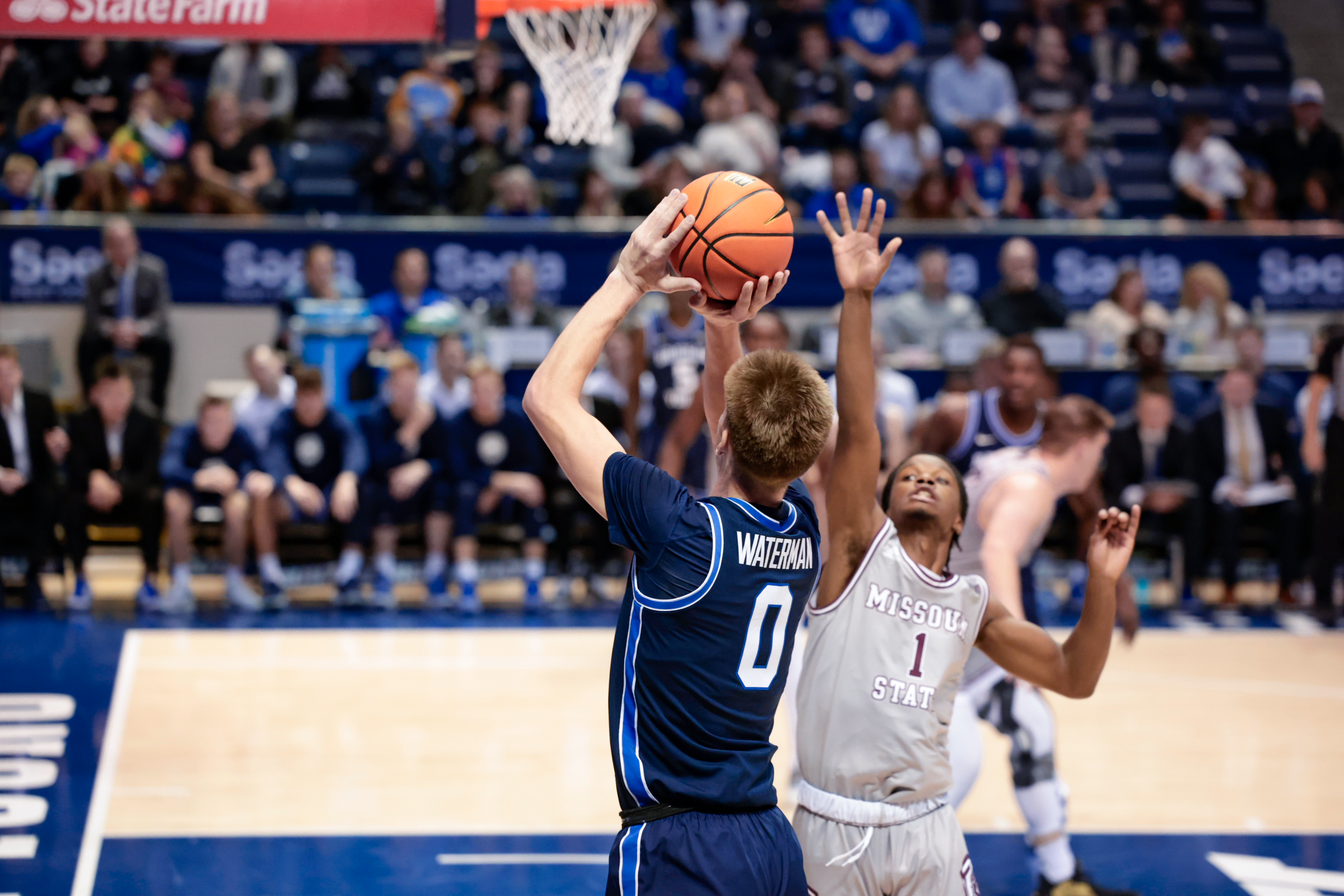 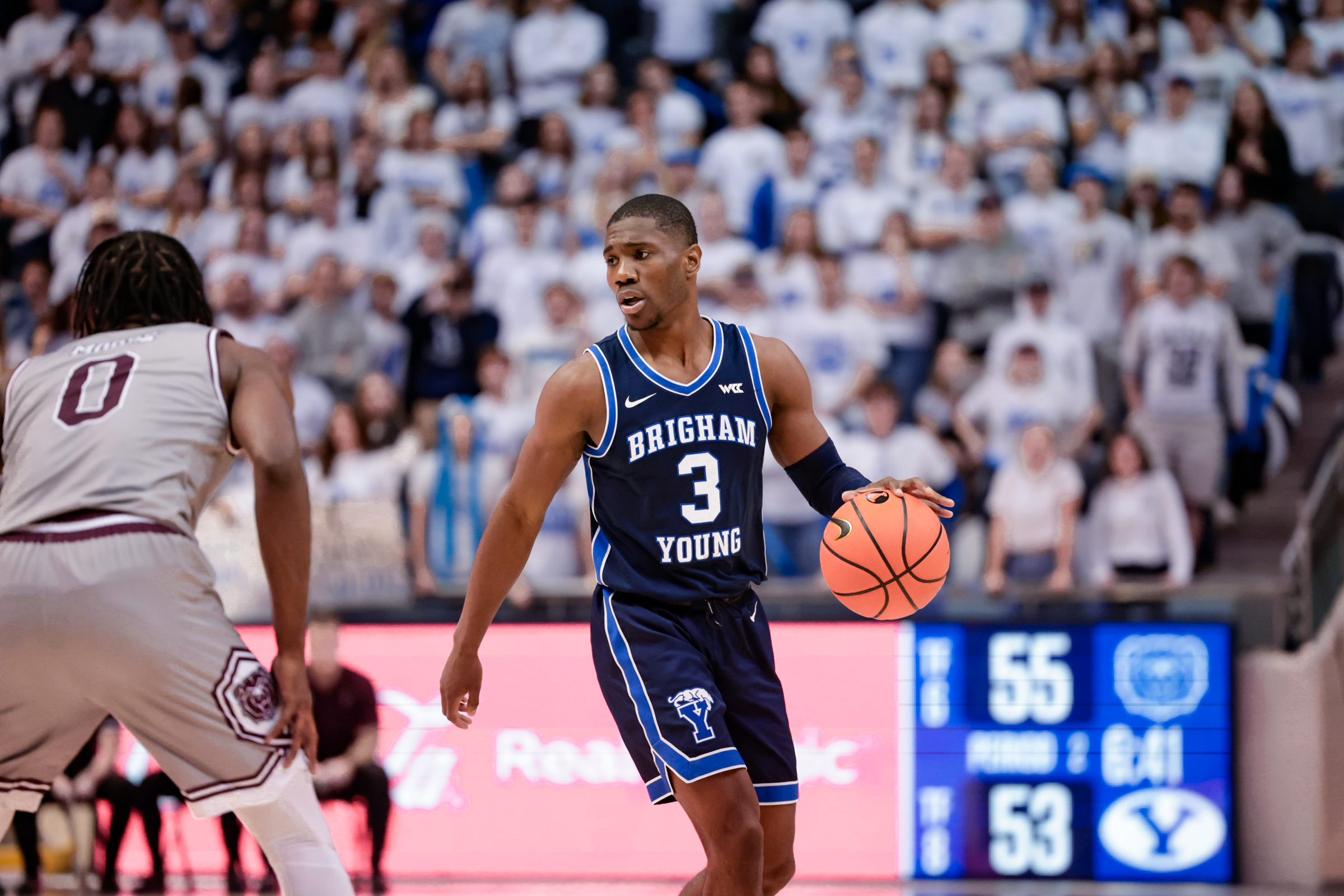 PROVO — The new kids on the block lifted BYU men’s basketball to a 66-64 win over the Missouri State Bears at the Marriott Center, Wednesday.

“It’s a huge play by a young player and I’m super proud of him,” said BYU head coach Mark Pope. “He [Dallin Hall] wants to get better, like everyone on our team. Dallin is really hungry to improve, he wants to get better and become a great player.”

With seven seconds left and the game knotted at 64, head coach Mark Pope put the ball in the hands of true freshman Dallin Hall who drove the length of the floor and hit a jumper, off the glass to give the Cougars their 10th straight non-conference win at the Marriott Center. Hall finished with six points, four rebounds, one assist and a block in the win.

Noah Waterman was BYU’s leading scorer as he went 5-of-6 from behind the arc to match his career high for three-point field goals made in a game. He finished with 15 points and two rebounds.

Spencer Johnson was the only other Cougar to finished in double figures as he scored 10 points on 4-of-7 shooting while also grabbing four boards. Atiki Ally Atiki set a career high as he brought down 11 rebounds, five of which were on the offensive glass. Ally Atiki also recorded seven points, two blocks and a steal on his career night.

BYU spread the love as every player that saw the floor scored, for the second straight game. The Cougars finished with 32 bench points, a season-high that doubles the total from each of the first two games. In their second win in as many games against the Bears, BYU shot 41.1% from the field, 36% from behind the arc while

Rudi Williams threaded the needle to Jaxson Robinson on a backdoor cut for a two-hand throwdown to open the scoring for the Cougars. Quick ball rotation on BYU’s next possession found Williams on the left-wing for a triple to take an early 5-2 lead.

After Missouri State scored six-straight points to take a 12-10 lead a Noah Waterman three and two free throws from Gideon George regained the lead for the Cougars.

The Bears opened up a five-point lead with 9:45 to play in the first half before Waterman knocked down back-to-back triples to give BYU a one-point advantage with 7:54 left.

Out of the under-eight media timeout, a three from Robinson and a jump-hook from George gave the Cougars their largest lead of the game with 5:25 to go in the first, 29-25.

A 7-0 run from the Bears retook a three-point lead at the under-four timeout. Spencer Johnson made the front-end of a trip to the line, missed the second, but got his own rebound and putback to knot the game at 32.

A baseline jumper by George coupled with a Fousseyni Traore putback stretched the BYU lead back to four before Missouri State banked in a three to cut it to one at the half, 36-35.

Traore scored four-straight points to open the second half and give the Cougars a 40-35 lead. After trading buckets, Trey Stewart threw a skip pass to the right-corner for Waterman who hit his fourth triple of the game.

On the next Cougar possession Stewart again found Waterman, this time from the left-wing for his fifth three-point make of the evening to open up a 10-point Cougar lead. The five threes from Waterman match his career high for three-point field goals made in a game as well as his most made threes without a miss.

Hall retook the lead for the Cougars with 5:03 left with a perfect trip to the line. Another Bears banked three put the Cougars down one with 3:08 to go, but a kiss off the glass from Johnson flipped the lead back to the Cougars 63-62.

A driving scoop-and-score from Missouri State’s Alston Mason knotted the game at 64 with seven seconds remaining.

After calling a timeout, Pope turned to freshman Dallin Hall who went the length of the floor, went to the cup, stepped back and knocked down a 12-footer off the glass to secure a two-point BYU win.

The Cougars then welcome Nicholls to the Marriott Center on Nov. 19. The game will be broadcast live on BYUtv at 7 p.m. MDT and can be heard live on BYU Radio Sirius XM 143, BYURadio.org/BYU Radio app or KSL 102.7 FM/1160 AM. 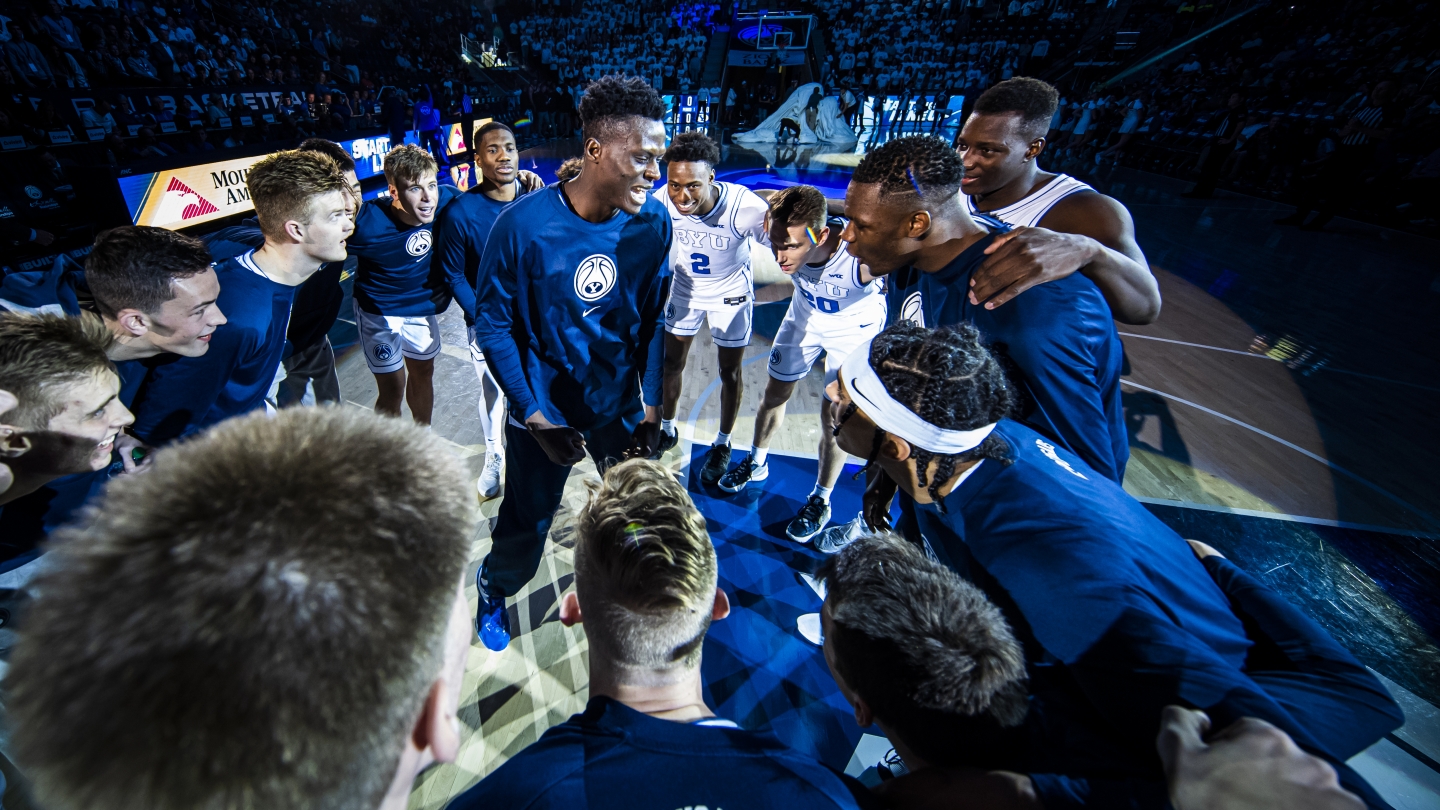 PROVO – BYU returns to the friendly confines of the Marriott Center on Wednesday, November 16, when the Cougars face Missouri State. Tip is scheduled for 7 p.m. MST.

Wednesdays’ contest will be broadcast on BYUtv. Jason Shepherd and Mark Durrant will also be on the call on the BYU Sports Network on BYU Radio Sirius XM 143 and KSL 102.7/1160 AM.