The Power of the Wasatch 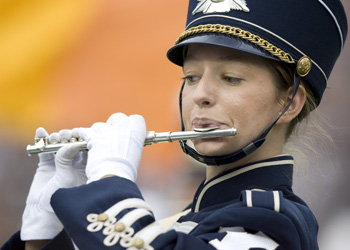 An essential piece of the pageantry, tradition and atmosphere of BYU athletics, the Cougar Marching Band takes its nickname — "Power of the Wasatch" — from the stretch of Rocky Mountains that provides the beautiful backdrop for BYU's campus.

The music of BYU's 225-member band has echoed from these mountains since 1908 when the first known band director, Albert Miller, was at the Y. When he started is not exactly known, but it was in that year he passed the baton to Robert Sauer — known for his composition, When it’s Springtime in the Rockies — who continued for the next 35 years. During his tenure the bands met at the lower campus College Hall in the Education Building. Under his baton the band toured the Western United States. The band was then known as The Cougar Band and like today was always there to support the university.

The marching facet of the band started off in a slightly different function than known today. Originally it was the ROTC marching band. In 1943, J.R. Halliday took over as the third director with Norman Hunt as his assistant. By this time the bands had moved from the College Hall to the East Room of the Social Hall.

After Halliday’s tenure, Norman Hunt served briefly as the director until 1945, when Ralph Laycock took over as director of bands for the Y, with Richard Ballou as his assistant. During Laycock’s 13-year tenure the band played at many events, including the Music Educators National Convention in 1958, and the College Band Directors National Association convention in 1964.

The Power of the Wasatch currently comes together for the first time during band camp, traditionally one week before the start of fall semester. During this intense week, the group begins at 8 a.m. and continues until 10 p.m. rehearsing in the west stadium parking lot and in the Cougar Marching Band Hall in Edwards Stadium. During this time, members learn basic marching techniques, memorize music and learn field formations for the pre-game and halftime shows, all in preparation for the first home football game performance.

Throughout the fall semester, the band rehearses three days a week for two hours at each rehearsal through wind, rain, heat and snow.

The success of BYU's football team has allowed the marching band to gain national exposure through performing at every home game and at more than 30 post-season bowl game appearances.  From a performance in the 1972 Presidential inauguration parade, to numerous bowl performances and spotlights during television football broadcasts — the Power of the Wasatch is always ready to represent Brigham Young University.