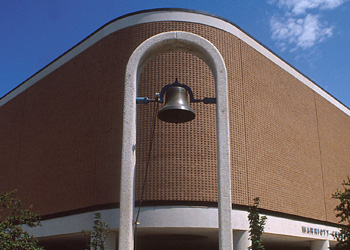 Rung after each home victory in football and basketball, the BYU Victory Bell is located on the southwest corner of the Marriott Center. The original Y Bell traveled across the plains with the early pioneers of The Church of Jesus Christ of Latter-day Saints and was used to call meetings among the saints and to announce any deaths in the community.

Donated to the Brigham Young Academy in 1875, it was used to begin and dismiss classes until it was destroyed in a fire in 1884. The Academy went without a bell for the next 28 years, using instead a variety of instruments as a class bell.

BYA became BYU in 1903 as the student body continued to grow, which further increased the need for a bell on campus. In 1912, a 36-inch diameter cast iron bell was purchased from the American Bell Foundry in Michigan. This bell was disappointing as a victory bell since it could barely be heard outside of the building it was housed in. Replaced in 1919 with a nickel bell donated by the Utah Stake presidency from the Provo Meeting House, the old cast-iron bell was given to the Boy Scouts of America. The new nickel bell was placed on campus in the education building belfry, and the tradition of the Y Victory Bell officially got underway.

However, the bell was once again quieted in 1949 after a basketball win over rival Utah. Several overzealous students climbed the tower and vigorously beat upon the bell until it cracked. Repaired with a bronze patch in 1954 by Frank Hemingway, the bell was removed from the education building and mounted on a trailer so it could travel with BYU's teams to away games.

Its mobility proved its downfall as it was stolen in 1958 only to be found six months later in a field in Springville, Utah. The theft prompted the construction of a bell tower on BYU's upper-campus overlooking the Smith Fieldhouse. Dedicated in 1959, the tower served well until 1973 when the bell fell while ringing in the dedication of the Marriott Center. The supporting yoke above the bell was broken, shattering the instrument. The bell was soon repaired by Ray Mortenson of the BYU Maintenance shop using electric welding - miraculously maintaining its previous tone - and was remounted in the tower.

In 1978, the bell was moved to its current home on the southwest corner of the Marriott Center. The open arch tower was designed by BYU landscape architect Boyd Dawler and is made of the same cast stone as the exterior pillars of the Marriott Center. Although the old bell tower above the Smith Fieldhouse no longer stands, the massive steel I-beams that supported the tower have now been converted into the strongest park benches in the Intermountain West.

Over the years the ringing of the bell has come to represent honor, achievement and spirit and has inspired several poems and songs from BYU faculty and alumni. Clyde D. Sandgren, who composed the Cougar Fight Song, penned a verse that was sung at the dedication of the upper-campus bell tower. As BYU victories have become more and more commonplace in recent decades, the ringing of the Y Bell after each win has caused it to be renamed the Victory Bell.