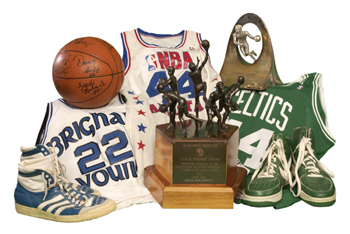 For more than a century, Cougar fans have celebrated the achievements of Brigham Young University's athletic programs. Now they can relive the great moments and athletic tradition at BYU.

Legacy Hall, the new BYU athletic museum and Hall of Fame, celebrates more than 109 years of BYU athletics - its accomplishments, its tradition and its legacy.

The 7,436 square-foot hall, which opened to the public in August 2004, is located inside a three-story atrium in the new Student Athlete Center on the west side of BYU campus, just north of the George Albert Smith Fieldhouse. Legacy Hall features 34 glass display cases, 21 wall displays and 13 video kiosks.

The 34 glass display cases are located throughout the three-story museum, each one exhibiting a particular theme such as BYU National Teams, Retired Jerseys and Former BYU Athletes. Each display case contains BYU athletic artifacts and memorabilia, generously donated by former BYU athletes and their families. The items are arranged in each case to remind Legacy Hall guests of great moments and athletes from BYU's storied past. Some of the items in the display cases include:

The 21 wall displays line the interior of Legacy Hall, featuring the achievements of BYU athletes and their programs. A 145-foot historical timeline is just one of many wall displays. The timeline allows guests to see the evolution of BYU athletics over the 109 years of its existence - from its small beginnings to becoming a national power. Other wall displays include:

The 13 video kiosks are spread throughout the three-story museum. Each kiosk takes guests on an interactive trip back in time to relive memorable BYU events and meet former BYU athletes. The easy-to-use touch-screen system makes navigating these kiosks simple for all ages. Guests can browse through the many touch-screen options such as text, trivia, photos and video content. Examples of these kiosks include:

The Vision of Legacy Hall

Funded completely through generous private donations, the concept of Legacy Hall became a reality when exhibit designer, Infinite Scale Design, LLC was hired to work with the BYU Athletic department to develop conceptual designs of the hall in October 2003. In January 2004 exhibit fabricator, JDH Group, commenced construction on the hall. The design phase concluded in May 2004 and construction on the hall finished in September 2004.

Legacy Hall is open to the general public Monday through Saturday from 7:00 a.m. until 9:00 p.m. Admission into Legacy Hall is free of charge and complementary tours are provided throughout the day or by appointment. For more information regarding Legacy Hall, please call 422-2118.

From North of Provo

From South of Provo