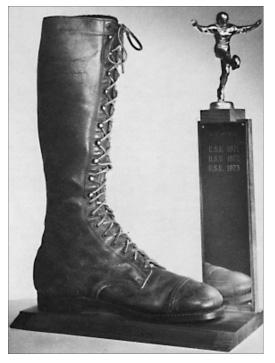 First instituted in 1971, the Beehive Boot is the symbol of gridiron supremacy in the state of Utah. The idea for the rotating trophy originated with Dave Schulthess, former Sports Information Director of BYU, and was agreed upon by SIDs from Utah, Utah State and Weber State. As the trophy would represent dominance within the confines of the Beehive State, it was decided that the trophy should be symbolic of the people who built Utah - the Mormon pioneers.

Finding a suitable pioneer boot for use as a trophy proved to be a difficult task. As pioneers wore their boots until there simply wasn't much left of them, there weren't many pioneer boots lying around. After an arduous search that included numerous personal calls and radio announcements, Tom Beasley, an antique dealer living in Cache Valley donated a pair of boots for use as the trophy. Estimated to be more than 100 years old, the Beehive Boot is an authentic piece of Utah history.

Awarded to the team with the best record against in-state opponents, the Beehive Boot lived its first four years at Utah State University. BYU then began a dominant run as it ascended into the realm of football's elite, claiming the Boot 20 times since 1971. The Cougars retrieved the boot in 2006, the first time since 2001, after the boot resided at the University of Utah for four years.

If the teams should end the season with identical records against in-state opponents, a winner is chosen by vote of the in-state media who covered the schools. This situation has occurred twice in the history of the boot (1973 and 1997) with Utah State receiving the trophy each time.

The trophy became a memorial to Steve Smilanich, a former sports writer for United Press International, in 1979. A native Utahn, Smilanich was killed in an automobile accident in New York City in 1970. Prior to his death, he was the national college sports editor and assistant sports editor for UPI.