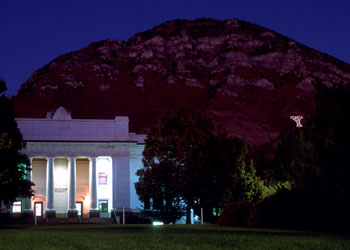 A nationally recognized symbol of BYU, Y Mountain is a featured shot of almost every BYU game broadcast on television. Located about one-half mile east of campus and halfway up the mountain, the Y looks out over the valley and is one of its most prominent features.

Preparations for placing the initials BYU on the mountainside began in April of 1906 when president George H. Brimhall commissioned surveyors for the letters "B," "Y" and "U." The letter "Y" was first laid out to insure that the initials were properly centered on the mountain. Beginning in the early morning, students formed a line that zigzagged up the mountainside. Standing eight feet apart, each student would carry a load of lime powder up to the next person and then return for another.

Officials expected to complete laying out all three letters by 10 a.m. By 4 p.m., only the Y was covered. After such a laborious day of work, plans to fill in the other two letters were scrapped.

The original Y was made by a thin layer of lime powder and was in need of constant repair. Hoping to make it more permanent, a layer of rock was added in 1907. The next year, 20,000 pounds of sand and cement were carried up the mountain to form a three-foot high wall around the letter to hold it together. Several years later the letter underwent a final facelift as the blocks, or serifs, were added to it to give its current appearance.

As a dominating feature of Utah Valley, many students are drawn to the Y. Freshmen often hike the mountainside as an initiation of sorts when they arrive at BYU, solitary figures climb to the Y in search of reflection and couples frequently visit the Y to take in the majestic view from its heights as they plan out their dreams.

Five times a year Y Mountain flares to life. The Intercollegiate Knights, a club dedicated to chivalrous principles and maintaining traditions, string a cord of lights around the border of the Y for Freshman Orientation, Homecoming, Y Days, and April and August graduations. Hordes of students flock to the Y during those days as a way of getting into the spirit of the event.

Earlier years saw members of the Intercollegiate Knights bear torches up the mountainside to light buckets of kerosene-soaked mattress batting placed around the edge of the Y. After a time it was decided that the kerosene was too dangerous, and a generator is now placed nearby to power 25-watt light bulbs through the night. Members of the club remain on the mountain through the night to watch over the lights and ensure that they remain lit through morning. On such nights, the blazing symbol of BYU can be seen from the far reaches of the valley.

Y Mountain is an integral part of the BYU experience. A symbol of the spirit, pride and strength of BYU, it is frequently visited by BYU students past, present and future and stands as a monument to the success of BYU and its alumni.