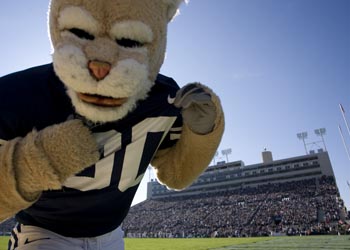 The Cougar, chosen as BYU's mascot by former coach Eugene L. Roberts in the early 1920s, has undergone a tremendous evolution since its inception to become what is now the feline phenomenon known as Cosmo the Cougar.

BYU purchased a pair of cougar cubs for 50 cents each in 1924 to excite BYU fans at athletic events. Live cougars prowled the sidelines of BYU games on a regular basis through the late 1940s and on special occasions through the 1960s.

The original cubs were housed on the south side of campus until 1929 when they managed to break out of their cage, kill two dogs and begin stalking livestock on nearby farms. Both were recaptured later the same day. One Cougar died, apparently from natural causes, three weeks later, and the other was taken to the old Salt Lake Zoo. From then on, BYU procured its mascots from nearby zoos and local bounty hunters but never owned its own cougars again.

Cosmo the Cougar, the brainchild of then-pep chairman Dwayne Stevenson, made his first official appearance before BYU fans on October 15, 1953. At a cost of 73 dollars for the costume, Daniel T. Gallego, Stevenson's roommate, became the first man under the fur. The name Cosmo was derived from BYU's diverse student body.

"BYU is a very international, cosmopolitan school, and that is where we got the name Cosmo," said Gallego.

One of Gallego's brightest memories of Cosmo was when he wasn't wearing the costume. Ernest Wilkinson, then-president of BYU, once donned the disguise at a pep rally and, much to everyone's surprise, "acted just like me," said Gallego, "When he took the mask off, everyone was shocked."

Traditionally, Cosmo's identity was kept secret throughout the school year, not to be revealed until the final home basketball game of the year. Unable to communicate verbally, Cosmo uses exaggerated gestures and body language to get his point across to the BYU faithful.

Being a crowd-pleasing, show-stealing symbol of Cougar pride can have a down side. Sparking the Cougar crowd has at times enticed opposing audiences to attempt to "skin the cat."

"In Wyoming, I had to walk around the entire game with my tail in my hand so that someone wouldn't pull it off," said Brian Larney, who was Cosmo in 1981. "On the other hand, I was protected from all the flying crowd debris by the cougar head."

With more than a half-century of service to the BYU community, Cosmo has become an icon of Cougar sports to fans and foes across the country. Through Cosmo's Kids Club, Team Cosmo and Cosmo's Corner, he is helping raise another generation of BYU fans.

The Brick Oven, a historical restaurant in Provo, helped bring Cosmo to a whole new level in 2001. Thanks to the generosity of owner Glee Zumbrennen, Cosmo was equipped with a brand new custom van appropriately named the Cosmobile.

The van includes a 1600-watt, 12-speaker stereo system, a dance stage on top, a basketball hoop, a variety of specialty lights, a fog machine, several sirens and a cordless public address system. The van also includes a complete wrap featuring Cosmo. The Cosmobile provides a way for Cosmo to be involved in the local community and bring the Cougar spirit to fans at athletic competitions both home and away.