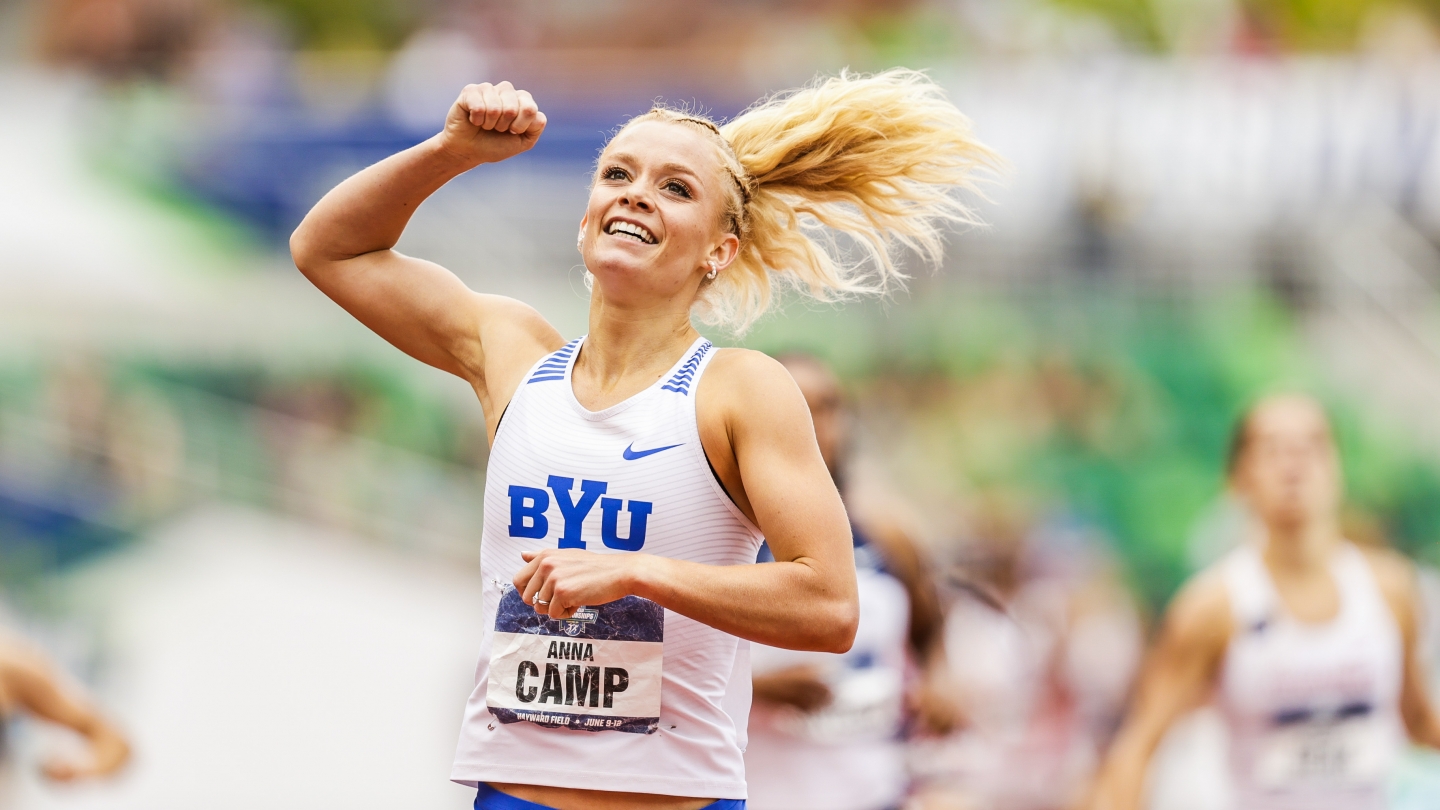 EUGENE, Ore. – Anna Camp-Bennett claimed the NCAA title in the women’s 1500m with a school record-breaking 4:08.53 to lead BYU women’s track and field to a 10th-place finish at the NCAA Outdoor Track and Field Championships on Saturday at Hayward Field.

Camp-Bennett used an incredible kick with a little more than 100m remaining to claim the 1500m national title. The senior earned All-America First Team honors and became the first Cougar to win the NCAA title in the event since 2000.

“My race plan is always pretty simple, I just try to sit in that top group and hope my speed can carry me through,” said Camp-Bennett in an interview with ESPN. “Luckily, the other girls were so fast and set good paces. There were a lot of girls that were really, really quick and I was hoping it would turn out, and it did.”

After breaking the program record two days prior in the semifinal with a time of 4:09.53, Camp-Bennett’s time broke her own school record by a little more than a half-second in the championship performance.

“That was a thrilling performance by Anna,” said BYU associate director of track and field Diljeet Taylor. “She has a tremendous kick and was so determined on that homestretch for the win.”

With Camp-Bennett supplying 10 points on her own, the BYU women’s team totaled 20 total points to finish 10th in the final standings. It marked the best team finish at the outdoor championships since the 2005 team finished 10th.

“A top-10 finish for our women caps off a tremendous year for the women of BYU,” Taylor said. To say I am proud is an understatement. This year showcased years of faith, trust, hard work and passion.”

Courtney Wayment finished fourth overall in the women’s 3000m steeplechase with a time of 9:32.93. The junior picked up All-America First Team honors while scoring five points for the Cougars.

Claire Seymour supplied the five other points with a fourth-place finish in the women’s 800m. The senior ran a career-best 2:01.91, the fourth-fastest time in BYU history, to secure All-America First Team honors.

After racing in the 1500m semifinal on Thursday, Whittni Orton finished 18th in the women’s 5000m final. She completed the race in 16:05.33 and received All-America Honorable Mention honors.

The BYU men placed 17th in the final standings when their competition at the championship meet concluded on Friday. This is the second season in a row that both the men’s and women’s programs have finished in the top 25 and the first time since 2009 that both teams placed in the top 20.

“As always the case, we had some people surpass expectations, some meet expectations and others struggle,” BYU director of track and field Ed Eyestone said. “We had enough people come through to have the women place 10th and the men place 17th. The level of competition at the NCAA Championships this year is second only to the Olympic games as far as a track meet.”