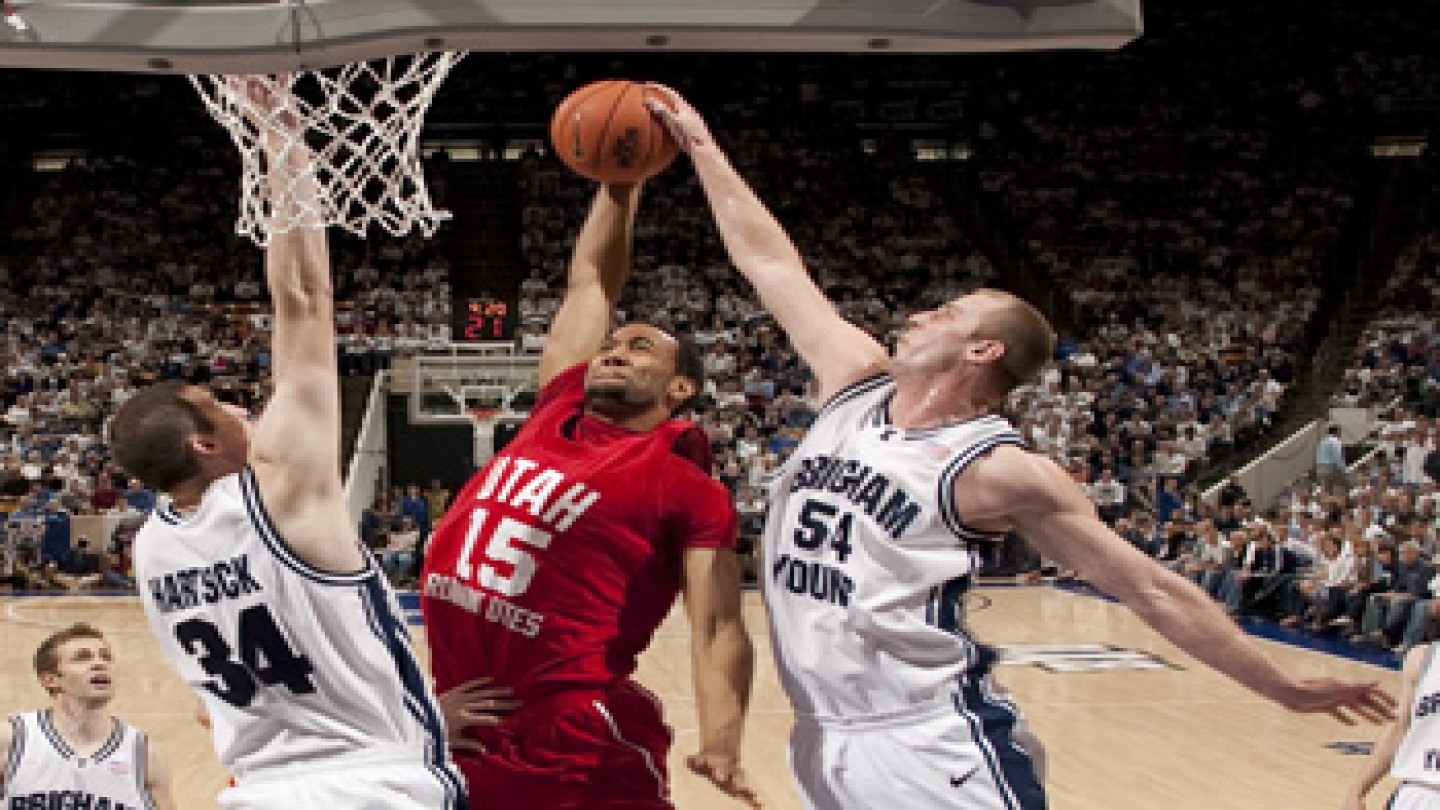 BYU men’s basketball (23-6, 11-4 MWC) will look to lock up at least a share of the MWC regular season title when the Cougars take on Air Force (9-19, 0-15 MWC) at 7 p.m. MT in the Marriott Center. The Cougars are tied with Utah and New Mexico for first in the MWC at 11-4. The Lobos play at Wyoming at 1:30 p.m. while the Utes take on TCU at home at 4 p.m. The Cougars have won three straight and eight of nine after starting the conference season at 3-3. BYU will honor its three seniors, Lee Cummard, Gavin MacGregor and Archie Rose, prior to the game. Saturday’s game will be televised live on The Mtn. while the radio broadcast can be heard on KSL Newsradio 102.7 FM and 1160 AM out of Salt Lake City and on the Internet at KSL.com beginning with the pregame show at 6 p.m. MT.

The Cougars will head to the Thomas & Mack Center in Las Vegas for the 2009 Conoco Mountain West Conference Basketball Championships from March 12 to 14. The tournament bracket will be announced Saturday night following BYU’s game against Air Force. If BYU finishes as the top seed the Cougars will play the winner of Air Force and Colorado State. The No. 2 seed will face TCU and the No. 3 seed will take on Wyoming. Check www.byucougars.com for tournament information. All games will be broadcast on The Mtn., CBS College Sports or Versus. Listen to the games live on KSL Newsradio 102.7 FM and 1160 AM out of Salt Lake City or via the Internet at KSL.com.

— A win Saturday against Air Force would give BYU at least a share of the 2009 MWC men’s basketball conference title with any combination of Utah and/or New Mexico. A conference title would mean three straight for the Cougars, winners of the 2007 and 2008 regular season titles. The only time BYU has finished first in conference play for three-straight years was from 1932-34.

— At 23-6 in 2008-09 two-time MWC Coach of the Year Dave Rose has guided BYU to four-straight 20-win seasons and three-straight postseason berths. In his first season the Cougars were 20-9 and went to the NIT. In his second campaign he guided the Cougars to the outright MWC title, a top-25 ranking, a trip to the NCAA Tournament and a 25-9 overall record. Last season he led BYU to a 27-8 overall record, a second-straight outright league title and a trip to the NCAA Tournament. He has the best record through 120 games of any BYU basketball coach.

Air Force is 9-19 overall and in search of its first conference victory at 0-15 in the final game of the regular season. The Falcons took UNLV down to the wire in Las Vegas, pulling within two points at 41-39 with 1:46 to play before UNLV pulled away and ended up winning 46-43. Prior to the UNLV loss the Falcons had two close calls including a three-point loss to Wyoming (65-62) and a five-point loss to Colorado State (71-66). As a team Air Force averages 58.3 points per game (9th in the MWC) while shooting .436 from the field. The Falcons yield 62.0 points per game (2nd in the MWC) while allowing their opponents to shoot just .419 from the field. Air Force averages 28.6 rebounds per game while its opponents rebound at a rate of 31.0 per game. The Falcons shoot .377 from beyond the arc (4th in the MWC) and make 6.4 per game. Their opponents shoot .355 from downtown and hit 7.8 threes per game. Andrew Henke leads the team in scoring at 12.8 points per game (14th in the MWC) while Anwar Johnson (11.4) and Matt Holland (11.1) also average double figures. Evan Washington leads the team in rebounding at 4.4 boards per game while Johnson leads in assists with 68 total. Henke and Holland are solid threats from the outside as Henke has hit 64 treys at a .424 clip (3rd in the MWC) and Holland hitting 65 at a .419 clip (5th in the MWC). Air Force head coach Jeff Reynolds is in his second season at Air Force and has a record of 25-33 with the Falcons.

LAS VEGAS (AP) - Wink Adams had 11 points to lead UNLV to a 46-43 victory against Air Force on Wednesday.

UNLV (21-8, 9-6 Mountain West Conference) led only 41-39 with 1:46 to play after Air Force’s Andrew Henke connected on a pair of 3-pointers. But the Rebels scored five points on their next three possessions, including a layup by Adams as the shot clock expired and three free throws.

Joe Darger and Rene Rougeau added nine points each for UNLV, which only shot 30 percent and connected on just 6-of-23 3-point attempts.

UNLV trailed by eight points with five minutes to play in the first half before going on a 9-0 run to take a one-point advantage at halftime. It opened the second half with a 9-2 outburst.

2 BYU’s NCAA Division I ranking in team field goal percentage (as of March 1). The Cougars are shooting 49.4 percent from the field as a team.

3 The number of BYU players ranked in the top six scorers (all games) in the MWC: Lee Cummard (2), Jonathan Tavernari (5) and Jimmer Fredette (6).

4 The number of times BYU head coach Dave Rose has guided the Cougars to 20-win seasons, including 2008-09, in four seasons as head coach. BYU reached the mark this season with a home win against New Mexico. Rose is the third BYU coach to win 20 games in each of his first four seasons.

18 The number of free throws Jackson Emery has attempted without missing in the last 12 games. He has not missed a shot from the charity stripe since missing the first of two at New Mexico. He hit 2-of-2 vs. Utah to extend the streak.

20 The number of games BYU has won by double figures. The Cougars have won six games by 20-29 points and five games by 30-plus points.

22 The number of consecutive games in which Jonathan Tavernari hit a three-pointer before going without a trey against Utah. He owns the single-season record with 21-straight games with a three and tied the all-time record held by Mark Bigelow (22) set over a span of two seasons.

98 The number of conference wins for BYU since the formation of the MWC in 1999, first among all conference teams.

Best Starts Through 29 and 30 Games

Through 29 games this season BYU is 23-6, equal to last season’s pace. Only two Cougar teams that played at least 29 games during a season earned a better record in the first 29 games while five others were also 23-6. A win Saturday vs. Air Force would tie the current squad for the second-best record through 30 games with three other teams, including last season’s squad.

Including a career-high 36 points against Long Beach State and performances of 30 points against Weber State, 28 against Cal Poly and 26 at Tulsa, Lee Cummard now has 495 total points for the season and 1,508 for his career. He passed Jay Cheesman (1,408) for 11th all-time in scoring in BYU history during the TCU game. Cummard is five points from passing Kresimir Cosic (1,512) for 10th all-time. With 17 points at Air Force junior forward Jonathan Tavernari surpassed 1,000 points for his career. With 19 points at Wyoming he jumped from 34th to 30th all-time in scoring at BYU. Tavernari is now 12 points from passing Steve Schreiner for 29th all-time.

Jonathan Tavernari’s streak of 22 games with a made three came to an end when he went without a trey against Utah. The 22-game streak with a made three is the longest in a single season in BYU history, one better than Terrell Lyday’s 21. It is tied for the longest overall streak set originally by Mark Bigelow over his first two seasons as a Coguar. Tavernari also holds a streak of 20 games that included the last 16 games of last season and the first four of this season.

BYU coach Dave Rose coached his 120th game as the head coach of the Cougars when BYU defeated Air Force on Feb. 3. His career record through 120 games of 89-31 (.742) is the best record for a BYU men’s basketball coach through his first 120 games. Rose is three games better than the next best coach, Roger Reid. Below are the records of BYU coaches through their first 120 games and their career records.

After hitting two threes at San Diego State junior forward Jonathan Tavernari has 193 career threes, including 76 this season. He started the season with 117 threes and has passed Andy Toolson (141) and Mike Rose (163) and is now second all-time in school history in made threes and 24 from passing Mark Bigelow for first. Tavernari also has 509 attempts from downtown, good for second all-time in school history. Lee Cummard hit a three against Utah and now has 150 threes for his career, good for fourth all-time at BYU. Cummard is also fifth all-time in attempts with 342.