Game 29 - BYU at Wyoming on Wednesday 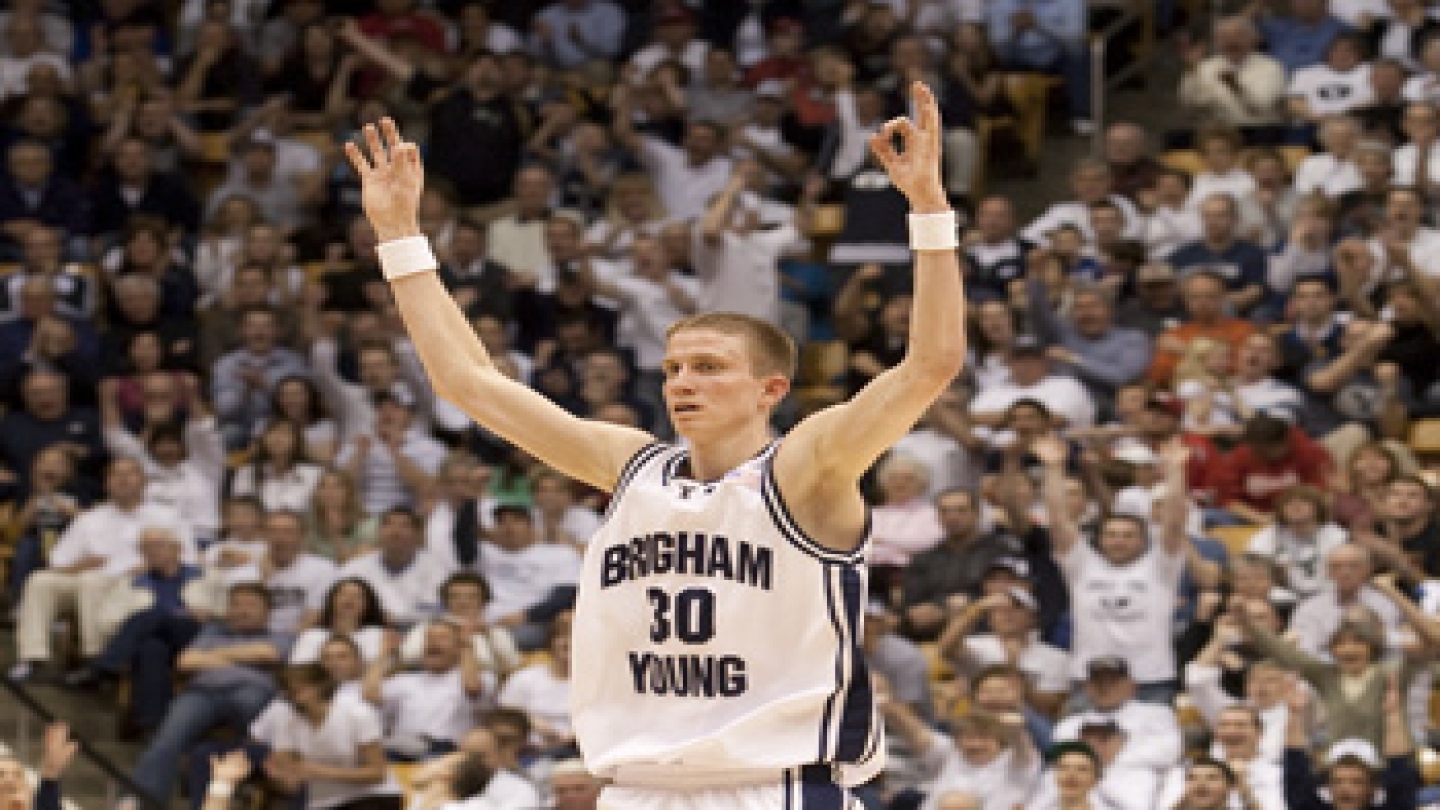 Cougars at Wyoming on Wednesday

BYU men’s basketball (22-6, 10-4 MWC) will look to keep its MWC title hopes alive on Wednesday at Wyoming (18-10, 7-7 MWC) at 6 p.m. MT at the Arena-Auditorium in Laramie. The Cougars defeated first-place Utah 63-50 on Saturday, Feb. 28, to pull within one game of the Utes. On Jan. 31 the Cougars defeated Wyoming 84-60 in Provo to begin a stretch that has seen BYU win seven-of-eight games. The Cowboys have played well as of late, winning four-straight games to even their conference record. Wyoming is 12-1 at home this season. Wednesday’s game will be televised live on The Mtn. while the radio broadcast can be heard on KSL Newsradio 102.7 FM and 1160 AM out of Salt Lake City and on the Internet at KSL.com beginning with the pregame show at 5 p.m. MT.

The Cougars will conclude the regular season on Saturday, March 7, at home against Air Force. The game is scheduled for 7 p.m. in the Marriott Center. BYU will honor its seniors, Lee Cummard, Archie Rose and Gavin MacGregor, Saturday night prior to the game. The Falcons are currently 9-18 overall and 0-14 in MWC play and riding a 15-game losing streak. BYU won the first meeting this season 71-50 in Colorado Springs. Follow the game on www.byucougars.com and listen live on the radio beginning with the pregame show at 6 p.m. MT on KSL Newsradio 102.7 FM and 1160 AM out of Salt Lake City or via the Internet at KSL.com. The game will be televised live on The Mtn.

— At 22-6 in 2008-09 two-time MWC Coach of the Year Dave Rose has guided BYU to four-straight 20-win seasons and three-straight postseason berths. In his first season the Cougars were 20-9 and went to the NIT. In his second campaign he guided the Cougars to the outright MWC title, a top-25 ranking, a trip to the NCAA Tournament and a 25-9 overall record. Last season he led BYU to a 27-8 overall record, a second-straight outright league title and a trip to the NCAA Tournament. He has the best record through 120 games of any BYU basketball coach.

Wyoming is 18-10 overall and 7-7 in MWC play this season, having won four straight to even its record in conference action. The streak started with home wins over UNLV and TCU and continued with wins on the road against Colorado State and Air Force. The Cowboys are one of the best home teams in the conference with a record of 12-1. Their only home loss this season was against Utah, 91-67. Wyoming is the second-highest scoring team in the conference behind BYU at 76.4 points per contest. The Cowboys are last in scoring defense at 75.0 points per game but have shown improvement during their winning streak holding three of their four opponents to fewer than 70 points. Wyoming is the third-best free throw shooting team at 72.9 percent and has made 567 shots from the line, 74 better than second-place New Mexico. The Cowboys are also third in the league in field goal percentage (.470) and second in rebounding at 36.5 per game. They are last in turnover margin (-3.32) and second to last in assist/turnover ratio (0.91). Four players average double-digits for Coach Heath Schroyer led by senior Brandon Ewing’s 18.8 points per game (1st in the MWC). He is followed by Sean Ogirri (14.4, 8th), Afam Muojeke (14.3, 10th) and Tyson Johnson (13.9, 13th). Ewing also leads the team and league in assists per game at 5.18. He is also fifth in the league in free throw percenatage at .825 and has 198 makes on the season, 40 more than anyone on the list. Johnson is sixth in the conference in field goal percenage at .519 while Sean Ogirri is fourth in three-point field goal percentage and first in three-pointers per game (3.29). Ewing and Ogirri are first and second in the league in minutes played per game at 38.07 and 36.29, respectively. Schroyer is in his second season at Wyoming and has a record of 30-28.

The Falcons had another chance to tie the game after Wyoming’s Afam Muojeke missed a pair of free throws with two seconds remaining, but the final buzzer sounded as senior Matt Holland lined up for a 3-point attempt in front of the Air Force bench.

Henke led Air Force with 23 points, while Holland had 20.

BYU and Wyoming have met 169 times. BYU leads the series 100-69 after defeating the Cowboys 84-60 in Provo on Jan. 31. The Cougars have won eight-straight against the Cowboys. During the streak BYU has won four-straight at home, three-straight in Laramie and one in the MWC tournament. Wyoming has a 53-31 advantage in Laramie while BYU boasts a 64-14 record in Provo. BYU has a 5-2 edge on a neutral floor, including a 3-0 advantage in conference tournament play (MWC Tournament wins in 2001, 2004 and 2007). Since the formation of the Mountain West Conference, BYU has won 17 of the 22 meetings. After Utah and Utah State, BYU men’s basketball has faced Wyoming the third-most in its history.

2 BYU’s NCAA Division I ranking in team field goal percentage (as of March 1). The Cougars are shooting 49.8 percent from the field as a team.

3 The number of BYU players ranked in the top six scorers (all games) in the MWC: Lee Cummard (3), Jonathan Tavernari (5) and Jimmer Fredette (6).

4 The number of times BYU head coach Dave Rose has guided the Cougars to 20-win seasons, including 2008-09, in four seasons as head coach. BYU reached the mark this season with a home win against New Mexico. Rose is the third BYU coach to win 20 games in each of his first four seasons.

8 The number of statistical categories in which a BYU player ranks among the top three in the MWC (all games) out of 13 categories tracked by the league. Also the number of statistical categories out of 19 tracked by the league in which BYU is ranked No. 1 as a team in the MWC (Scoring offense, scoring margin, field goal percentage, 3-point field goal percentage defense, rebounds, assists, assist/turnover ratio, defensive rebounds).

18 The number of free throws Jackson Emery has attempted without missing in the last 12 games. He has not missed a shot from the charity stripe since missing the first of two at New Mexico. He hit 2-of-2 vs. Utah to extend the streak.

19 The number of games BYU has won by double figures. The Cougars have won six games by 20-29 points and five games by 30-plus points

22 The number of consecutive games in which Jonathan Tavernari hit a three-pointer before going without a trey against Utah. He owns the single-season record with 21-straight games with a three and tied the all-time record held by Mark Bigelow (22) set over a span of two seasons.

97 The number of conference wins for BYU since the formation of the MWC in 1999, first among all conference teams.

Best Starts Through 28 and 29 Games

Through 28 games this season BYU is 22-6, equal to last season’s pace. Three Cougar teams that played at least 28 games during a season earned a better record in the first 28 games while four others were also 22-6. A win Wednesday at Wyoming would tie the current squad for the third-best record throught 29 games with five other teams, including last season’s squad.