Game 26 - Cougars at UNLV on Saturday 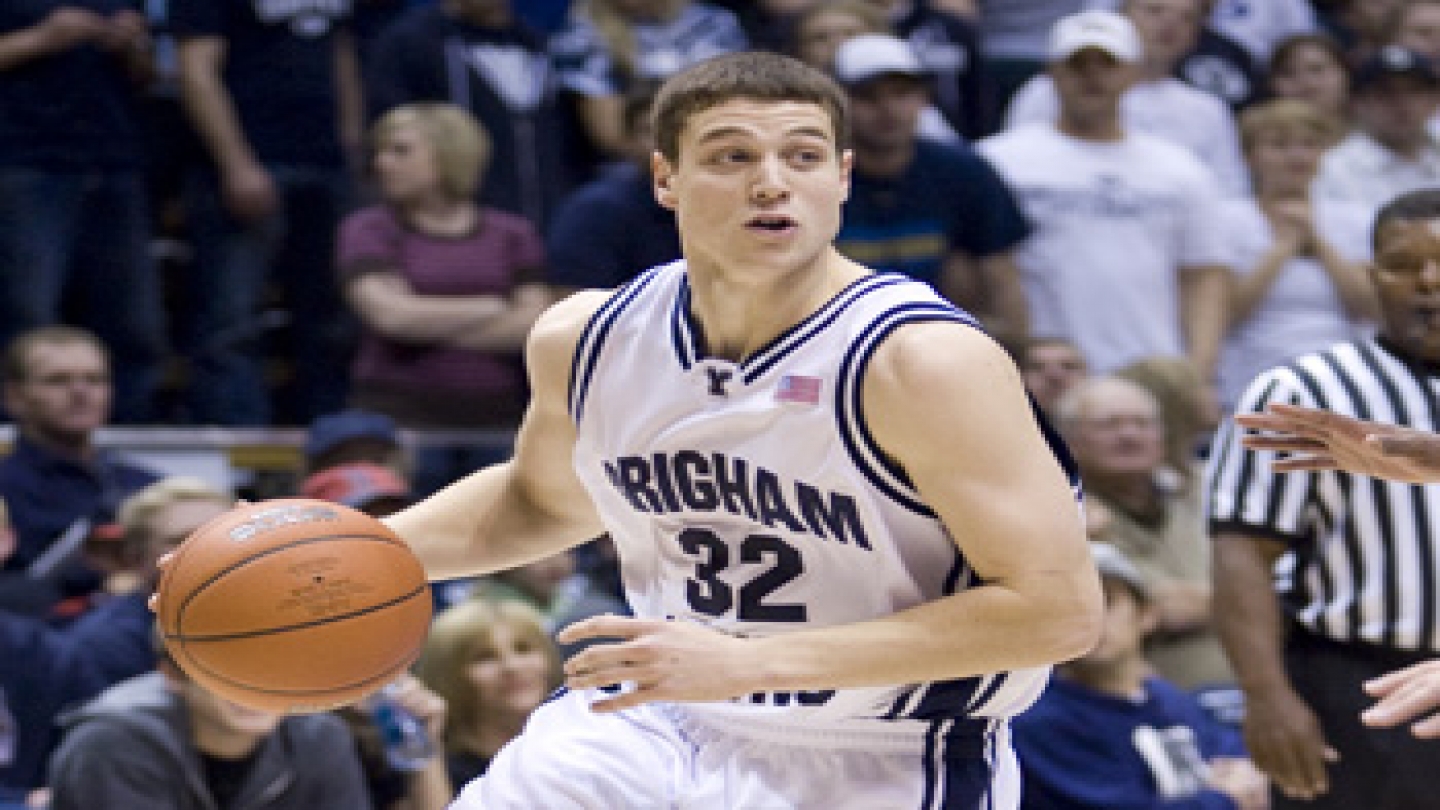 BYU men’s basketball (20-5, 8-3 MWC) will look to keep its winning streak alive on Saturday when the Cougars head to Las Vegas to take on UNLV in a key MWC matchup. BYU is tied for second in the league with San Diego State and the Rebels are right behind at 7-5 in conference action. UNLV won the first meeting this season against the Cougars, 76-70 in Provo. Saturday’s game will be televised live on CBS C in HD while the radio broadcast can be heard on KSL Newsradio 102.7 FM and 1160 AM out of Salt Lake City and on the Internet at KSL.com beginning with the pregame show at 7 p.m. PT.

BYU concludes its road swing at San Diego State on Tuesday, Feb. 24, at 7:30 p.m. PT. The Cougars won the first meeting in Provo 77-71 on Jan. 24. Follow the game on www.byucougars.com and listen live on the radio beginning with the pregame show at 6:30 p.m. PT on KSL Newsradio 102.7 FM and 1160 AM out of Salt Lake City or via the Internet at KSL.com. The game will be televised live on The Mtn.

— At 20-5 in 2008-09 two-time MWC Coach of the Year Dave Rose has guided BYU to four-straight 20-win seasons and three-straight postseason berths. In his first season the Cougars were 20-9 and went to the NIT. In his second campaign he guided the Cougars to the outright MWC title, a top-25 ranking, a trip to the NCAA Tournament and a 25-9 overall record. Last season he led BYU to a 27-8 overall record, a second-straight outright league title and a trip to the NCAA Tournament. He has the best record through 120 games of any BYU basketball coach.

UNLV is 19-7 overall and 1.5 games behind BYU in the MWC standings at 7-5. The Rebels are coming off a 77-68 road loss at Wyoming on Feb. 18. UNLV had won its previous two contests — home victories against TCU and Colorado State — before the loss to the Cowboys. UNLV’s other conference losses were at Colorado State (71-69), vs. San Diego State at home, at New Mexico and at TCU. The Rebels three conference losses after TCU were by a total of eight points with the SDSU and New Mexico games going to overtime. UNLV averages 71.4 points per game as a team (5th in the MWC) while shooting 43.5 percent from the field (8th in the MWC). The Rebels are fourth in the league in scoring defense (64.5 ppg) and sixth in field goal percentage defense (.422). UNLV is also third in assists (14.4), second in steals (7.2) and first in turnover margin (+4.15) and threes per game (7.9). Wink Adams leads the Rebels in scoring at 14.3 points per game and is followed by Tre’Von Willis (11.8), Rene Rougeau (10.9) and Joe Darger (9.7). Rougeau leads the team in shooting at 57.3 percent while Darger has made a team-best 66 threes. Rougeau also leads the squad in rebounds per game (6.9), blocks (49) and steals (38). Lon Kruger is UNLV’s head coach and has a 110-49 record in his fifth season as the head man of the Rebels. He is in his 23rd season as an NCAA Division I head coach and has a career record of 428-282.

The win snapped a four-game losing skid for the Cowboys (15-10 overall, 4-7 Mountain West Conference) as they nearly blew a 17-point second-half lead.

Adams hit three free throws to make it a six-point game early in the second half before Ewing keyed a 13-2 run with two straight 3-pointers.

UNLV cut Wyoming’s lead in half with eight straight points to make it a nine-point game with nine minutes left.

The Cowboys seemed to weather the storm, leading by 10 with six minutes remaining, only to see the Rebels answer with seven straight points. But Wyoming hit 8-of-10 free throws in the final 45 seconds to seal the win.

Sean Ogirri and Adam Waddell added 13 and 10 points respectively for the Cowboys.

Saturday’s game will be the 29th meeting between BYU and UNLV. The Rebels lead the all-time series 15-13 and have won four of the last five meetings, including 76-70 this season in Provo. The last time BYU won in Las Vegas was Feb. 5, 2005 when the Cougars won 82-72 in overtime. Last season UNLV went 2-1 against the Cougars, winning at home in the regular season and in the MWC tournament in Vegas while BYU won at home.

1 BYU’s NCAA Division I ranking in team field goal percentage (as of Feb. 15). The Cougars are shooting 50.8 percent from the field as a team.

3 The number of BYU players ranked in the top six scorers (all games) in the MWC: Jonathan Tavernari (3), Lee Cummard (4) and Jimmer Fredette (6).

4 The number of times BYU head coach Dave Rose has guided the Cougars to 20-win seasons, including 2008-09, in four seasons as head coach. BYU reached the plateau with a home win against New Mexico. Rose is the third BYU coach to win 20 games in each of his first four seasons.

5 The number of three-pointers Tavernari attempted without missing against Colorado State at home.

8 The number of statistical categories in which a BYU player ranks among the top three in the MWC (all games) out of 13 categories tracked by the league.

12 The number of games in which Jimmer Fredette has attempted a free throw without missing.

17 The number of games BYU has won by double figures. The Cougars have won six games by 20-29 points and five games by 30-plus points

17 The number of games in which BYU has shot 50.0 percent or better this season. The Cougars are currently No. 1 in the nation in field goal percentage (as of Feb. 15).

23 The number of consecutive free throws Lee Cummard has made. His last miss was his first of two attempts against San Diego State on Jan. 24.

95 The number of conference wins for BYU since the formation of the MWC in 1999, first among all conference teams.

Best Starts Through 25 and 26 Games

Through 25 games this season BYU is 20-5, equaling last season’s start. Only four Cougar teams that played at least 25 games during a season earned a better record in the first 25 games. A win Saturday would put the current squad behind only two teams that had better records through 26 games and tied with five others. See below.

With BYU’s win over New Mexico the Cougars reached the 20-win plateau for the fourth time under head man Dave Rose. Rose is just the third BYU coach to reach 20 wins in each of his first four seasons as he joins G. Ott Romney and Roger Reid as the others. Romney acheived 20 wins in each of his first five seasons from 1928 to 1933. Reid won 20-plus games in each of his first six seasons from 1989 to 1995. Rose is on pace to have the best winning percentage of each of the three through four seasons. Romney had won 66.4 percent of his games (83-42) and Reid 70.8 percent (92-38). Rose has won 74.8 percent of his games (92-31) and has five games plus the postseason to improve on that mark. This is the 32nd 20-win season in program history.

At 7-2 (.778) in true road games this season, BYU is on pace to have one of the best road records in program history. The only other Cougar team to have a better winning percentage away from home than the current squad is the 1979-80 team that went 10-1 (.909) on the road. BYU’s remaining regular season road games include UNLV, San Diego State and Wyoming.

Winning 20 or more games in the regular season has proven to be a significant indicator for BYU receiving an invitation into the NCAA Tournament. Since the first NCAA Tournament in 1939, BYU has had 21 seasons with 20 regular-season wins, including last year’s team. In those 21 years, BYU has earned a postseason invite each season, including 18 NCAA bids, three NIT berths (BYU played both NIT and NCAA in 1950-51) and one NAIB (1948-49) invite. In the modern era since the NCAA Tournament became the predominant championship over the NIT, BYU has had 16 seasons when it earned 20 or more wins during regular-season games (prior to starting the conference tournament). The Cougars have received an invite to play in the NCAA Tournament in 15 of those seasons, with the lone exception being the 2005-06 team that finished the regular season 20-7 and fell to 20-8 with a loss at the MWC Tournament before receiving an NIT invitation. Including last year, BYU has reached 21 regular-season wins during 12 of those 16 seasons and has been invited to play in the NCAA Tournament in each of those 12 years.

Including a career-high 36 points against Long Beach State and performances of 30 points against Weber State, 28 against Cal Poly and 26 at Tulsa, Lee Cummard now has 426 total points for the season and 1,439 for his career. He passed Jay Cheesman (1,408) for 11th all-time in scoring in BYU history during the TCU game. Cummard is 73 points from passing Kresimir Cosic (1,512) for 10th all-time.

With 17 points at Air Force junior forward Jonathan Tavernari surpassed 1,000 points for his career. His 22 points against New Mexico brought him into a tie for 35th all-time with Keena Young. He needs 17 to pass Mel Hutchins for 24th.

With a three at the 1:23 mark in the first half against New Mexico Jonathan Tavernari has hit a trey in the last 20 games and in 24 of 25 games this season. He needs two more games with a trey to break the BYU single-season record for consecutive games with a three held by Terrell Lyday (21) and three to set the career mark of 22 games held by Mark Bigelow — set over a span that included two seasons. Tavernari made a three in 20-straight games from the end of last season until going without a three against Cal Poly, the fifth game of this season.

After hitting three threes against New Mexico junior forward Jonathan Tavernari has 183 career threes, including 66 this season. He started the season with 117 threes and has passed Andy Toolson (141) and Mike Rose (163) and is now second all-time in school history in made threes and 31 from passing Mark Bigelow for first. Tavernari also has 488 attempts from downtown, good for second all-time in school history. Lee Cummard hit a three against New Mexico now has 146 threes for his career, good for fourth all-time at BYU. Cummard is also fifth all-time in attempts with 332.