Game 25 - Cougars and Lobos to Square off on Tuesday 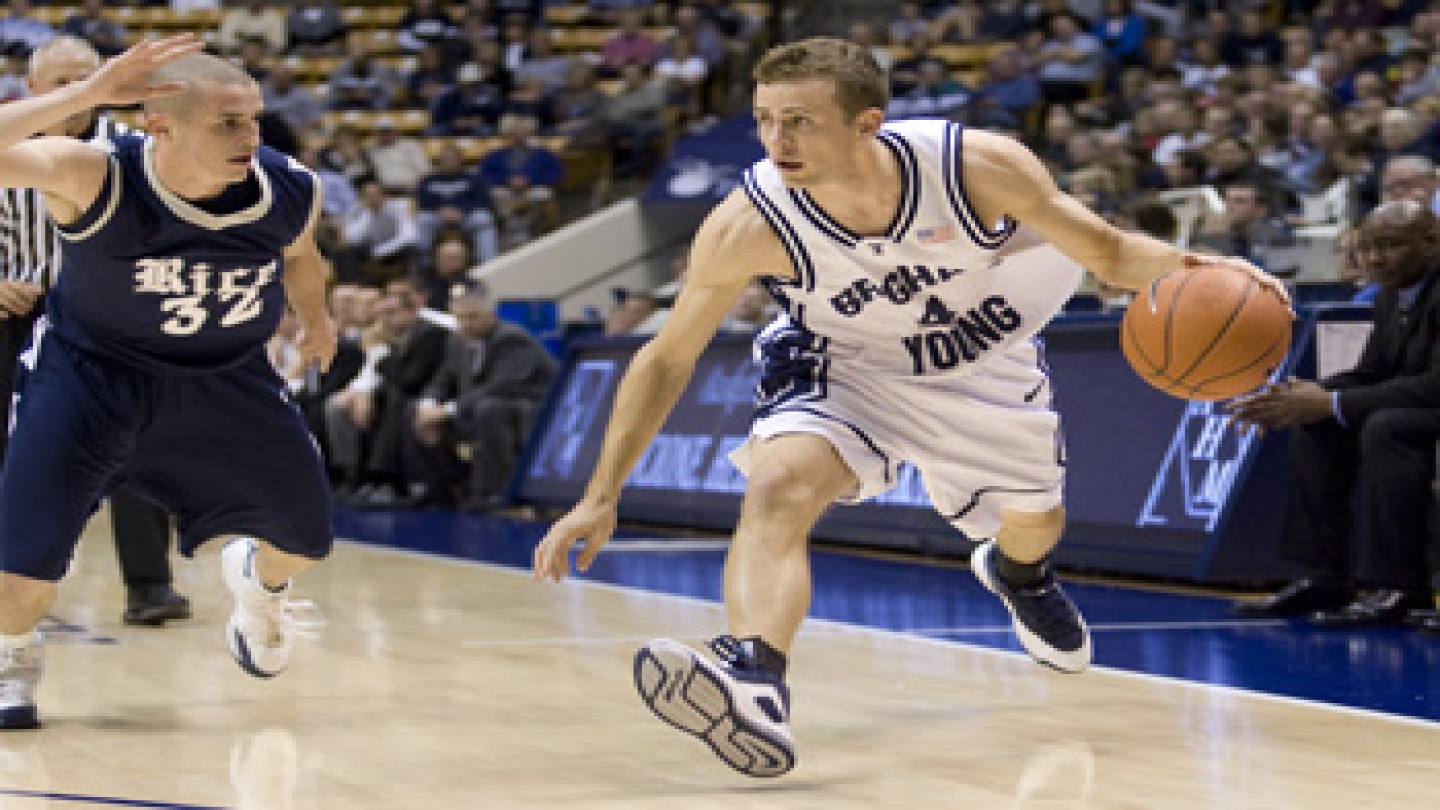 Cougars and Lobos to Square off on Tuesday

BYU men’s basketball (19-5, 7-3 MWC) will have a shot at redemption on Tuesday when the Cougars host New Mexico (16-9, 7-3) at 8 p.m. in the Marriott Center. The Lobos handed BYU its worst loss of the season on Jan. 17 in Albuquerque, 81-62. The Cougars and New Mexico are tied with San Diego State with three conference losses, one behind Utah with two. BYU is 11-2 at home overall and 4-1 at home in MWC play. Tuesday’s game will be televised live on The Mtn. while the radio broadcast can be heard on KSL Newsradio 102.7 FM and 1160 AM out of Salt Lake City and on the Internet at KSL.com beginning with the pregame show at 7 p.m. MT.

BYU leaves Provo for its toughest road trip of the season, playing at UNLV on Saturday, Feb. 21, at 8 p.m. PT. The Cougars then play at San Diego State on Tuesday, Feb. 24. Follow Saturday’s game at UNLV on www.byucougars.com and listen live on the radio beginning with the pregame show at 7 p.m. PT on KSL Newsradio 102.7 FM and 1160 AM out of Salt Lake City or via the Internet at KSL.com. The game will be televised live on CBS C.

New Mexico is 16-9 overall and tied with BYU at 7-3 in MWC action. The Lobos handed BYU its first loss in conference play, defeating the Cougars 81-62 on Jan. 17. New Mexico has won three straight, including home wins against Wyoming (86-57) and UNLV (73-59 in overtime) and at Air Force (76-66). The Lobos have lost at UNLV, at San Diego State and at Utah in MWC action. New Mexico averages 73.9 points per game and shoot 46.9 percent per game. The Lobos allow an average of 64.9 points per game while their opponents shot 40.0 percent per game. New Mexico is third in scoring and sixth in scoring defense. The Lobos are also third in field goal percentage and first in field goal percentage defense. Tony Dandridge leads the team in scoring (13.7) while Daniel Farris is second in scoring and second in rebounding (5.9). Chad Toppert comes off the bench to average 11.1 points per game and is one of the top shooters in the MWC, hitting 45.4 percent (64-141) from three — first in the MWC — and 85.7 percent on free throws. Roman Martinez also averages double figures at 10.8 points per game and is first on the team in boards per game (6.0 per contest). Dairese Gary leads the Lobos in assists at 4.2 per game. Steve Alford coaches the Lobos and has a 40-18 record in his second season as the head man of the Lobos. He is in his 18th season as an NCAA Division I head coach and has a career record of 348-201.

Tuesday’s game will be the 125th meeting between BYU and New Mexico. The Cougars own a 73-51 advantage over the Lobos — 42-15 in Provo (25-12 in the Marriott Center) and trail 27-32 in Albuquerque (17-27 in The Pit). BYU had dominated the series recently, winning the first six games between the schools during the Dave Rose era before losing 81-62 in Albuquerque on Jan. 17 earlier this season. Last season the Cougars won 83-66 at home and pulled out a 70-69 overtime win on the road. BYU will be looking to make it three-straight in The Pit. BYU has won eight straight in Provo against the Lobos with New Mexico’s last win in Provo coming on Feb. 17, 2000, 78-74.

1 BYU’s NCAA Division I ranking in team field goal percentage. The Cougars are shooting 51.2 percent from the field as a team.

3 The number of BYU players ranked in the top five scorers (all games) in the MWC: Lee Cummard (2), Jonathan Tavernari (4) and Jimmer Fredette (5).

4 The number of games in which BYU has scored 90-plus points this season.

5 The number of three-pointers Tavernari attempted without missing against Colorado State at home.

6 The number of consecutive games in which BYU has shot 50.0 percent or better. BYU is shooting 56.3 percent during that stretch, including 50.0 percent on threes. Also the number of points Jonathan Tavernari needs to pass Scott Runia for 36th all-time in scoring at BYU.

8 The number of statistical categories in which a BYU player ranks among the top three in the MWC (all games) out of 13 categories tracked by the league.

10 The number of statistical categories out of 19 tracked by the league in which BYU is ranked No. 1 as a team in the MWC.

11 The number of games in which Lee Cummard has hit 60.0 percent or better this season. He has hit better than 70.0 percent in six games.

12 The number of games in which Jimmer Fredette has attempted a free throw without missing.

16 The number of games BYU has won by double figures. The Cougars have won six games by 20-29 points and five games by 30-plus points

17 The number of games in which BYU has shot 50.0 percent or better this season. The Cougars are currently No. 3 in the nation in field goal percentage.

19 The number of consecutive games in which Jonathan Tavernari has hit a three-pointer, two games from tying the school season record held by Terrell Lyday. Tavernari has made a three in 23 of 24 games this season.

94 The number of conference wins for BYU since the formation of the MWC in 1999, first among all conference teams.

Including a career-high 36 points against Long Beach State and performances of 30 points against Weber State, 28 against Cal Poly and 26 at Tulsa, Lee Cummard now has 413 total points for the season and 1,426 for his career. He passed Jay Cheesman (1,408) for 11th all-time in scoring in BYU history during the TCU game. Cummard is 87 points from passing Kresimir Cosic (1,512) for 10th all-time.

With 17 points at Air Force junior forward Jonathan Tavernari surpassed 1,000 points for his career. He is six points from passing Scott Runia (1,051) for 36th all-time.

With a three at the 13:53 mark in the first half at TCU Jonathan Tavernari has hit a three in the last 19 games and in 23 of 24 games this season. He needs two more games with a trey to equal the BYU single-season record for consecutive games with a three held by Terrell Lyday (21) and three to tie the career mark of 22 games held by Mark Bigelow. Tavernari made a three in 20-straight games from the end of last season until going without a three against Cal Poly, the fifth game of this season.

After hitting two threes at TCU junior forward Jonathan Tavernari has 180 career threes, including 63 this season. He started the season with 117 threes and has passed Andy Toolson (141) and Mike Rose (163) and is now second all-time in school history in made threes and 34 from passing Mark Bigelow for first. Tavernari also has 483 attempts from downtown, good for second all-time in school history. Lee Cummard was a perfect 2-of-2 from downtown at TCU and now has 145 threes for his career, good for fourth all-time at BYU. He is 19 threes from passing Mike Rose for third all-time. Cummard is also fifth all-time in attempts with 326.