Game 24 - BYU and TCU to Meet for Valentine's Day Duel 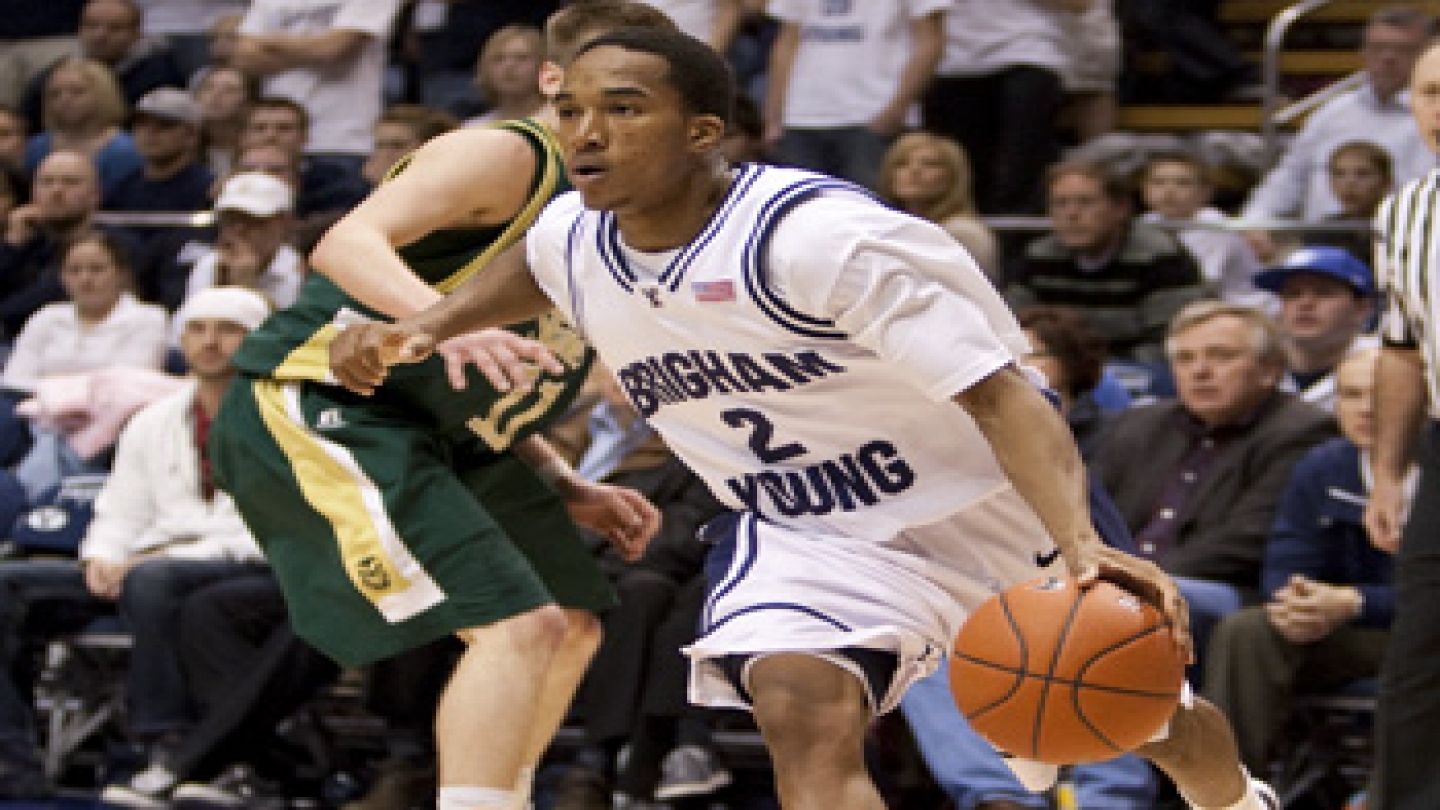 After playing at TCU, BYU returns to the Marriott Center to host New Mexico on Tuesday, Feb. 17, at 8 p.m. MT. Follow the game on www.byucougars.com and listen live on the radio beginning with the pregame show at 7 p.m. MT on KSL Newsradio 102.7 FM and 1160 AM out of Salt Lake City or via the Internet at KSL.com. The game will be televised live on The Mtn.

TCU is 13-11 overall and 4-6 in MWC action this season. The Horned Frogs are coming off a 71-57 loss at UNLV and have lost five-straight after starting the conference season with a 4-1 record. TCU has since lost to New Mexico and Utah at home and at San Diego State, Colorado State and UNLV. BYU handed the Horned Frogs their first MWC loss on Jan. 13 in Provo. TCU is eighth in the MWC in scoring at 64.6 points per game and third in scoring defense at 63.1 points per game. The Horned Frogs shoot 44.0 percent (6th) as a team while allowing opponents to shoot 45.2 percent (8th). TCU is last in the league in three-point shooting at 33.8 percent and 142 makes in 24 games. Kevin Langford leads the Horned Frogs in scoring (14.3 ppg, 13th in the MWC) and is second on the team in rebounding (5.0 rpg). Zvonko Buljan is second on the team in scoring (11.7 ppg) and first in rebounding (7.4 rpg, third in the MWC). He also leads the team in field goal percentage at 51.9 percent (ninth in the MWC). Edvinas Ruzgas and Ronnie Moss also average double figures at 10.7 and 10.0 points per game, respectively. Ruzgas leads the team in made threes with 49 while shooting 34.8 percent from downtown. Jason Ebie is the team’s top distributor at 3.9 assists per game, fourth best in the MWC. Jim Christian is in his first season coaching TCU. Prior to taking the head job at TCU he was the coach at Kent State for six seasons. He compiled a record of 138-58 and won at least 20 games in each of his six seasons guiding the Golden Flashes.

Saturday’s game will be the 16th meeting between the two schools and the ninth since TCU joined the Mountain West Conference in a series that dates back to 1953. BYU leads the series 12-3 and has won the last nine meetings, including all eight MWC matchups — all under Dave Rose. Last season the Cougars won 83-72 in Provo and 61-54 in Fort Worth, Texas. BYU won the first meeting this season 73-61 in Provo. BYU is 7-1 in Provo (5-1 in the Marriott Center) and 3-1 at TCU. The Cougars won the first three meetings in the series — two games in 1953 and one in 1960 — before losing three straight. BYU has since won nine straight.

3 The number of BYU players ranked in the top five scorers (all games) in the MWC: Lee Cummard (3), Jonathan Tavernari (4) and Jimmer Fredette (5).

4 The number of games in which BYU has scored 90-plus points this season.

5 The number of points Jonathan Tavernari needs to pass Bernie Fryer for 37th all-time in scoring at BYU. Also the number of three-pointers Tavernari attempted without missing against Colorado State at home.

7 The number of statistical categories in which a BYU player ranks among the top three in the MWC (all games) out of 13 categories tracked by the league. Also the number of points Lee Cummard needs to pass Jay Cheesman for 11th all-time in scoring at BYU.

10 The number of statistical categories out of 19 tracked by the league in which BYU is ranked No. 1 as a team in the MWC. Also the number of games in which Lee Cummard has hit 60.0 percent or better this season. He has hit better than 70.0 percent in six games.

12 The number of consecutive free throws made by Jimmer Fredette and the number of games in which Fredette has attempted a free throw without missing.

15 The number of games BYU has won by double figures. The Cougars have won six games by 20-29 points and five games by 30-plus points

16 The number of games in which BYU has shot 50.0 percent or better this season. The Cougars are currently No. 3 in the nation in field goal percentage.

18 The number of consecutive games in which Jonathan Tavernari has hit a three-pointer, three games from tying the school season record held by Terrell Lyday. Tavernari has made a three in 22 of 23 games this season.

28 The number of assists BYU had against Colorado State, a team season high. The Cougars assisted 13 of their first 14 buckets and had 17 dimes at the break. It marks the most assists for BYU since dishing out 29 against Eastern Washington on Dec. 27, 2005.

45 The number of points BYU scored in the first 11:03 of the second half against Boise State. The Cougars finished the half with 61 points, a season high, and the game with 94 points, tying a season high.

93 The number of conference wins for BYU since the formation of the MWC in 1999, first among all conference teams.

Including a career-high 36 points against Long Beach State and performances of 30 points against Weber State, 28 against Cal Poly and 26 at Tulsa, Lee Cummard now has 389 total points for the season and 1,402 for his career. He passed Andy Toolson for 12th all-time in scoring in BYU history during the Colorado State game. Cummard is seven points from passing Jay Cheesman (1,408) for 11th all-time.

With 17 points at Air Force junior forward Jonathan Tavernari surpassed 1,000 points for his career. He scored 21 against Colorado State to give him 1,027 career points and move him into 38th all-time. He is five points from passing Bernie Fryer (1,031) for 37th all-time.

After going a career-best 5-of-5 from downtown against Colorado State junior forward Jonathan Tavernari has 178 career threes, including 61 this season. He started the season with 117 threes and has passed Andy Toolson (141) and Mike Rose (163) and is now second all-time in school history in made threes and 36 from passing Mark Bigelow for first. Tavernari also has 478 attempts from downtown, good for second all-time in school history. Lee Cummard was a perfect 3-of-3 from downtown at Utah and now has 143 threes for his career, good for fourth all-time at BYU. He is 21 threes from passing Mike Rose for third all-time. Cummard is also fifth all-time in attempts with 324.