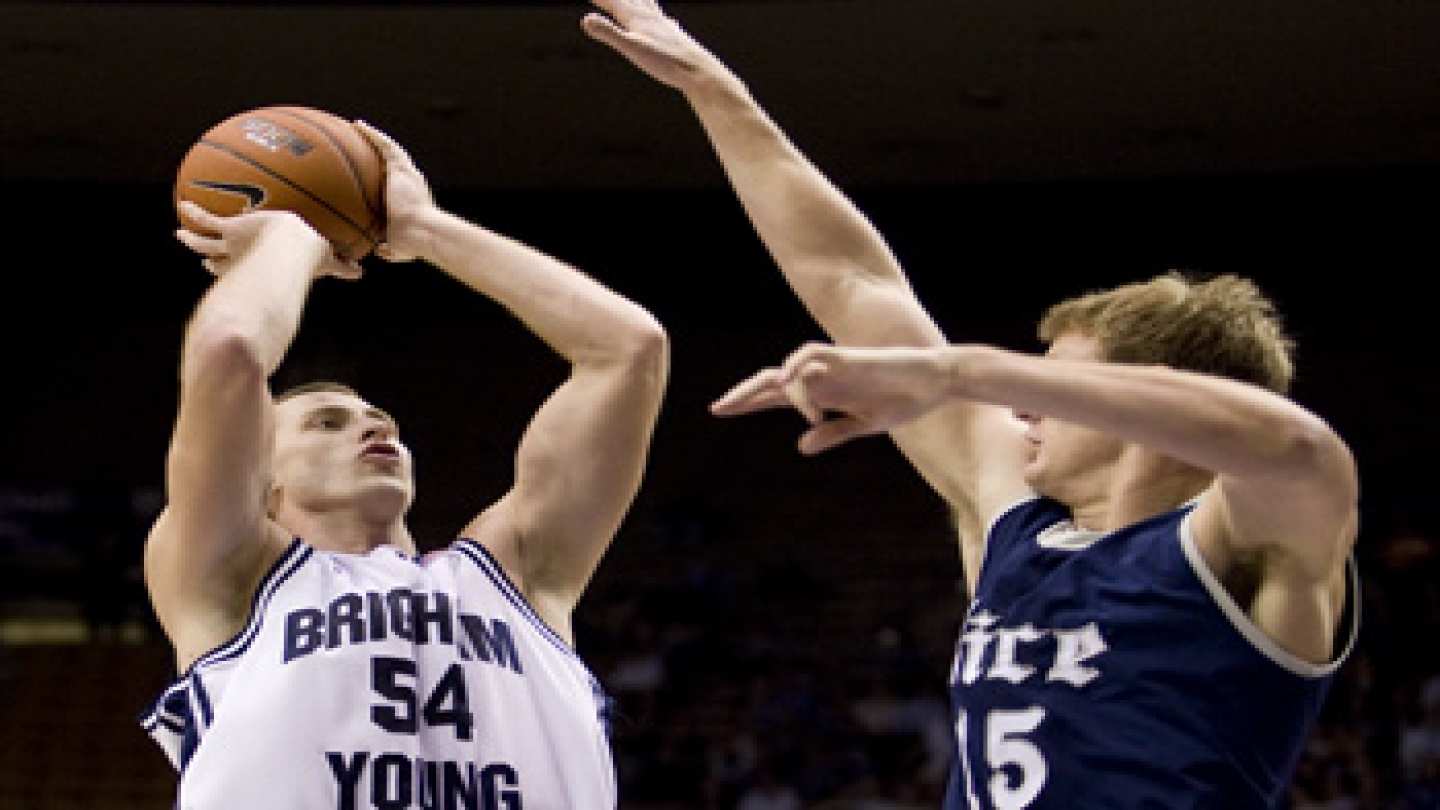 BYU leads, 85-46, including five-straight victories over the Rams

BYU men’s basketball (17-5, 5-3 MWC) begins the second half of the conference season by hosting Colorado State (8-15, 3-6) on Wednesday, Feb. 11, at 6 p.m. The Cougars are currently riding a two-game winning streak and looking to keep pace with league leaders San Diego State and Utah in the race for the MWC regular season title. BYU is 10-2 at home this season, including a 4-1 home record in conference games. Wednesday’s game will be televised on The Mtn. while the radio broadcast can be heard on KSL Newsradio 102.7 FM and 1160 AM out of Salt Lake City and on the Internet at KSL.com beginning with the pregame show at 5 p.m. MT.

After hosting Colorado State, BYU head to Fort Worth, Texas, to take on TCU on Saturday, Feb. 14, at 6:30 p.m. CT. Follow the game on www.byucougars.com and listen live on the radio beginning with the pregame show at 5:30 p.m. MT on KSL Newsradio 102.7 FM and 1160 AM out of Salt Lake City or via the Internet at KSL.com. The game will be televised live on The Mtn.

— Lee Cummard is tied for 12th all-time in scoring at BYU with Andy Toolson with 1,388 points. Jonathan Tavernari reached the 1,000-point mark with 17 points at Air Force. He has 1,006 for his career.

Colorado State is 8-15 overall and 3-6 in MWC action this season. The Rams are coming off a 71-65 home win against TCU. Colorado State had lost three straight — at Wyoming and New Mexico and at home against San Diego State — prior to the win over TCU. The Rams average 68.6 points per game (7th in the MWC) and allow opponents to score 72.2 points per game (8th in the MWC). As a team they shoot 43.5 percent from the field (7th) while their opponents shoot 47.0 percent (9th). Colorado State is second in the league in offensive rebounds per game at 11.39. Marcus Walker leads the Rams in scoring at 15.3 points per game (13.2 in conference play) and Andy Ogide is second at 10.0 points per game and is first in rebounding at 6.5 boards per contest. Willis Gardner averages 9.2 points per game while Jesse Carr averages 9.0 and is first on the team in assists at 2.4 per game. Andre McFarland leads the Rams in three-point shooting at 43.2 percent. He has 38 makes in 23 games. Colorado State head coach Tim Miles has juggled the starting lineup all season as 11 different players have started at least two games. Andre McFarland is the only player to have started all 23 games. Miles is in his second season at Colorado State and has a record of 15-40 with the Rams.

FORT COLLINS, Colo. (AP) - Marcus Walker scored 20 points and Jesse Carr added 16 as Colorado State snapped a three-game losing streak with a 71-65 victory over TCU Saturday night. Walker scored 16 of his points in the second half for Colorado State (8-15, 3-6 Mountain West). Harvey Perry had five of his 11 points in the final two minutes. Kevin Lankford led TCU (13-10, 4-5) with 19 points. Edvinas Ruzgas and Ronnie Moss had 11 each for the Horned Frogs, who lost for the fourth straight time. TCU led by as many as nine points in the second half and took its last lead, 58-57, on two free throws by Ruzgas with 3:48 left. Walker tied the game at 58-58 with a free throw, and Carr’s layup put the Rams ahead for good with 2:28 remaining.

Wednesday’s game will be the 132nd meeting between the two schools in a series that dates back to 1938. BYU leads the series 85-46 and has won five-straight, including a home win in 2007, three wins last season and an 86-60 win at Colorado State this season. The Cougars own a 54-10 record in Provo (32-6 in the Marriott Center) against Colorado State while the Rams hold a 33-29 advantage in Fort Collins. The Cougars have won eight of the last nine overall and nine straight in Provo since Colorado State swept the series in 1998.

Including a career-high 36 points against Long Beach State and performances of 30 points against Weber State, 28 against Cal Poly and 26 at Tulsa, Lee Cummard now has 375 total points for the season and 1,388 for his career. He is now tied with Andy Toolson for 12th all-time in scoring in BYU history. Cummard is 21 points from passing Jay Cheesman for 11th all-time.

With 17 points at Air Force junior forward Jonathan Tavernari surpassed 1,000 points for his career and now has 1,006. His second of two made free throws with 15:02 remaining in the game gave him his 1,000th-career point.

With a three at the 17:10 mark in the first half at Air Force Jonathan Tavernari has hit a three in the last 17 games and in 21 of 22 games this season. He needs four more games with a trey to equal the BYU single-season record for consecutive games with a three held by Terrell Lyday (21) and five to tie the career mark of 22 games held by Mark Bigelow. Tavernari made a three in 20-straight games from the end of last season until going without a three against Cal Poly, the fifth game of this season.

With one three at Air Force junior forward Jonathan Tavernari has 173 career threes, including 56 this season. He started the season with 117 threes and has passed Andy Toolson (141) and Mike Rose (163) and is now second all-time in school history in made threes. Tavernari also has 473 attempts from downtown, good for second all-time in school history. Lee Cummard was a perfect 3-of-3 from downtown at Utah and now has 143 threes for his career, good for fourth all-time at BYU. He is 21 from passing Mike Rose for third all-time. Cummard is also fifth all-time in attempts with 322.

With 19 steals this season Lee Cummard is now tied for seventh all-time in BYU history in career steals with Randy Reid with 118. Cummard had 16 steals as a freshman, 50 as a sophomore and 33 last season. He is seven steals from passing Matt Montague for sixth all-time. Jonathan Tavernari is also climbing the list with 41 thefts this season — including a career-high tying five vs. UNLV — and 107 for his career. He is 10th all-time at BYU in career steals.

BYU coach Dave Rose coached his 120th game as the head coach of the Cougars when BYU defeated Air Force on Feb. 3. His career record through 120 games of 89-31 (.742) is the best record for a BYU men’s basketball coach through his first 120 games. Rose is three games better than the next best coach, Roger Reid. Below are the records of BYU coaches through their first 120 games and their career records.

Since arriving at BYU as a freshman in 2005-06 senior Lee Cummard has not missed a single game. His streak of 120 games played is tied for the eighth longest such streak in school history. Cummard has also started the last 91 games he has played, dating back to the first game of the 2006-07 season, a streak that is tied for the fifth longest in school history. In his career Cummard has played in 120 games and with eight regular season games remaining, the MWC tournament and the possibility of postseason play he has the potential to claim the top spot in career games played (Nathan Call and Russell Larsen are tied for the top spot with 129 games played). Below are the streaks for consecutive games started and consecutive games played.