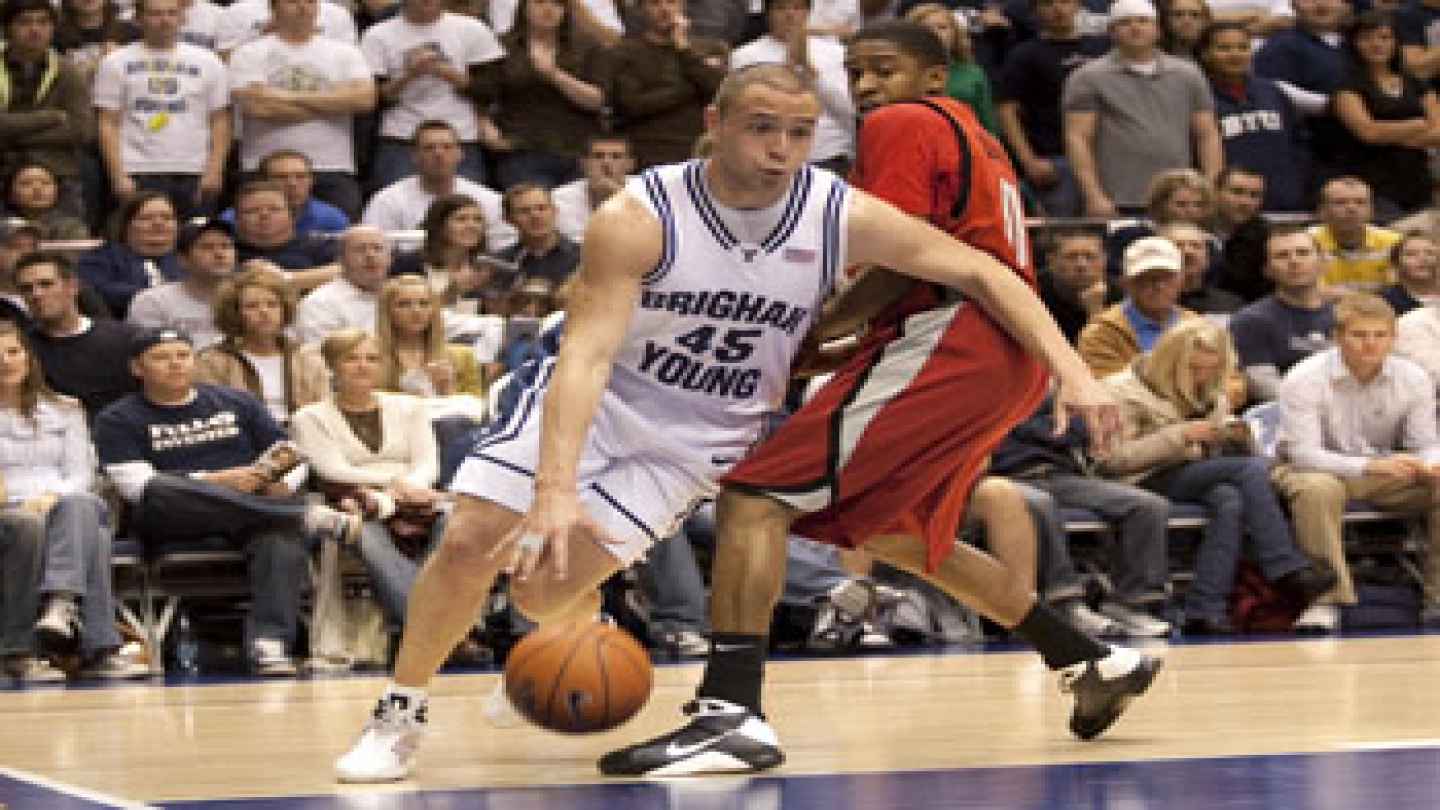 BYU leads, 47-12, including five-straight victories over the Falcons

BYU men’s basketball (16-5, 4-3 MWC) will wrap up the first half of the conference season with a trip to Air Force (9-11, 0-7) on Tuesday, Feb. 3, at 6 p.m. The Cougars are looking to tie for the second-best record in the conference entering the second half of the MWC schedule. BYU is 1-2 on the road in conference action including a win at Colorado State and losses at New Mexico and Utah. Tuesday’s game will be televised on The Mtn. while the radio broadcast can be heard on KSL Newsradio 102.7 FM and 1160 AM out of Salt Lake City and on the Internet at KSL.com beginning with the pregame show at 5 p.m. MT.

Following the Air Force game BYU will have a one-week break before beginning the second half of the conference schedule on Wednesday, Feb. 11, at home against Colorado State at 6 p.m. Follow the game on www.byucougars.com and listen live on the radio beginning with the pregame show at 5 p.m. MT on KSL Newsradio 102.7 FM and 1160 AM out of Salt Lake City or via the Internet at KSL.com. The game will be televised live on The Mtn.

— Lee Cummard is now 13th all-time in scoring at BYU with 1,376 points. He is 13 points from passing Andy Toolson for 12th. Jonathan Tavernari is 11 points from reaching 1,000 for his career.

Air Force is 9-11 overall and 0-7 in MWC action. The Falcons are 7-6 at home but have dropped their last four — all conference games against San Diego State, TCU, Utah and UNLV. Air Force is last in the conference in scoring at 60.1 points per game and is second in points allowed at 60.2. The Falcons shoot 44.1 percent from the floor as a team and their opponents shoot just below 40.0 percent at 39.9 percent — also second in the league. Air Force is the second-best three-point shooting team in the conference at 38.1 percent and makes 6.5 treys per game. The three leading scorers for the Falcons are seniors in Anwar Johnson (13.4 ppg), Matt Holland (11.5 ppg) and Andrew Henke (11.1 ppg). Sophomore Evan Washington leads the team on the boards at 4.8 rebounds per game while contributing 7.5 points per contest. Holland is first in the conference in three-point shooting at 44.8 percent and leads the Falcons in shooting from the field (51.3 percent) and the line (79.3 percent). Jeff Reynolds is in his second season coaching the Falcons. He led Air Force to a 16-14 record last season and has a career mark of 107-59. Reynolds is coaching his sixth season overall as a head coach.

AIR FORCE ACADEMY, Colo. (AP) -Joe Darger had a game-high 18 points and UNLV connected on 12 3-pointers as the Rebels handed Air Force its eighth straight loss, 59-38, Saturday afternoon. The Rebels attempted 30 shots from 3-point range, with Kendall Wallace scoring all of his 15 points from beyond the arc. Wink Adams added 13 points for UNLV, while Matt Holland led Air Force with 13 points. The Falcons hit just 5-of-20 shots from 3-point range and shot 35 percent from the field in the loss, their ninth in 10 games. UNLV improved to 17-4 on the season, 5-2 in the Mountain West Conference, while Air Force fell to 9-11 overall and 0-7 in conference play.

Tuesday’s game will be the 60th meeting between BYU and Air Force with the Cougars owning a 47-12 advantage, including 20-7 in Clune Arena. BYU has won five-straight against the Falcons and is 5-1 vs. Air Force under Dave Rose. The Cougars recorded two wins over a ranked Falcon squad in 2006 including a 61-52 victory over No. 13 Air Force in the Marriott Center and a 62-58 win over the No. 25 Falcons in Colorado Springs. Last season BYU won 69-53 on the road and 76-57 at home. In a series typically dominated by the Cougars the Falcons won four of five from 2004 to 2006, including three victories at Clune Arena and one in the Marriott Center.

Including a career-high 36 points against Long Beach State and performances of 30 points against Weber State, 28 against Cal Poly and 26 at Tulsa, Lee Cummard now has 363 total points for the season and 1,376 for his career. He is now 13th all-time in scoring in BYU history having passed Trent Plaisted (1,372) and Roland Minson (1,375) during the Wyoming game. He is 13 points from passing Andy Toolson for 12th all-time.

Junior forward Jonathan Tavernari is fast approaching the 1,000-point club. Coming into the season he had 640 career points and with 349 points so far this season and 989 for his career, Tavernari is now 11 points from reaching 1,000 for his career.

With two treys at Utah junior forward Jonathan Tavernari has 172 career threes, including 55 this season. He started the season with 117 threes and has passed Andy Toolson (141) and Mike Rose (163) and is now second all-time in school history in made threes. Tavernari also has 470 attempts from downtown, good for second all-time in school history. Lee Cummard was a perfect 3-of-3 at Utah and now has 143 threes for his career, good for fourth all-time at BYU. He is 21 from passing Mike Rose for third all-time. Cummard is also tied for fifth all-time in attempts with 321.

With 19 steals this season Lee Cummard is now tied for seventh all-time in BYU history in career steals with Randy Reid with 118. Cummard had 16 steals as a freshman, 50 as a sophomore and 33 last season. He is seven steals from passing Matt Montague for sixth all-time. Jonathan Tavernari is also climbing the list with 38 thefts this season — including a career-high tying five vs. UNLV — and 104 for his career. He is now 10th all-time at BYU in career steals.