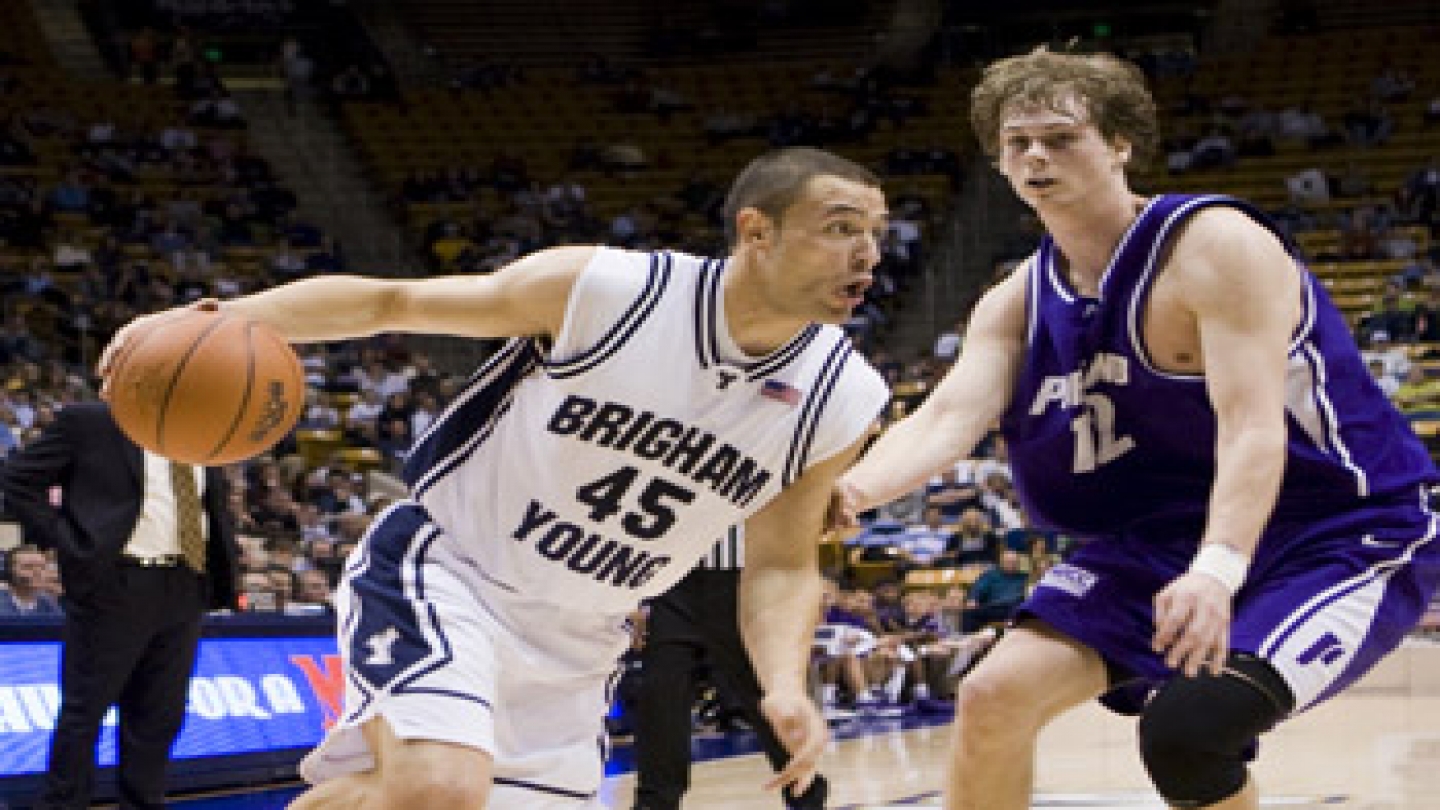 BYU (14-3, 2-1) is looking to bounce back from a road loss at New Mexico when the Cougars take on UNLV (14-4, 2-2) on Wednesday at the Marriott Center at 8 p.m. The two-time defending league champion Cougars are off to their best start since the 1999-2000 season. BYU trails UNLV 14-13 in the all-time series against the Rebels and has dropped three of four overall. The Cougars have won three-straight in the Marriott Center against the Rebels. Saturday’s game can be heard live on the radio beginning with the pregame show at 7 p.m. MT on KSL Newsradio 102.7 FM and 1160 AM out of Salt Lake City or via the Internet at KSL.com. The game will be televised live on CBS C.

BYU will play its second game at the Marriott Center this week when the Cougars take on San Diego State on Saturday, Jan. 24 at 7 p.m. MT. The Cougars defeated the Aztecs 59-56 at home last season behind 17 points and 11 rebounds from Trent Plaisted. Follow the game on www.byucougars.com and listen live on the radio beginning with the pregame show at 6 p.m. MT on KSL Newsradio 102.7 FM and 1160 AM out of Salt Lake City or via the Internet at KSL.com. The game will be televised live on The Mtn.

— BYU’s school record 53 game home winning streak ended with a 94-87 loss to Wake Forest. The Cougars have started a new streak that is at two games with wins against Western Oregon and TCU. BYU has won 55 of 56 at home.

UNLV is 14-4 overall and 2-2 in MWC action this season, including an 83-66 home win over Wyoming on Jan. 17. The preseason MWC favorite Rebels ended a two-game losing streak that included losses at TCU and at Colorado State with the win over the Cowboys. They opened conferece play with a 60-58 home win over New Mexico. As a team UNLV averages 71.3 points per game and shoots 43.3 percent from the field. UNLV opponents average 64.3 points and shoot 42.1 percent. The Rebels shoot 34.5 percent on threes and lead the MWC in threes per game at 8.0. UNLV averages 1.8 fewer rebounds per game that its foes but has a turnover margin of +3.7. Senior guard Wink Adams leads the team in scoring at 13.3 points per game but has struggled shooting from the field with a 35.3 field goal percentage. Rene Rougeau averages 11.2 points per game, shoots a team-best 58.0 percent from the field and leads the team in rebounding (7.6 per game) and blocked shots (37 total). Tre’Von Willis also averages double figures at 11.0 points per game. Head coach Lon Kruger is in his fifth season at UNLV where he has compiled a record of 105-46.

Saturday’s game will be the 28th meeting between BYU and UNLV. The Rebels lead the all-time series 14-13 and have won three of the last four meetings, including two games last year in Las Vegas (the regular season meeting and the MWC tournament championship game). The Cougars have won three-straight against UNLV in the Marriott Center, dating back to a 75-72 win in 2006. In 2007 BYU won 90-63 over then-No. 25 UNLV and in 2008 the Cougars won 74-48.

Including a career-high 36 points against Long Beach State and performances of 30 points against Weber State, 28 against Cal Poly and 26 at Tulsa, Lee Cummard now has 297 total points for the season and 1,310 for his career. He is now 17th all-time in scoring in BYU history and is eight points from passing Joe Nelson for 16th all-time.

Junior forward Jonathan Tavernari is fast approaching the 1,000-point club. Coming into the season he had 640 career points and with 293 points so far this season and 933 for his career, Tavernari is now 67 points from reaching 1,000 for his career.

With three treys at New Mexico junior forward Jonathan Tavernari has 162 career threes, including 45 this season. He started the season with 117 and has passed Andy Toolson for third place and is two makes from downtown from passing Mike Rose (163) for second. Tavernari also has 442 attempts from downtown, good for second all-time in school history. Lee Cummard has 136 threes for his career, six threes from passing Andy Toolson for fourth.

With 16 steals this season Lee Cummard has climbed to ninth all-time in BYU history in career steals with 115. Cummard had 16 as a freshman, 50 as a sophomore and 33 last season. He is two steals from passing Mark Bigelow for eighth all-time. Jonathan Tavernari is also climbing the list with 29 thefts this season and 95 for his career. He is now 14th all-time at BYU in steals.

Since arriving at BYU as a freshman in 2005-06 senior Lee Cummard has not missed a single game. His streak of 115 games played currently ranks 11th for the longest such streak in school history. Cummard has also started the last 86 games he has played, dating back to the first game of the 2006-07 season, a streak that ranks seventh longest in school history. In his career Cummard has played in 115 games and with 13 regular season games remaining, the MWC tournament and the possibility of postseason play he has the potential to claim the top spot in career games played. Below are the streaks for consecutive games started and consecutive games played.