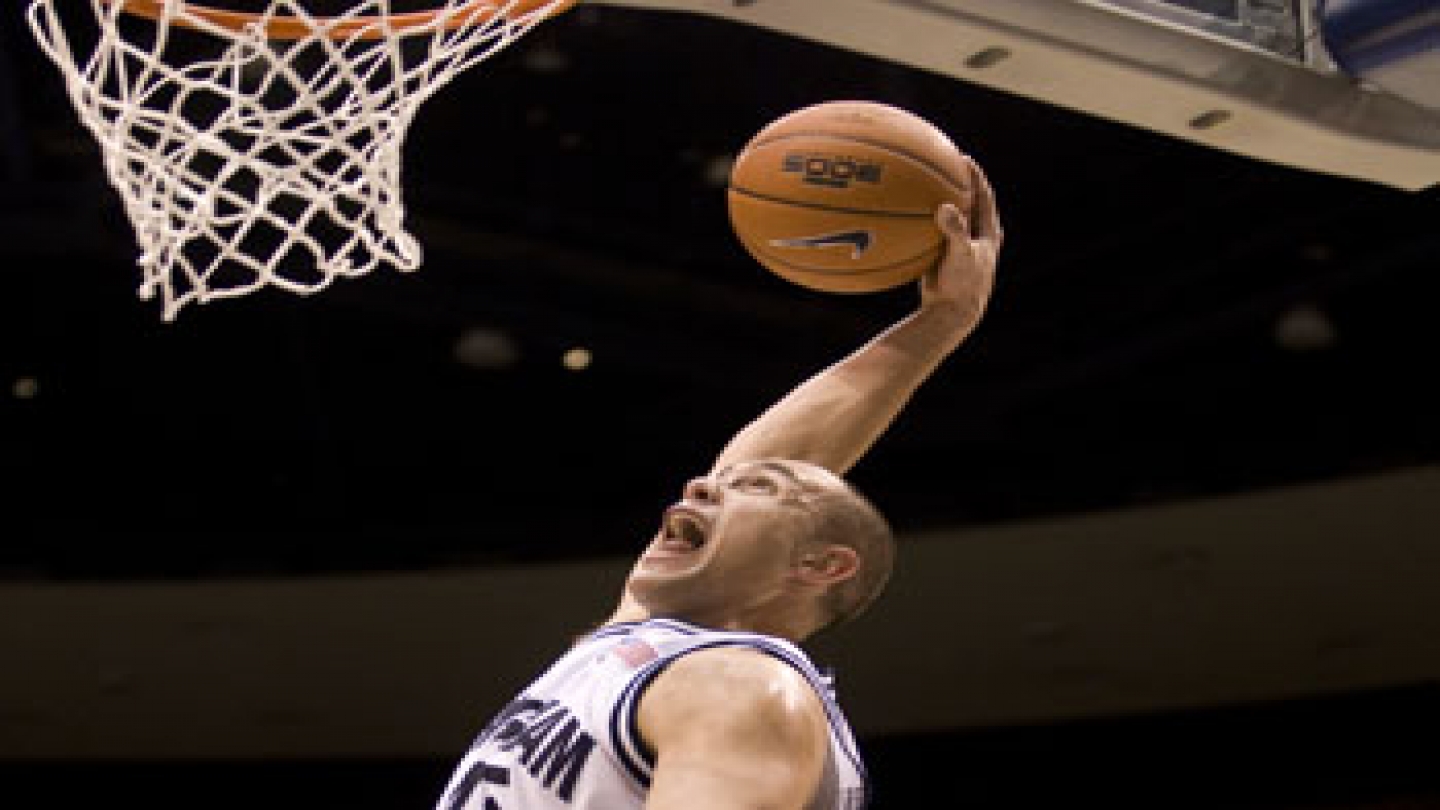 Cougars to Play New Mexico at The Pit

BYU (14-2, 2-0) improved to 2-0 in the MWC with a home win against TCU and will hit the road to face New Mexico (10-7, 1-1) in The Pit on Saturday at 2 p.m. The two-time defending league champion Cougars are off to their best start since the 1987-88 season and their only losses this season have come against ranked foes Arizona State (No. 15) and Wake Forest (No. 2). BYU leads the all-time series against New Mexico 73-50 and has won the last six meetings — all under Coach Dave Rose. Saturday’s game can be heard live on the radio beginning with the pregame show at 1 p.m. MT on KSL Newsradio 102.7 FM and 1160 AM out of Salt Lake City or via the Internet at KSL.com. The game will be televised live on the Versus.

BYU returns to the Marriott Center to play UNLV on Wednesday, Jan. 21 at 8 p.m. MT. The Cougars are 8-1 at home this season and will be looking to add to their new two-game home winning streak when they play the Rebels. Follow the game on www.byucougars.com and listen live on the radio beginning with the pregame show at 7 p.m. MT on KSL Newsradio 102.7 FM and 1160 AM out of Salt Lake City or via the Internet at KSL.com. The game will be televised live on CBS C.

— BYU’s school record 53 game home winning streak ended with a 94-87 loss to Wake Forest. The Cougars have started a new streak that is at two games with wins against Western Oregon and TCU. BYU has won 55 of 56 at home.

New Mexico is 10-7 overall and 1-1 in MWC action this season, including a recent 78-53 home win over Air Force. The Lobos were coming off a road loss to UNLV (60-58) and a home loss to UTEP (73-60). New Mexico is 8-2 at home with losses to UTEP and Central Florida. The Lobos average 73.5 points per game and shoot 45.9 percent from the field while allowing opponents to score 65.7 points per game and shoot 39.1 percent. New Mexico shoots 38.1 percent from downtown and hits 7.4 treys per game. Senior guard Tony Dandridge leads the team in scoring at 13.3 points per game and has scored in double figures in the past 10 games. Senior forward Daniel Faris is second on the team in scoring (11.3) and leads the squad in rebounding (6.2 per game). Faris is third in the MWC in blocks per game (1.7). Senior guard Chad Toppert is one of the best sixth-men in the league averaging 10.6 points off the bench while shooting 42.9 percent from downtown. He has hit a team-high 45 threes in 17 games. Roman Martinez also averages double figure scoring at 10.0 points per game and is second on the team in boards per game (5.8). Point guard Dairese Gary leads the team in assists with 74 (4.4 per game).

Saturday’s game will be the 124th meeting between BYU and New Mexico. The Cougars own a 73-50 advantage over the Lobos — 42-15 in Provo (25-12 in the Marriott Center) and 27-31 in Albuquerque (17-26 in The Pit). BYU has dominated the series recently having won all six games between the schools during the Dave Rose era. Last season the Cougars won 83-66 at home and pulled out a 70-69 overtime win on the road. BYU will be looking to make it three-straight in The Pit. The last time the Cougars lost on the road to New Mexico was in 2005.

Including a career-high 36 points against Long Beach State and performances of 30 points against Weber State, 28 against Cal Poly and 26 at Tulsa, Lee Cummard now has 290 total points for the season and 1,301 for his career. He is now 17th all-time in scoring in BYU history and is 17 points from passing Joe Nelson for 16th all-time. Cummard scored 22 points against TCU to pass Alan Taylor (1,284) and Dick Nemelka (1,299).

Junior forward Jonathan Tavernari is fast approaching the 1,000-point club. Coming into the season he had 640 career points and with 280 points so far this season, Tavernari is now 80 points from reaching 1,000 for his career.

With two treys against TCU junior forward Jonathan Tavernari has 159 career threes, including 42 this season. He started the season with 117 and has passed Andy Toolson for third place and is five downtown makes from passing Mike Rose (163) for second. Tavernari also has 435 attempts from downtown, good for second all-time in school history. Lee Cummard has 135 threes for his career, seven threes from passing Andy Toolson for fourth.

With 13 steals this season Lee Cummard has climbed to ninth all-time in BYU history in career steals with 112. Cummard had 16 as a freshman, 50 as a sophomore and 33 last season. He is five from passing Mark Bigelow for eighth all-time. Jonathan Tavernari is also climbing the list with 28 thefts this season and 94 for his career. He is now 14th all-time at BYU in steals.

BYU’s two losses this year have come against No. 16 (then No. 20) Arizona State (76-75) on a neutral floor and No. 2 (then No. 6) Wake Forest (94-87) at home. BYU led Wake Forest until the Demon Deacons tied the score at 72-all at the 8:33 mark. The Cougars were within two at the 1:25 mark at 87-85 and within three at 88-85 at the 0:45 mark. Against Arizona State BYU led throughout the second half until the Sun Devils tied the score at 75-all with 1:00 remaining. James Harden hit a free throw with nine seconds remaining to give Arizona State its only lead of the half. Charles Abouo hit a potential game winner for BYU that was initially called good on the court but was overturned after a review by the officials. Arizona State and Wake Forest have a combined record of 28-2.