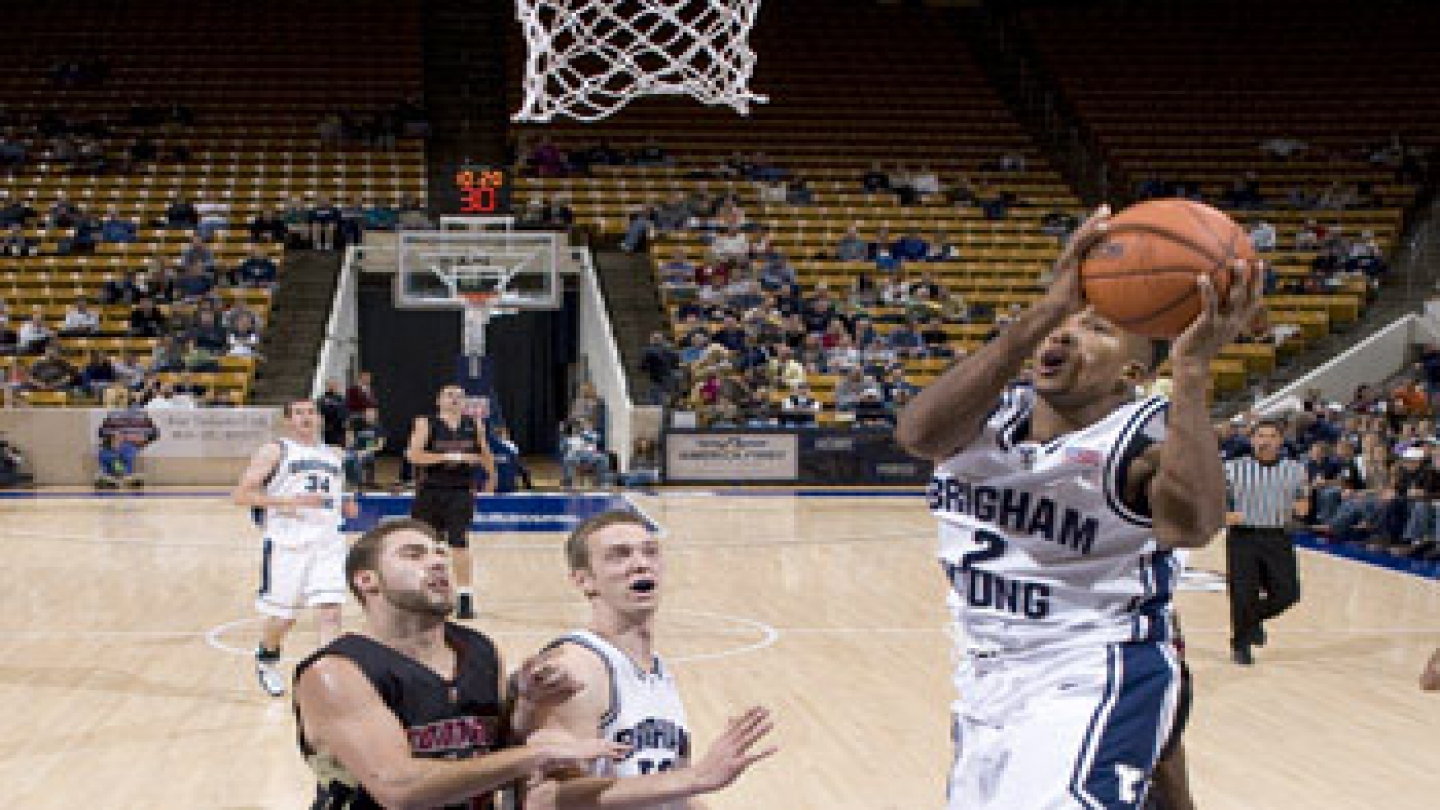 PROVO -- In its first exhibition game of the 2008-09 season, the BYU men’s basketball team handily defeated Concordia 96-54 at home in the Marriott Center. The 42-point victory matched the offensive productivity seen last season when the Cougars notched 20 double-digit wins.

“There were a lot of good things tonight,” said BYU head coach Dave Rose. “The best part of your first exhibition game is that you have the opportunity to watch film and break down things we need to improve on. That’s our focus right now.”

Sophomore Jimmer Fredette led all scorers with 26 points, going 6-of-8 from behind the new three-point line. Team captains Lee Cummard and Jonathan Tavernari both contributed 15 points apiece with Cummard leading the team with nine rebounds.

“Jimmer [Fredette] played two positions tonight and had the most minutes,” said Rose. “He shot the ball well and had good stats. It looks like that point guard spot is between Lamont [Morgan, Jr.] and Jimmer at this point. It seems most of Jimmer’s aggressiveness came at the point guard position.”

Returning starters Tavernari and Cummard were joined in the starting lineup by Fredette, and juniors Lamont Morgan, Jr. and Chris Miles. Combined, the starting five contributed 65 of the team’s 96 total points.

Reigning Mountain West Conference Player of the Year Cummard picked up where he left off last season, scoring seven of BYU’s first nine points. After jumping out to quick 5-0 start, the Stingers went on a 7-2 run to overtake the lead before a running layup by Cummard put the Cougars up 9-7 heading into the game’s first media timeout.

Fredette extended the BYU lead to four points after a made three-pointer with 13:46 remaining in the first half. The pace slowed down with alternating trips to the free-throw line by both teams.

After Tavernari scored his first points of the game on a beneath-the-basket make with 9:08 to play in the half, his steal on Concordia’s following possession helped set up a dunk for newcomer Charles Abouo. In what seemed like deja vu, Tavernari recovered a Stinger turnover on the ensuing play resulting in a second dunk by Abouo, much to the delight of those in attendance.

Back-to-back makes by Tavernari capped a 21-4 run by the Cougars, giving them a 39-19 lead with 4:20 remaining until the halftime break. With under one minute to play in the half, Tavernari made his first three-pointer of the night to help put BYU up 23 points at the half.

After making two three-pointers in the first half, Fredette came out strong to start the second, connecting on 3-of-3 attempts from beyond the arc in the first five minutes. Tough defense and turnovers on both sides of the ball kept either team from scoring for the next two minutes until Morgan drew a foul on a fast-break layup, giving the Cougars a 78-39 lead.

A blocked shot by Miles with 7:34 remaining in the game was quickly followed by an Abouo layup to increase BYU’s lead to 31 points. The Cougar lead continued to build after another three–pointer by Fredette and contributions from redshirt freshmen James Anderson and Matthew Pinegar.

The Cougars will play their second exhibition game on Nov. 11 at home against Georgetown College at 7:30 p.m. MT. The 2008-09 season opener is Nov. 14 against Long Beach State.