National Player of the Year 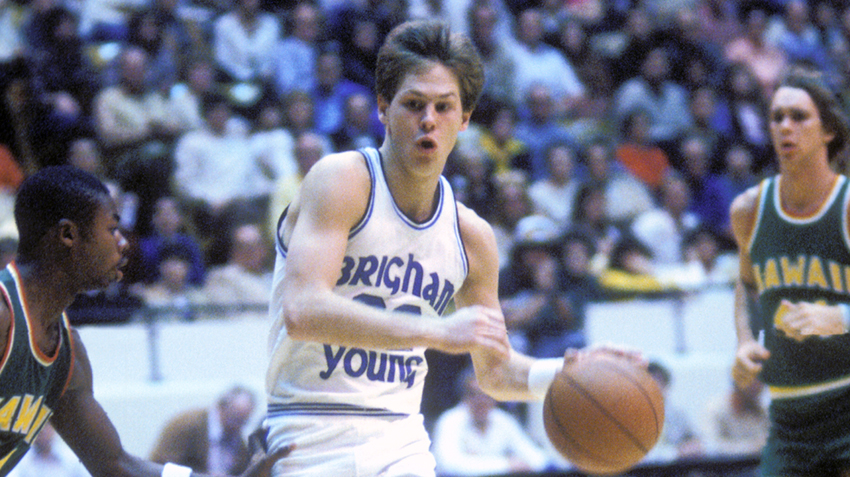 Known for his feisty, hard-nosed playing style, Danny Ainge has become one of the most famous athletes to graduate from BYU.

During his four-year career as a Cougar, Ainge was a Consensus All-American, a two-time first-team Academic All-American, the WAC Player of the Year and a four-time All-WAC selection. He set an NCAA record with 112 consecutive games scoring in double digits and broke the BYU and WAC all-time scoring records with 2,467 points.

As a senior in 1981, Ainge led BYU to the 1981 Eastern Regionals. He concluded his senior season by winning the Eastman Award as well as the John Wooden Award — given annually to the top collegiate basketball player in the nation.

As a two-sport star, Ainge was drafted by both the Toronto Blue Jays for baseball and the Boston Celtics (31st pick) for basketball. After playing four seasons with the Blue Jays, he chose to pursue an NBA career. Ainge was a member of the Celtics’ 1984 and 1986 Championship teams and played in six NBA finals with three different teams (Boston, Portland and Phoenix). He also played for the Sacramento Kings. He became only the third player in NBA history to make 1,000 three-point field goals, finishing his 14-year career with 1,002.

Ainge played in 193 NBA playoff games, which was second all-time (Kareem Abdul-Jabbar, 237) when he retired. He is currently tied for seventh all-time with Karl Malone and ahead of Magic Johnson, Robert Parrish, John Havlicek and Bill Russell to name a few.

After retiring in 1995, Ainge was an NBA basketball television analyst for Turner Broadcasting for one year before the Phoenix Suns brought him back to the organization as an assistant head coach. Just eight games into the season, he was promoted to head coach and guided his club to a 40-34 record after the team started the season 0-8. He spent the next two-plus seasons as head coach of the Suns and compiled a 136-90 (.602) record before stepping down on December 13, 1999. He then returned for three more seasons with Turner Broadcasting before returning to the Boston Celtics in May 2003 as the Executive Director of Basketball Operations. He was named the 2008 NBA Executive of the Year following the Celtics’ Championship season.

His son Austin played on the BYUÃ¢â‚¬Ë†basketball team from 2003-07 and another son Cooper is a freshman on the 2012-13 squad. Ainge was inducted into the GTE Academic All-America Hall of Fame in May 2000 and honored with the prestigious NCAA Silver Anniversary Award in January 2006.

With a capacity crowd of 22,702 on hand, Danny Ainge was honored on March 8, 2003, by being the first-ever BYU basketball player to have his jersey retired in the 100-year history of the program. His No. 22 jersey will forever hang from the rafters of the Marriott Center.

“It’s just a great honor,” Ainge said. “BYU was the greatest time of my life. It’s just great to be a part of BYU basketball. I don’t know why mine is the first to go up. There were a lot of great players before me. Hopefully this is just the start.”

Then-BYU president Merrill J. Bateman said, “The standard has been set very high. We hope there will be more.” Ainge’s jersey, not his number, was retired, which means future players may still have the option to wear No. 22.

The ceremony, which took place during halftime of BYU’s game against Colorado State, started with a video clip of Ainge’s famous coast-to-coast, last-second basket to beat Notre Dame in the 1981 NCAA Tournament. Then-men’s athletics director Val Hale shared some of Ainge’s accomplishments, which include being named college basketball player of the year in 1981, playing professional baseball with the Toronto Blue Jays and winning two basketball championships with the Boston Celtics. 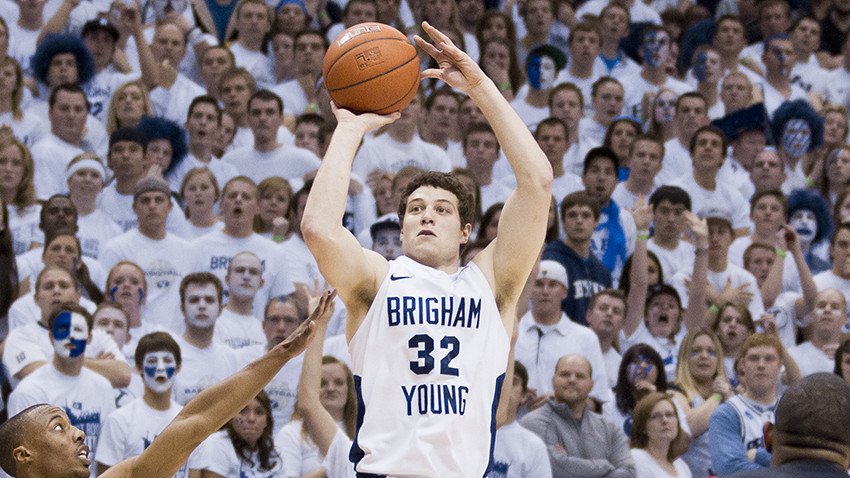 Jimmer Fredette took BYU and college basketball by storm his senior year, as his name became a verb, a noun and an adjective. Known as ‘The Jimmer’, the one-name star capped his record-setting career by earning national player of the year honors and leading the Cougars to the Sweet 16 for the first time since 1981.

The Glens Falls, N.Y., native was the nation’s leading scorer at 28.9 points per game in 2010-11. The All-American became a fixture on ESPN’s SportsCenter and in national publications throughout the season as his point totals, deep threes and incredible shot-making ability captured the nation’s attention. The national media exposure included features in Sports Illustrated and USA Today, back-to-back Sports Illustrated Covers and appearing as a guest on SportsCenter, PTI and the CBS Final Four pregame show.

All the attention came as a result of Fredette’s stellar play on the court and humble demeanor in leading the Cougars to a program-record 32 victories, the Mountain West Conference regular season title and BYU’s first trip to the Sweet 16 since 1981. Some of his memorable performances along the way included 39 points at UNLV, 47 at Utah, 43 against No. 3 San Diego State at home and a BYU-record 52 points against New Mexico in the MWC Tournament.

Fredette concluded his career as BYU’s all-time leading scorer with 2,599 points. He also set the BYU single-season soring record with 1,068 points in 2010-11. His 28.9 points per game in 2010-11 are also a Cougar record and Fredette also rewrote nearly every MWC single-game, season and career scoring records.

In four years at BYU, Fredette helped the Cougars capture three MWC titles and advance to the NCAA Tournament four times. He also led BYU to its best four-year run in program history as the Cougars won 114 games.

Following his record-setting senior season, Fredette was drafted No. 10 in the 2011 NBA Draft by the Milwaukee Bucks and then traded to the Sacramento Kings.