Four Cougars score in double figures in loss to USC 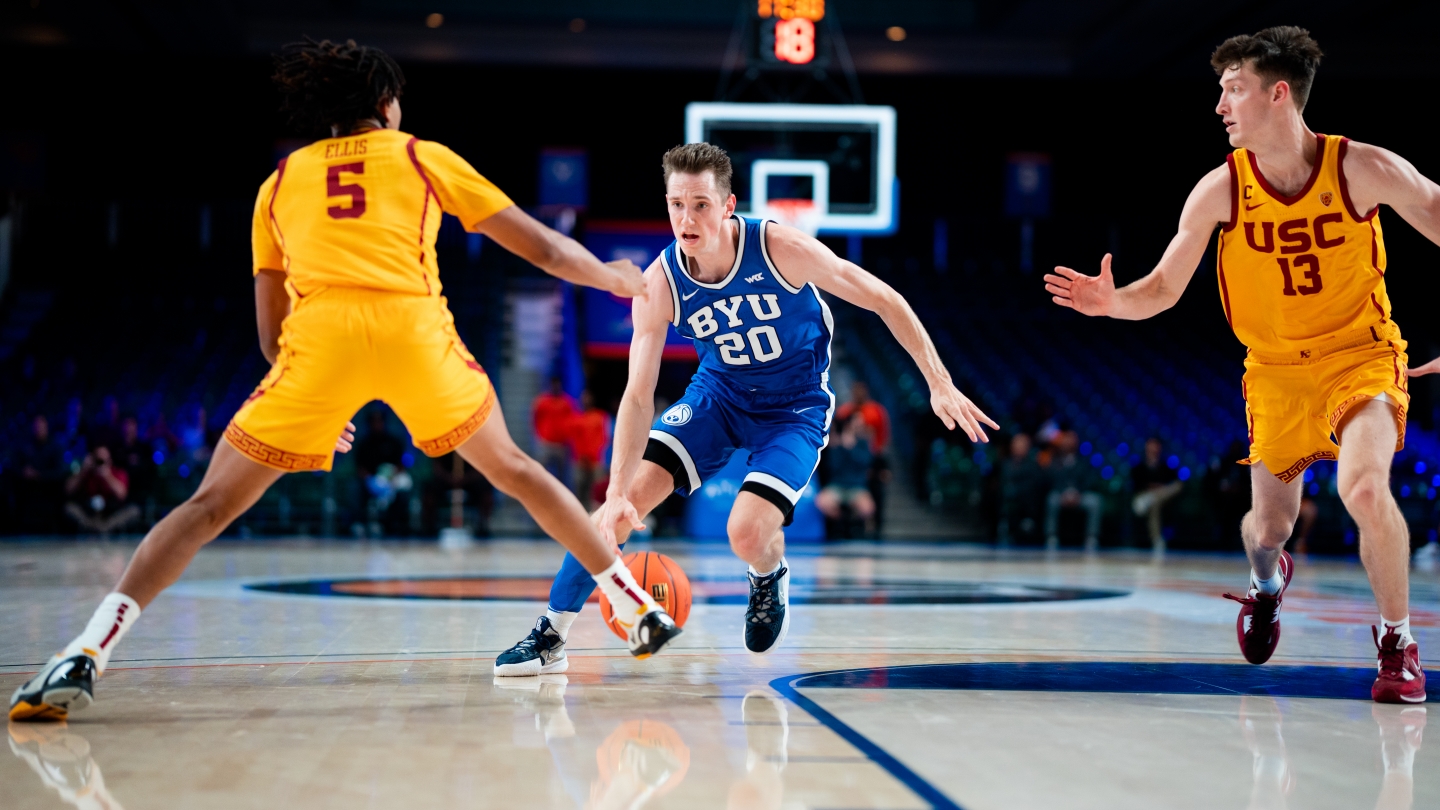 PARADISE ISLAND, Bahamas — Four Cougars finished in double figures as BYU fell to USC, 82-76, on Wednesday evening in the opening round of the Bad Boy Mowers Battle 4 Atlantis in Paradise Island, Bahamas.

“Congratulations to USC. They are a good team,” head coach Mark Pope said. “They are long and skilled. Boogie Ellis was absolutely terrific tonight, we just couldn’t find an answer for him. I am proud of our guys effort in the end, trying to hang in there. I know we are all disappointed by how we played today. We will play better tomorrow.”

BYU was led by Spencer Johnson who finished with a career high 18 points, on 5-of-10 shooting, and 6-of-7 from the charity stripe. The junior from American Fork also added four assists, two steals and a rebound in the six-point defeat.

Jaxson Robinson scored all of his 14 points in the second half' as the sophomore was 5-of-9 from the field and 4-of-8 from behind the arc while grabbing two boards, two assists, two blocks and a steal.

The Trojans took a 7-0 lead in the first two minutes as they started 3-of-4 from the field before Johnson scored seven-straight points to help the Cougars draw even with 16:16 left in the first half.

Johnson hit a 15-foot pull up jumper, a driving left hand scoop and a right wing three to open the scoring for the Cougars. Williams drove to the bucket and finished through contact to take a 9-7 lead on on the next possession.

Out of the under-16 timeout, Noah Waterman immediately made his presence felt by hitting a catch-and-shoot right-corner three to give BYU a 15-11 lead.

USC countered with a 9-0 run with Peterson contributing five of those points. Trey Stewart ended the Trojan run as Richie Saunders found Stewart on a cut down the lane for the scoop and score to cut the lead to three.

Waterman hit his second three of the game to draw within two before Williams grabbed a defensive rebound and went the length of the floor, finishing over the 6-9 Peterson to cut the Trojan lead to one with 4:00 to go in the period.

Johnson hit two free throws with 1:52 left in the half to cut the USC lead to one going into the break.

Just 10 seconds into the second half, Robinson retook a one-point lead for the Cougars with a driving floater from the right elbow. After four-straight USC points, Robinson hit a pull up three to knot the game a 35 with 18:07 to play. Fousseyni Traore ended the 4-0 Trojan run to again cut the lead to two with 15:52 to go.

George returned to the game and hit two threes and a driving layup to keep the Cougars within 13, but despite the BYU run, the Trojans made four of their next five to take a 72-57 lead with 4:09 to play.

Williams knocked down a three to cut the lead to 14 with 3:05 left before BYU’s full-court press forced a USC five second violation which led to a Robinson three to shave the lead down to 11 with 2:47 to go.

After a Cougar defensive stop, Robinson hit a second-straight triple to draw within eight with 1:38 to play. With 34 ticks left, two George free throws cut the Trojan lead to eight and on the inbound the Cougars tied up Boogie Elise to regain possession.

The foul game ensued which brought the Cougars as close as six, but the Trojans came out on top 82-76.

Wednesday’s contest will be broadcast on ESPN2. Greg Wrubell and Mark Durrant will also be on the call on the BYU Sports Network on BYU Radio Sirius XM 143 and KSL 102.7/1160 AM.