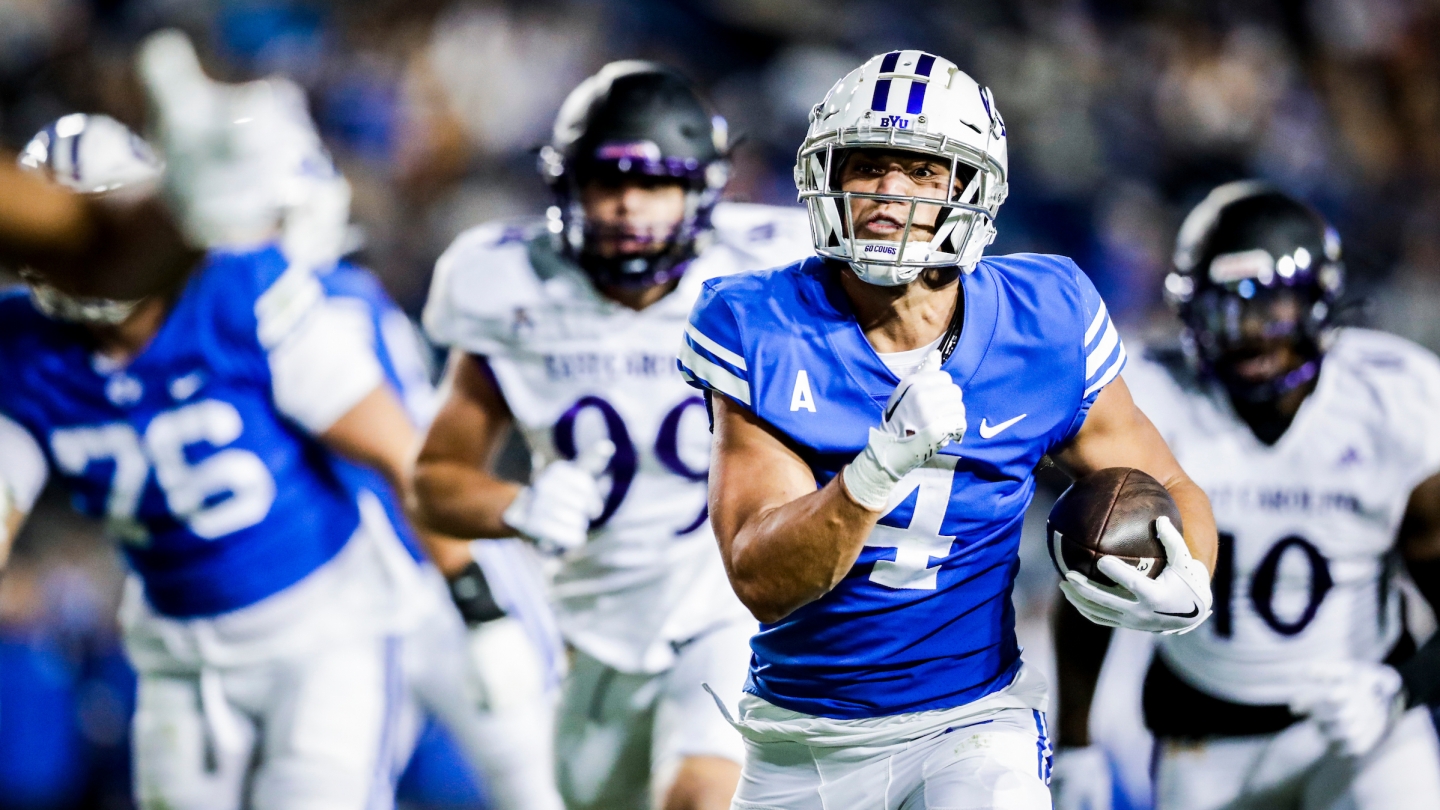 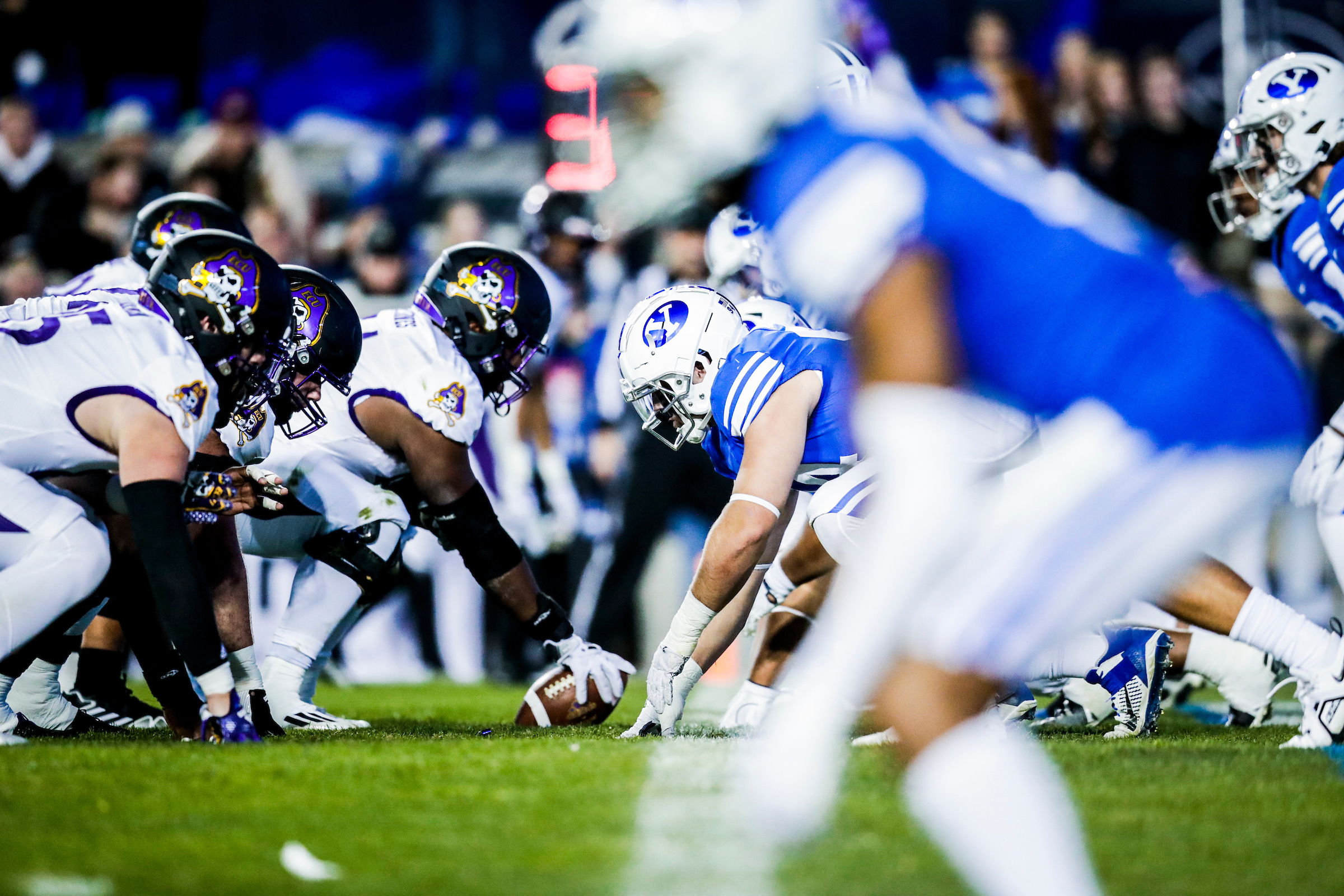 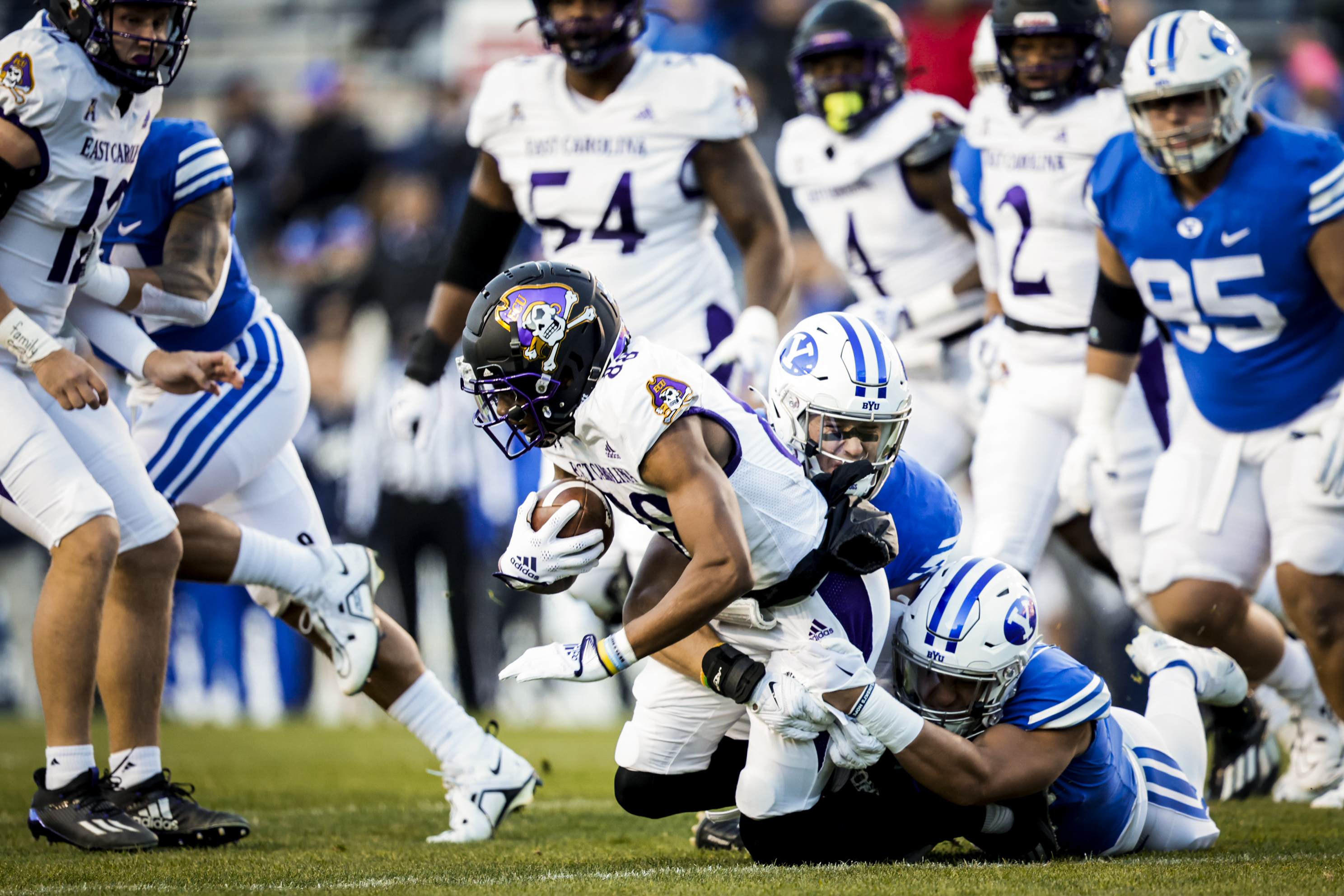 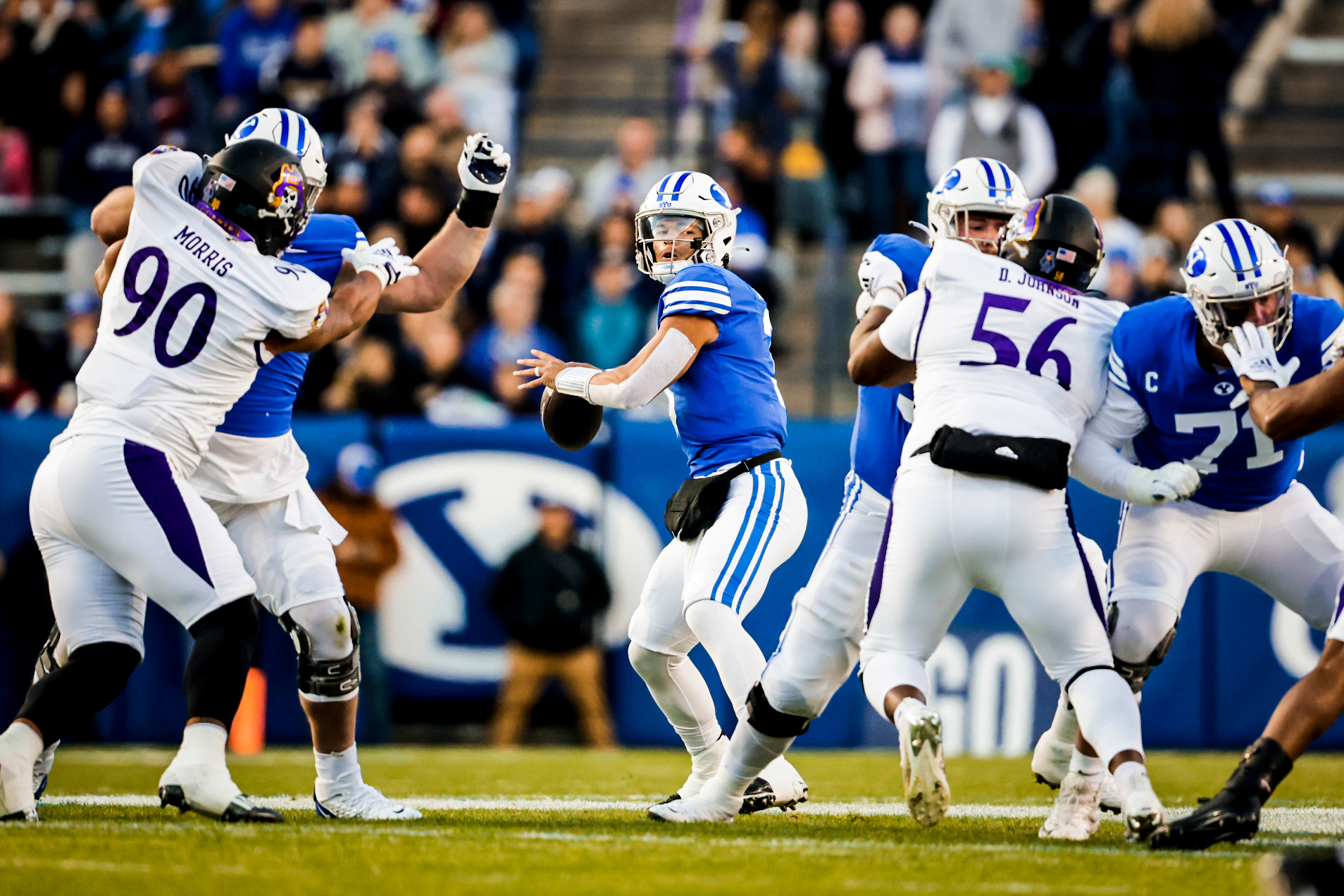 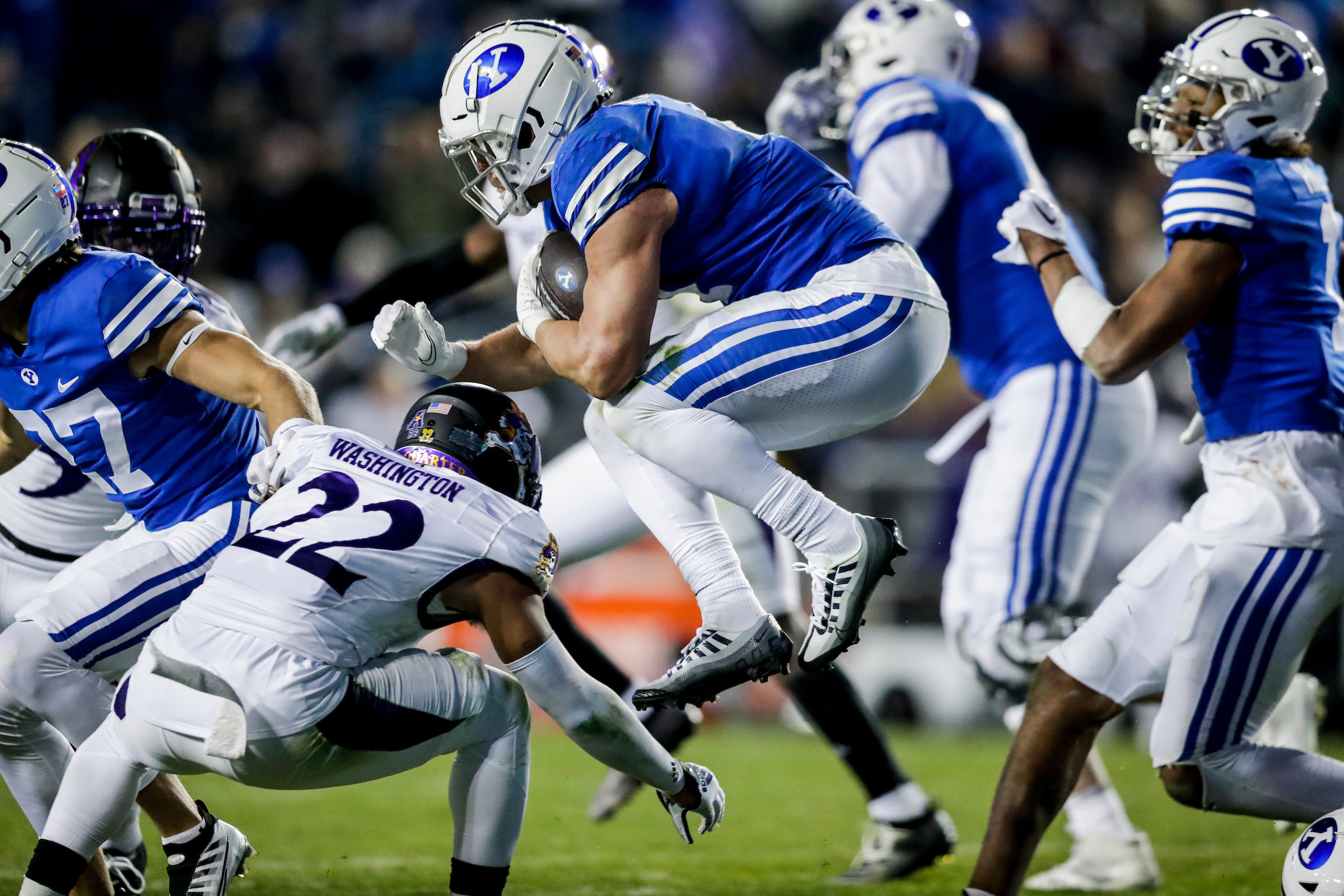 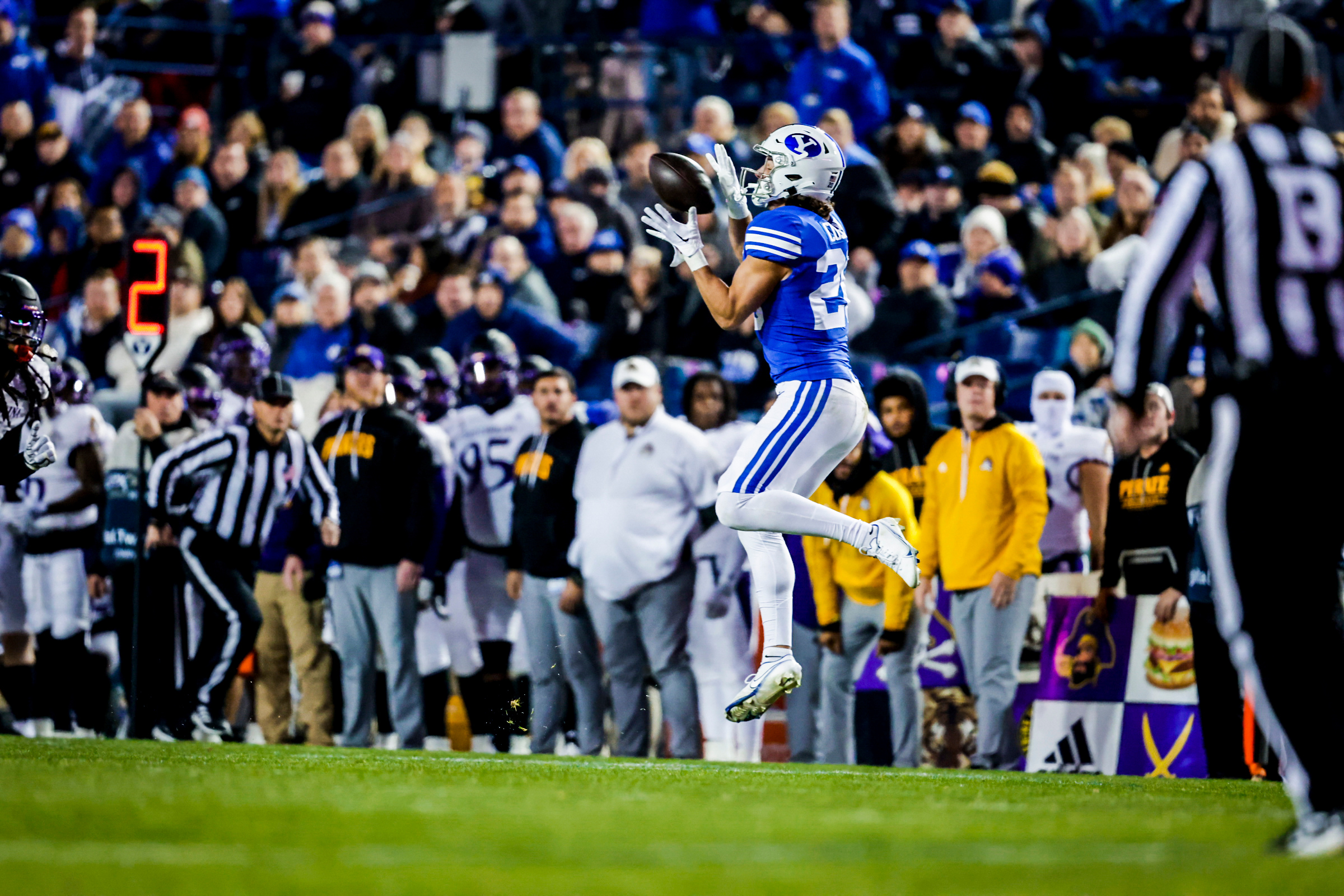 Tied at 24-24 from the 7:07 mark in the third quarter on, the back-and-forth game saw three ties and six lead changes, with the final lead change coming as the final second ticked off the clock and the Pirates converted the game-winning field goal from 33 yards out.

The Cougars possessed the ball for 33:56 to East Carolina’s 26:04 but were out-gained on offense by the Pirates, 424 to 388. Quarterback Jaren Hall finished 18-of-25 for 144 yards and two touchdowns, also carrying the ball eight times for 60 yards.

First Quarter
After forcing a three-and-out on ECU’s opening possession, the Cougars saw their first drive extended by a pass interference penalty. BYU took a 3-0 lead on a 36-yard Jake Oldroyd field goal with 8:23 remaining in the first quarter.

Quickly going 75 yards in six plays, the Pirates then took a 7-3 lead on a 31-yard rushing touchdown by Keaton Mitchell with 6:29 to go.

The two teams traded empty possessions before the Cougars gained first downs on a Nacua screen pass, Miles Davis carry and an East Carolina offside penalty on their next drive.

Second Quarter
Katoa busted a 24-yard run to open the second, and then another 24-yarder to the house, aided by a downfield Keanu Hill block, putting BYU back in front, at 10-7, with 12:56 left in the quarter.

A big play helped the Pirates get down to the Cougar 4-yard line, but two Blake Mangelson tackles and a quarterback hurry by Atunaisa Mahe held ECU to a field goal, making it a 10-10 game with 9:15 remaining in the half.

Answering with a screen pass to Nacua and back-to-back first down runs by Jaren Hall, the Cougars scored on a sliding 30-yard touchdown catch by Nacua, again putting BYU ahead, this time 17-10, with 6:01 to go.

ECU’s Keaton broke outside for a 35-yard rush on the Pirates' ensuing possession, eventually setting up a 1-yard touchdown run by quarterback Holton Ahlers that tied the game at 17 with 2:42 left in the half.

Third Quarter
Starting the second half with the ball, the Cougars capped off an 11-play, 75-yard drive with a 2-yard touchdown pass to Chase Roberts to regain the lead, going ahead 24-17 with 9:58 remaining in the third.

East Carolina answered back, earning three first downs on consecutive plays, scoring on a 4-yard Ahlers rush to make it 24-all, at the 7:07 mark of the quarter.

BYU kept it almost exclusively on the ground on its next possession, picking up four of its five first downs through the run game but faced a 3rd-and-10 from the ECU 20-yard line as the third quarter came to a close.

Fourth Quarter
After an 8-yard completion from Hall to Hill, the Cougars went for it on 4th-and-2, but turned it over on downs.

The Pirates had picked up three first downs and were approaching the red zone before a Tyler Batty tackle for loss aided the BYU defense, forcing East Carolina into a 42-yard field goal attempt that went wide right and gave the Cougars the ball back at their own 25-yard line with 9:59 left in the game.

BYU picked up one first down but had a second negated by a holding call, eventually giving the Cougars a 4th-and-1. Hall was unable to pick up the first down on a sneak, turning the ball back over to the Pirates.

A targeting penalty on BYU quickly put ECU into the red zone. Facing 4th-and-1 from the Cougar 9-yard line, Keenan Pili and Pepe Tanuvasa teamed up to stop Keaton behind the line of scrimmage, returning the ball to BYU with 3:54 to go.

The Cougars went three-and-out, however, and Ryan Rehkow’s punt set up the Pirates at their own 38-yard line with 2:26 left. Picking up a pair of first downs, East Carolina went for it on 4th-and-8 from the BYU 37-yard line, converting on a pass-interference penalty by the Cougars.

ECU ran two rushing plays to set up a field goal with three seconds remaining. The Cougars called both of their remaining timeouts, but the Pirates’ kicker squeezed his 33-yarder through the uprights as time expired, giving East Carolina the 27-24 win.

The Cougars will head to Idaho next week to take on Boise State at Albertsons Stadium on Saturday, Nov. 5. The game will be televised on a FOX Sports network. Kickoff time and broadcast plans will be announced at a later date. Fans can also listen to live play-by-play on BYU Radio SiriusXM 143, BYURadio.org/BYU Radio App or KSL 102.7 FM/1160 AM. 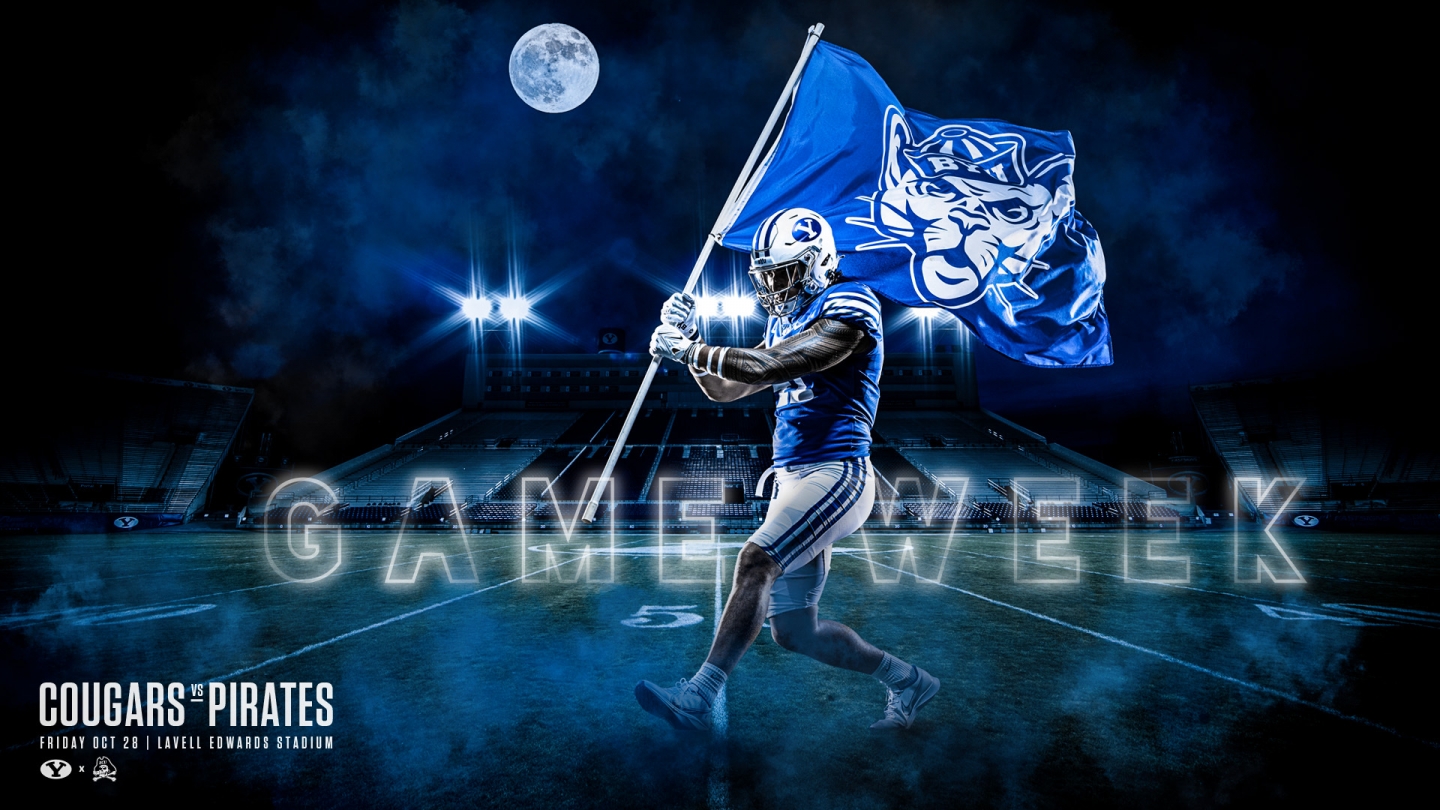 PROVO, Utah – BYU football will host the East Carolina Pirates on Friday, Oct. 28 at 6 p.m. MT at LaVell Edwards Stadium. The game will be televised on ESPN2.

Use this page as a one-stop shop for everything related to the game leading up to kickoff, including broadcast plans, news and game notes.

No Bag Policy
LaVell Edwards Stadium has adopted a NO bag policy, except for a few exceptions. Small clutch bags, no larger than 5” x 8” x 1”, with or without a handle or strap can be taken into the stadium. Medically-necessary bags will be permitted after inspection. One bag per person. No outside Food or drink will be permitted.

To see all stadium policies, go to the LaVell Edwards Stadium venue page.

UTA Transit Information
Enjoy the convenience and reliability of UVX and FrontRunner to get you to and from the BYU vs. East Carolina football game this Friday You can ride UVX for FREE and there will be extra service provided before and after the game.  For the best service, please head directly to the stadium stations, or bus, or UVX (it’s FREE!) within 15 minutes following the game.