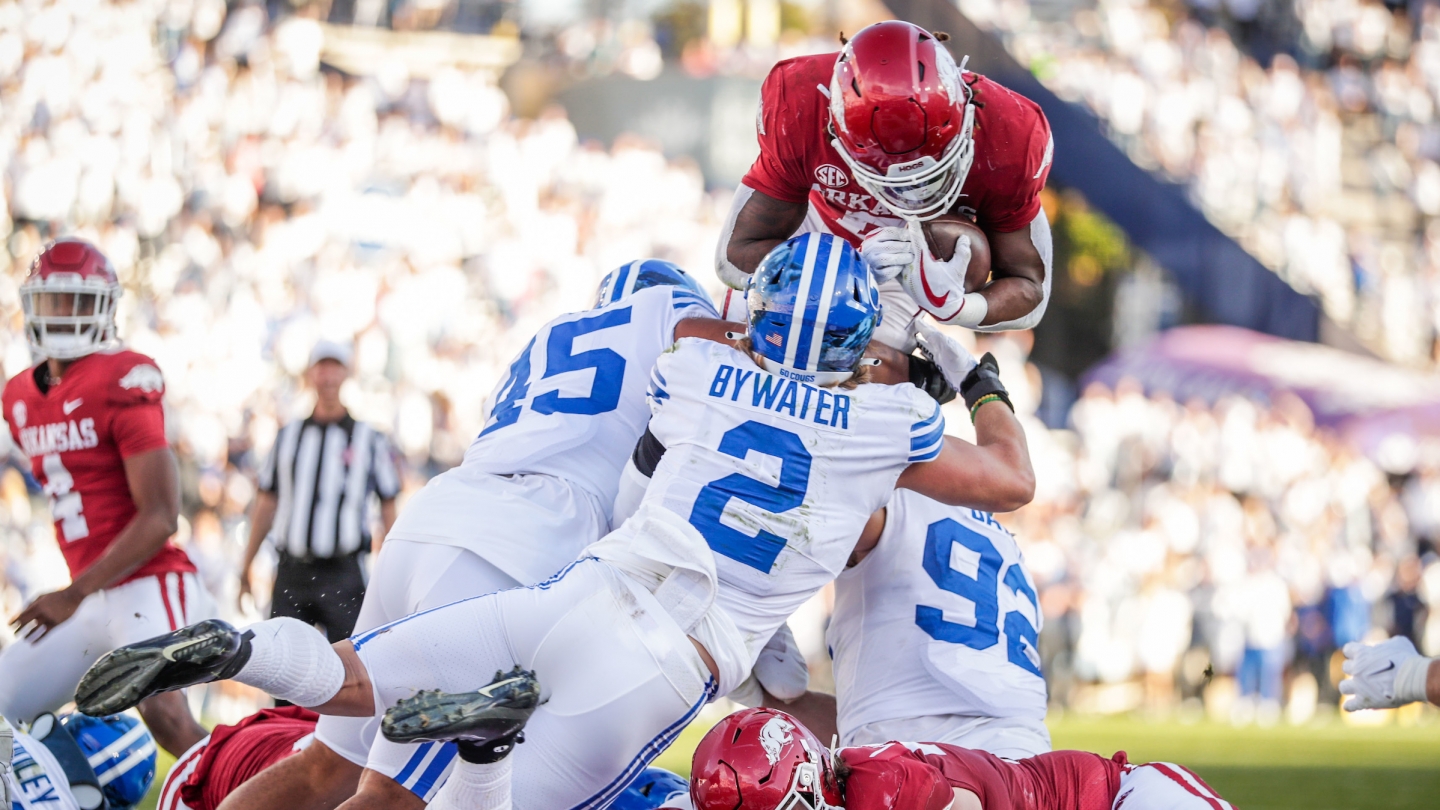 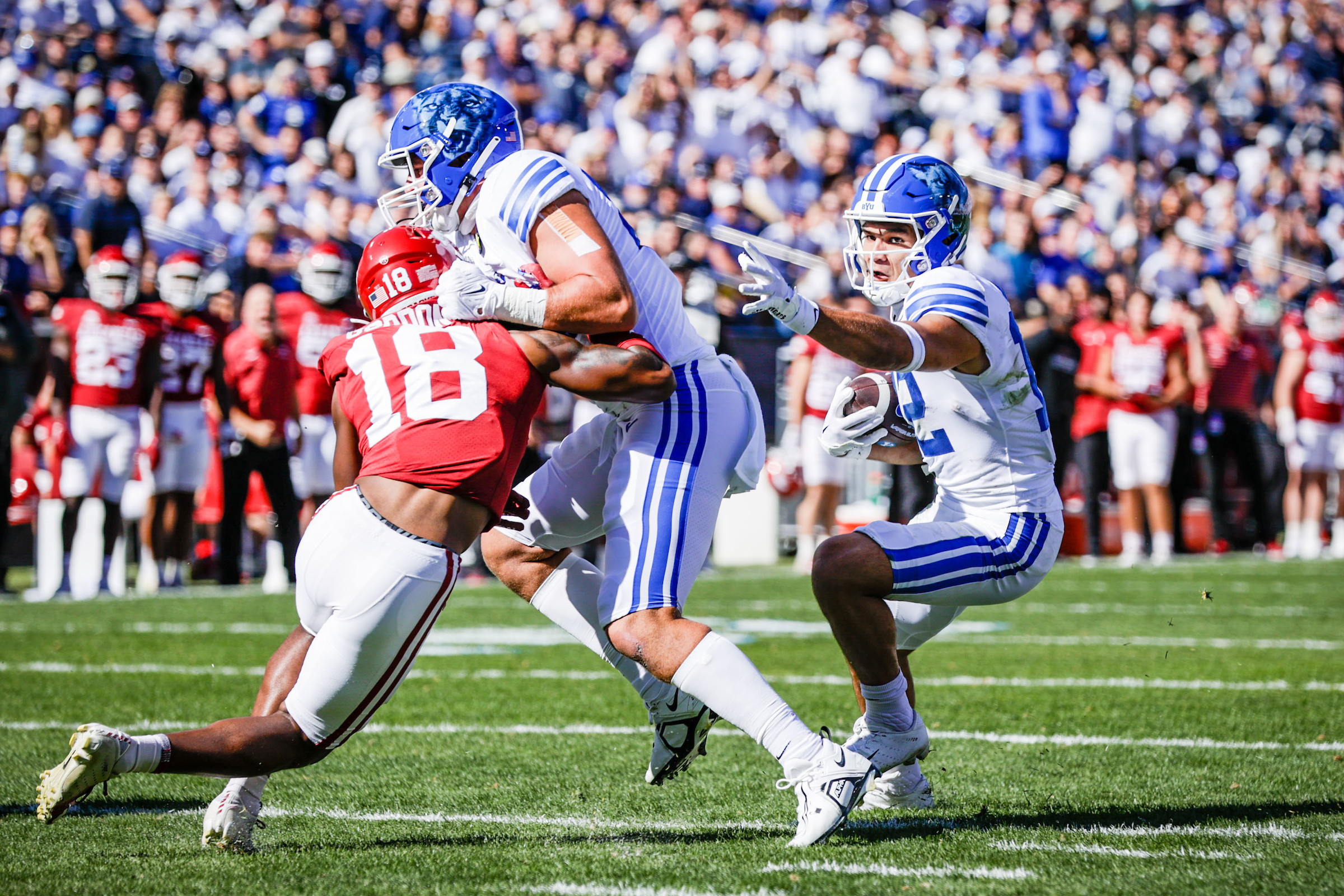 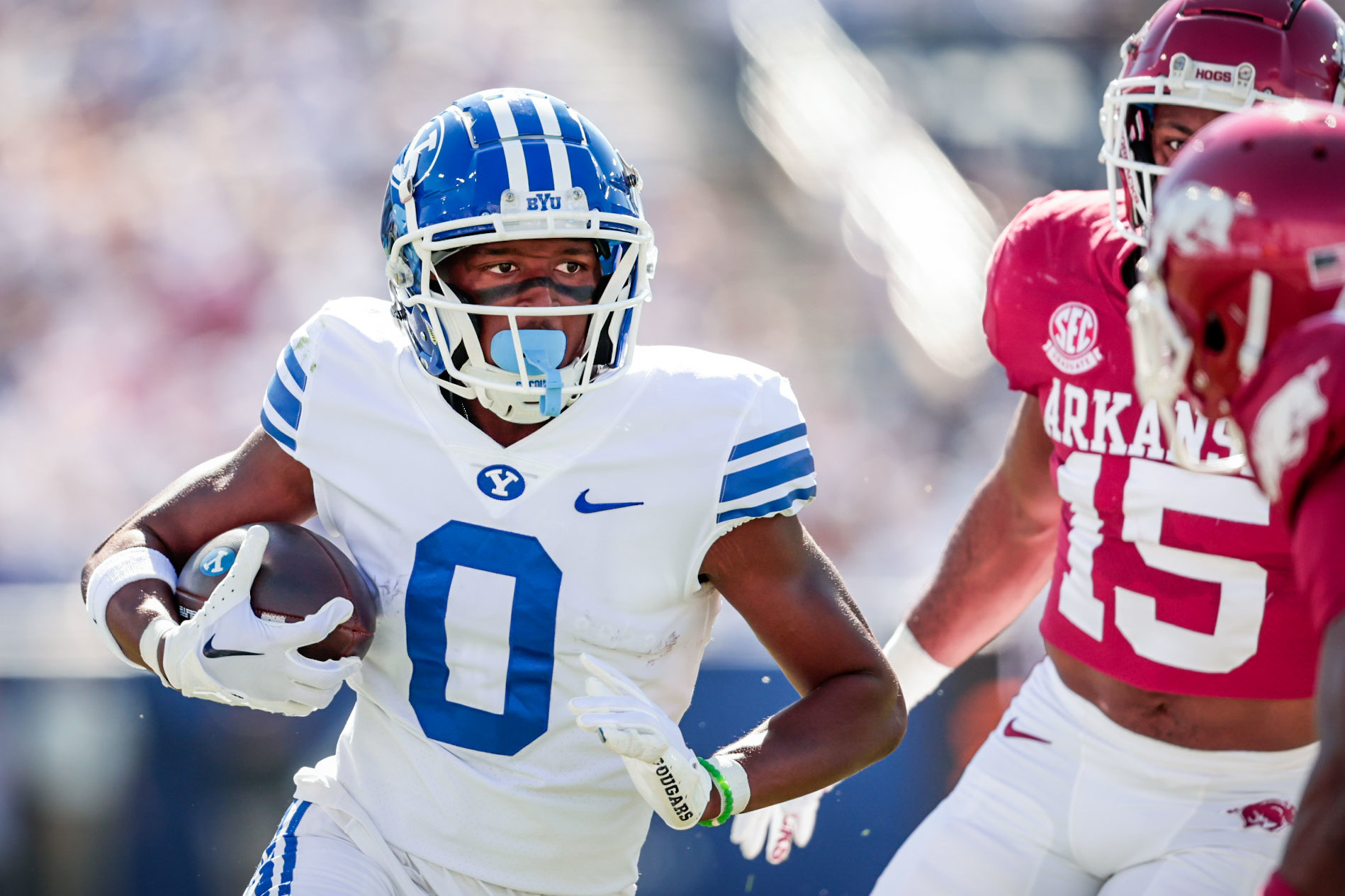 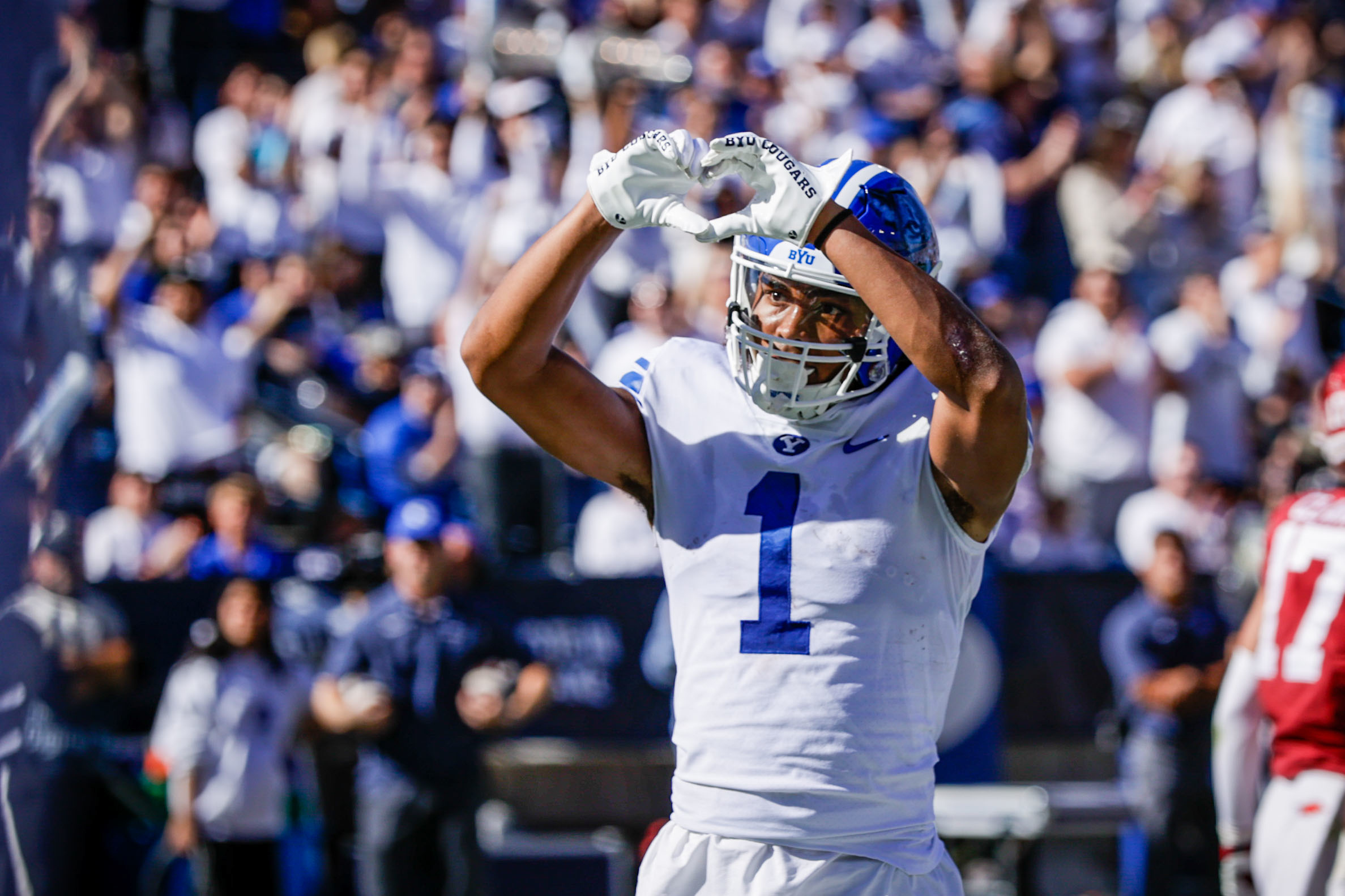 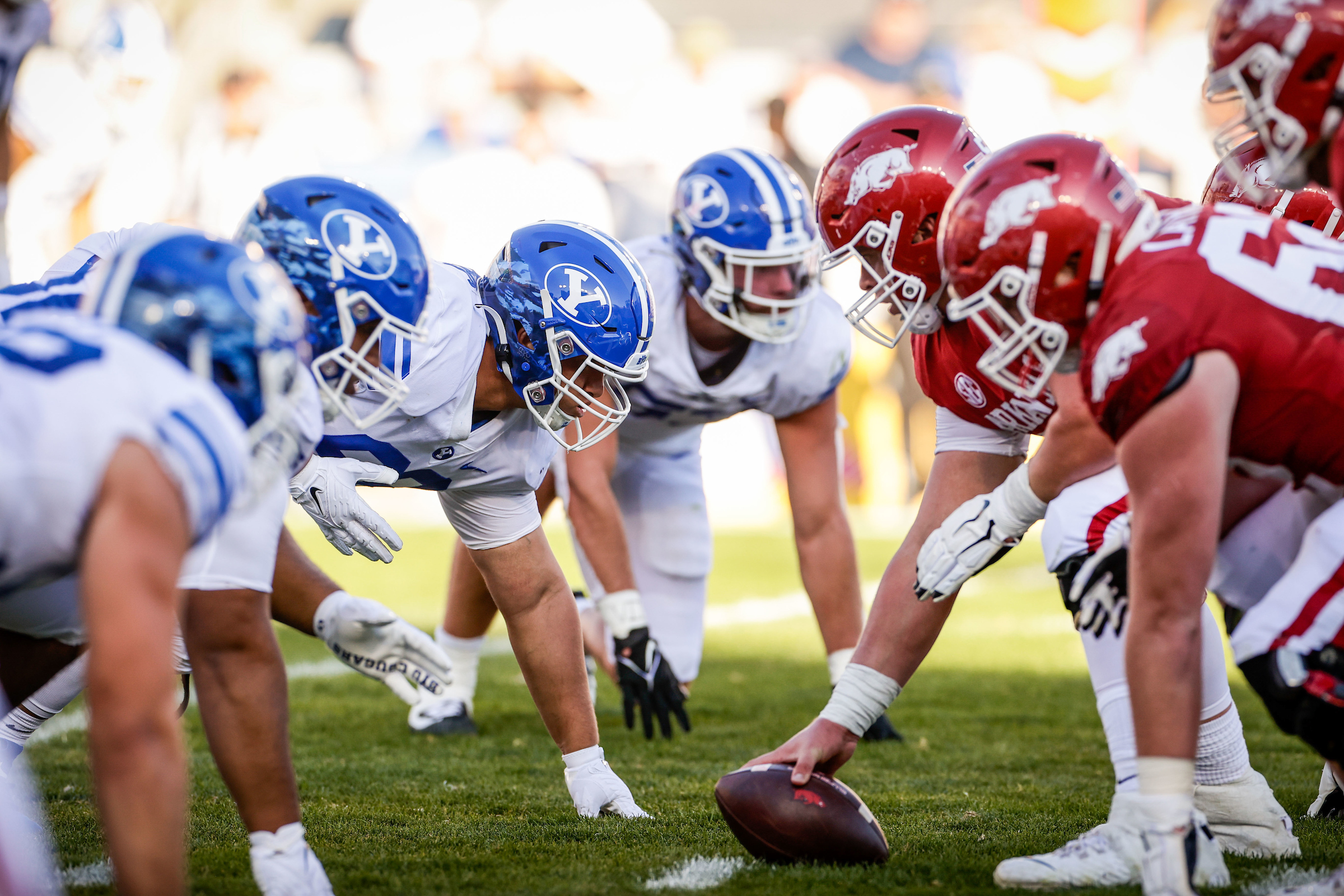 PROVO, Utah — A mixture of three turnovers on offense, missed tackles and chunk plays allowed on defense kept BYU at bay as the Cougars fell 52-35 versus Arkansas Saturday afternoon at LaVell Edwards Stadium.

While BYU drew first blood with a touchdown pass from Jaren Hall to Isaac Rex, the first half turned into a back-and-forth affair before the Razorbacks eventually built a 31-21 halftime lead.

The Cougars would battle back in the third quarter, drawing within three twice at 31-28 and 38-35 before Arkansas scored two-straight knockout touchdowns to end the game.

Jaren Hall went 26-of-41 for 356 yards and three touchdowns, with one interception. Hall has thrown 17 touchdowns to three picks on the season.

For the first time this season, BYU posted two receivers with over 100 yards. Kody Epps led the Cougars in receptions with nine for 127 and a touchdown – his fifth-straight game with a scoring grab. Puka Nacua turned in his best receiving performance of the season as he led the team with 141 receiving yards on eight grabs and one touchdown. Keanu Hill complemented Epps and Nacua with four grabs for 61 yards.

The Cougar defense started the game off strong as Pili recovered a Razorback fumble, forced by Tooley, at midfield.

While the BYU offense was unable to convert the turnover into a score, a 44-yard punt from Ryan Rehkow pinned Arkansas at their own 1-yard line. A pass break-up from Ammon Hannemann and quarterback hurry from John Nelson forced an Arkansas punt and returned the ball to the Cougars at their own 18-yard line.

Hall and the offense went to the air from there and jump-started the drive with completions of 10 and 13 yards, to Epps and Hill, respectively. Nacua kept the drive alive on 4th and 8 and put BYU in scoring position as he hauled in an 18-yard pass from Hall, dragging his toes along the sideline in an NFL-worthy grab.

BYU finished the drive in the end zone as Hall found Rex out of the backfield on a 4-yard touchdown pass that put the Cougars up 7-0 with 5:39 left in the quarter.

While a Micah Harper pass break-up impeded the Razorback passing attack on the ensuing drive, Arkansas went to the ground and responded with a 15-yard touchdown run by running back Raheim Sanders. The Razorbacks had leveled the game at seven with 2:37 left in the first.

The Cougars’ passing attack made key plays as BYU struck back on its next drive. Nacua and Brayden Cosper drew back-to-back pass interference calls, gifting BYU 30 yards and setting up a 21-yard touchdown pass from Hall to Epps. After a missed PAT from Justen Smith, BYU led 13-7 at the 1:11 mark in the first quarter.

The Razorbacks took the lead with a 10-play, 75-yard touchdown drive to open the quarter. Jefferson capped-off the drive with a 6-yard quick pass to tight end Trey Knox.

BYU wasted no time in seizing the lead back as Hall piloted the offense down the field with a 10-yard completion to Cosper, followed shortly by a 37-yard strike to Epps. The freshman receiver from Los Angeles, California made the catch and proceeded to pinball off defenders as he put the Cougars deep into Arkansas territory. Nacua then found the end zone with a 5-yard touchdown run. Following a converted 2-point play on a pass from Hall to Hill, BYU led 21-14 with 9:48 in the half.

While the Razorbacks would drive back into BYU territory, key pass break-ups from Kaleb Hayes and Ethan Slade forced Arkansas to settle for a 34-yard field goal. With the made field goal, Arkansas came within four at 21-17 with 6:46 in the second.

A bad BYU snap on 4th down prematurely ended its following drive and gave the ball back to Arkansas at the Cougars’ own 29-yard line. Arkansas made quick work of scoring as Jefferson ended the drive with a 4-yard touchdown pass to Landers, giving the Razorbacks a 24-21 lead with 3:39 to go till half.

Arkansas would receive the ball yet again, following an interception thrown by Hall. Despite a 3rd and long from his own 42, Jefferson would wiggle his way out of BYU defenders and connect with Knox for a 36-yard completion. The chunk play set up a 15-yard touchdown strike from Jefferson to Rashod Dubinion. Following the score, Arkansas held a 31-21 lead at the half.

Brooks helped the Cougars establish a rushing attack during its first drive of the second half. Brooks’ four-straight carries to begin the quarter included two first down pick-ups and jump-started a BYU scoring drive that was capped by a 3-yard touchdown carry from Nacua. With the score, the Cougars trimmed the Arkansas lead to 31-28 with 9:48 remaining in the third.

A costly facemask and pass interference penalty helped the Razorbacks score just 33-seconds later as Jefferson dropped-in a touchdown pass to Landers from 39 yards out.

Hall used his legs and arm to guide the Cougars on another responsive touchdown drive. The junior signal caller carried the ball for two first downs on the drive, along with an 11-yard completion to Hill. BYU came back within three as Hall found Nacua for a 33-yard touchdown pass with 5:11 left in the quarter.

Arkansas closed the quarter with a 45-35 lead after a 3-yard touchdown pass from Jefferson to Landers. The score was set up by a 30-yard pass a few plays previous.

A stalled BYU drive and Nacua fumble prevented the BYU comeback in the fourth. The Razorbacks scored the lone touchdown of the quarter, putting the game out of BYU’s reach at 52-35 with a 64-yard scamper by Sanders.

BYU (4-3) turns around to take-on fellow Independent Liberty at Arthur L. Williams Stadium in Lynchburg, Virginia at 3:30 p.m. EDT on Oct. 22. Watch the Cougars and the Flames on ESPN2 or ESPNU or listen live on BYU Radio Sirius XM 143, BYURadio.org/BYU Radio App or KSL 102.7 FM/1160 AM. 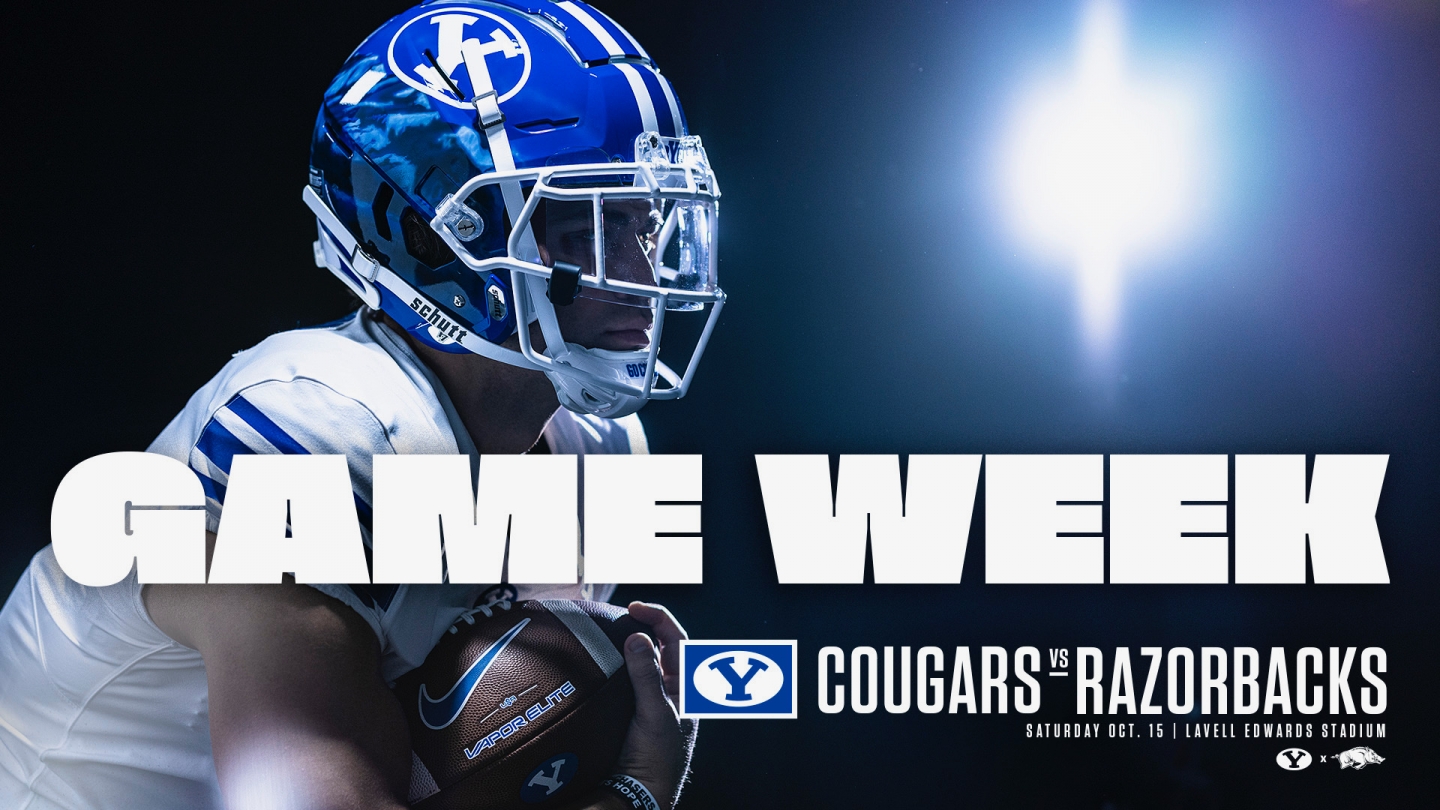 PROVO, Utah – BYU will host the Arkansas Razorbacks at LaVell Edwards Stadium on Saturday, Oct. 15 at 1:30 p.m. MT in the annual Homecoming game. The game will be televised on ESPN.

Use this page as a one-stop shop for everything related to the game leading up to kickoff, including broadcast plans, news and game notes. See below for additional information about Homecoming activities.

HOMECOMING WEEK
See a schedule of athletics related events below. For details on all of BYU's Homecoming activities on campus, visit homecoming.byu.edu.

No Bag Policy
LaVell Edwards Stadium has adopted a NO bag policy, except for a few exceptions. Small clutch bags, no larger than 5” x 8” x 1”, with or without a handle or strap can be taken into the stadium. Medically-necessary bags will be permitted after inspection. One bag per person. No outside Food or drink will be permitted.

To see all stadium policies, go to the LaVell Edwards Stadium venue page.

UTA Transit Information
Enjoy the convenience and reliability of UVX and FrontRunner to get you to and from the BYU vs. Arkansas football game this Saturday You can ride UVX for FREE and there will be extra service provided before and after the game.  For the best service, please head directly to the stadium stations, or bus, or UVX (it’s FREE!) within 15 minutes following the game.