“My teammates bring so much energy and fight," Livingston said. "It was so fun to look them in the eyes and see their confidence in me and themselves. I just fed off of that and their energy. We talked about starting strong in practice this week and the focus from that contributed to tonight."

As a team, BYU finished the match with 46 kills on a .416 hitting percentage. Livingston hit .514, with outside hitter Sophia Callahan and middle blocker Whitney Llarenas each adding six kills. Callahan’s mark was a new season-high, while Llarenas’ came on a .625 hitting clip.

Set One
Livingston led the way to open set one, registering six kills in nine points to put BYU ahead 7-2. From there, four different Cougars combined for five more kills, giving BYU a 15-6 lead at the media timeout.

The strong hitting clip continued throughout the set, with the Cougars finishing set one with 16 kills on a .609 percentage. Livingston had four more kills, including three straight to see the BYU lead at 19-7. She then teamed up with Llarenas for two blocks, which were sandwiched around her 10th and final block of the set.

Llarenas powered the Cougars the rest of the way, earning back-to-back blocks with Callahan before delivering the set point with a kill of her own. The 25-10 set one victory saw BYU hold Gonzaga to just six kills on a .037 hitting percentage. Livingston’s .833 clip in the set was her highest in a single set this season.

Set Two
The Cougars continued their strong offense in the second set, using 4-0 and 7-0 runs to open up a 12-2 lead. During the run, Livingston had three kills and a block with Heather Gneiting, who added a kill of her own. Llarenas had two kills and Taylor registered an ace during the stretch.

Callahan had a strong second set, registering three kills with a perfect hitting percentage in the frame. Two of Callahan’s kills in set two were back-to-back, giving BYU a 21-12 lead.

The double-digit margin the Cougars opened early stayed intact throughout the set, which finished 25-14. Following her consecutive kills, Callahan’s defense was on display to close the frame, as she and Gneiting teamed up for two-straight blocks on BYU’s final two points.

Set Three
The Bulldogs kept set three closer than the previous two, taking the lead at multiple points. Gonzaga led 15-12 before four different Cougars combined to tie the set at 16. Llarenas, Elyse Stowell and Callahan each had a kill, with Livingston adding an ace.

From there, the teams traded points until the set was at 19-all. The Cougars then went ahead for good when Livingston registered her career-high 21st kill in the match. She added one more down the stretch, her eighth of the set, with GU’s four attack errors giving BYU a four-point margin to work with for match point. A kill from Llarenas then gave the Cougars the match and set win, 25-21.

BYU remains at home this Saturday, Oct. 29, at 1:00 p.m. MDT against Portland. The match can be viewed live at the Smith Fieldhouse or on BYUtv and the BYUtv app.

No. 17 BYU hosts Gonzaga on Thursday 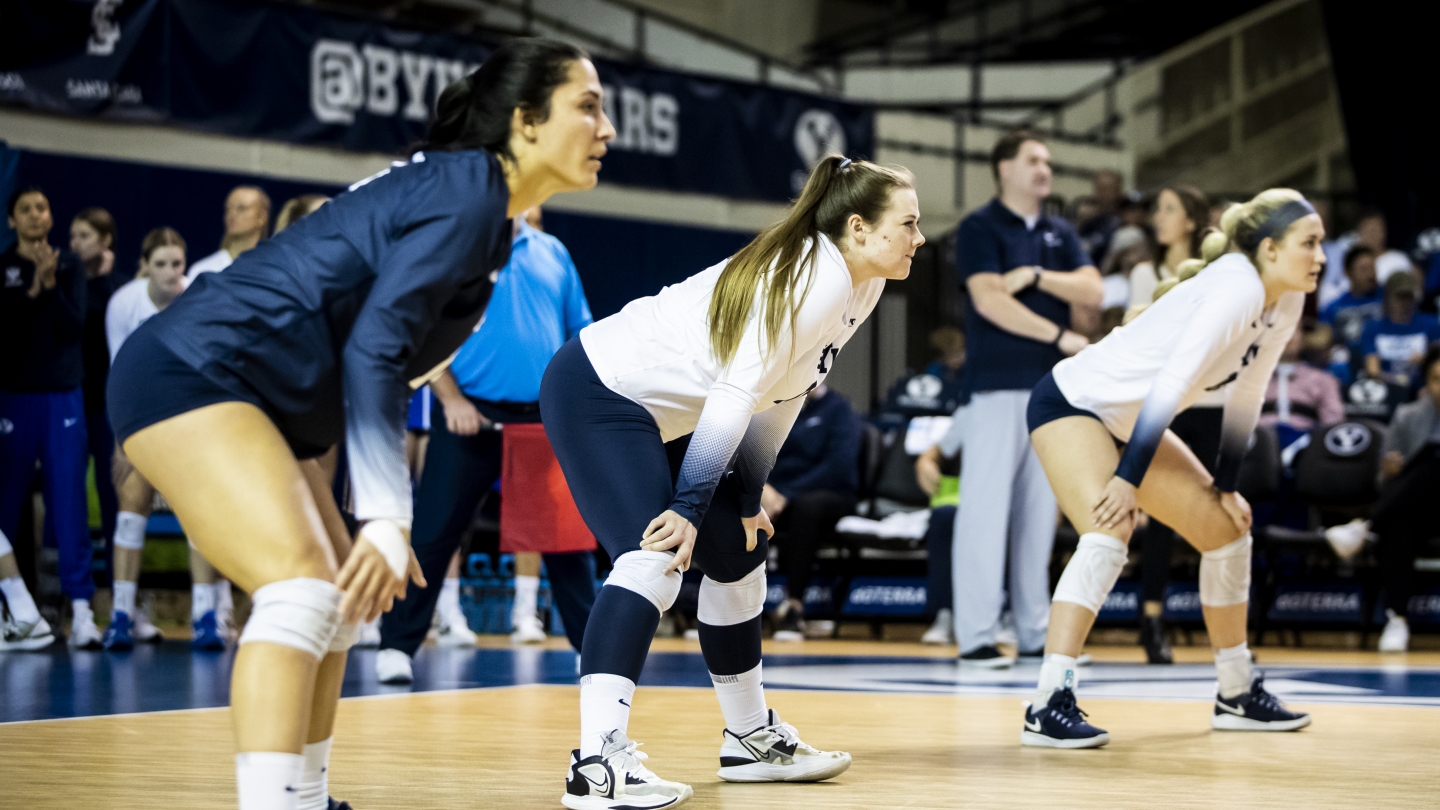 PROVO, Utah — After two weeks away, No. 17 BYU women’s volleyball returns to the Smith Fieldhouse this week, hosting Gonzaga in a WCC matchup on Thursday night.

The Cougars (14-5, 7-2 WCC) remained at No. 17 in this week's American Volleyball Coaches Association (AVCA) poll following their 3-0 loss at No. 4 San Diego last week. Dating back to the final poll of the 2013 season, BYU have been ranked in the top-17 for 136-consecutive polls.

Looking to bounce back from two-straight losses in conference play, the Cougars have posted a 10-1 record at home this season, and are also winners of 25-consecutive WCC matches in the Smith Fieldhouse. BYU head coach Heather Olmstead is 110-6 in Provo during her tenure.

The Cougars and Zags met earlier this season in Spokane, with BYU winning in four sets. Olmstead-led teams have never lost to Gonzaga, with an 8-0 record in Provo and 7-0 record at the Charlotte Y. Martin Centre.

Hitting .298 on the season, the Cougars rank fifth nationally in team hitting percentage. They're also No. 29 in assists per set, at 12.82, and No. 33 in in kills per set, at 13.8. All three statistical marks continue to lead WCC.

Gneiting paces BYU at the net with 81 total blocks on the year. With two solo blocks at San Diego last week, the Pleasant Grove, Utah native reached 50 career solo blocks, tied for second at BYU in the rally scoring era.

Following their matchup with the Zags, the Cougars will welcome Portland to town, hosting the Pilots at the Smith Fieldhouse. The match will be televised on BYUtv and streamed on the BYUtv app.