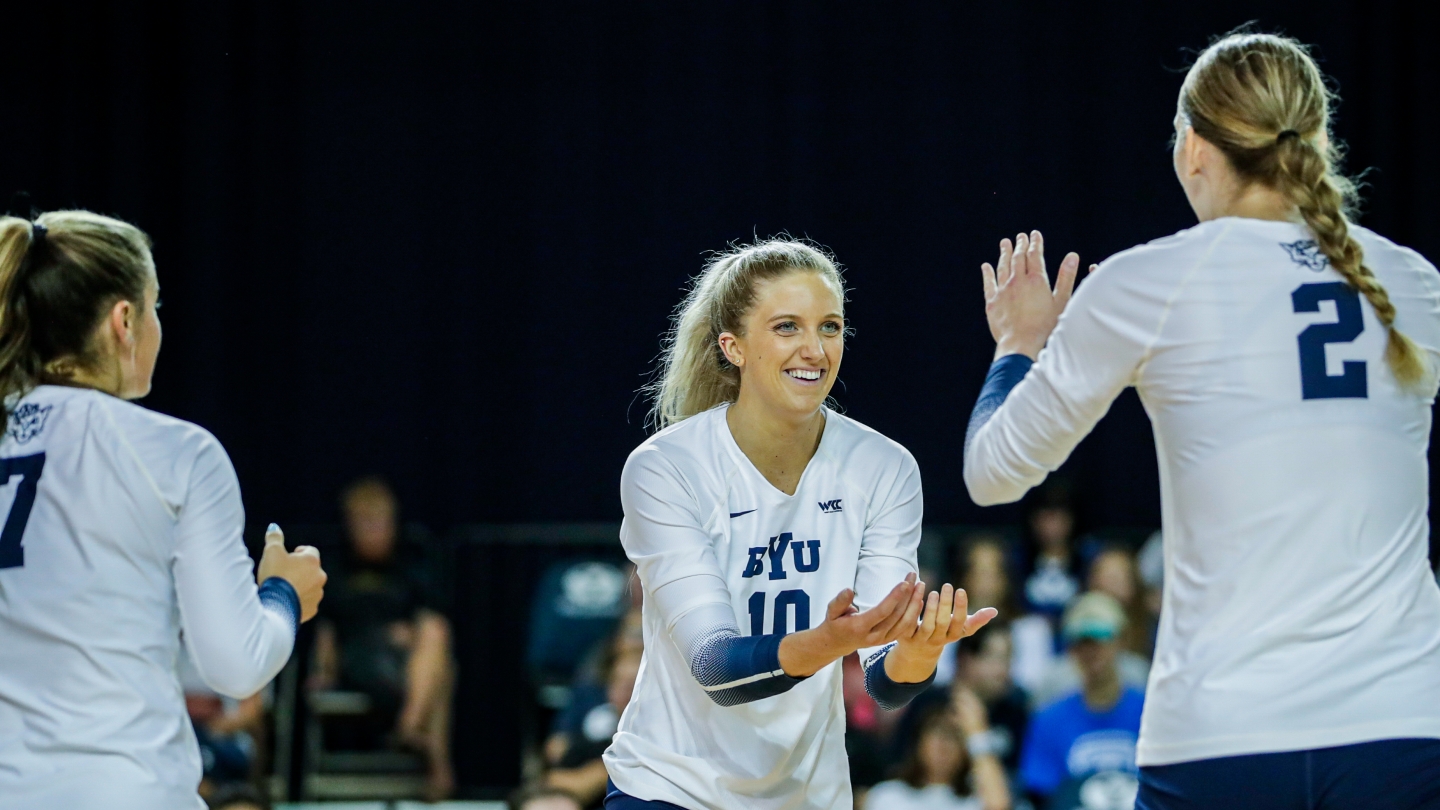 “We were super focused and dialed in today,” BYU head coach Heather Olmstead said. “Whitney [Llarenas] had a great match. Offensively, she made some good decisions with good distribution. She got the ball to our middles when she needed to and it all started with good passing.”

The Cougars (13-3, 6-0 WCC) led an efficient attack, registering a .506 hitting percentage on the contest for the team’s highest clip of the season. San Francisco was held to a .236 hitting percentage, while BYU recorded five service aces.

Erin Livingston and Whitney Llarenas led the team in kills with 10 and nine, respectively. Livingston also tallied 20 swings on a .450 clip to go along with four digs and one service ace. Llarenas totaled 13 attacks on a .615 hitting percentage along with eight total blocks.

“It all comes down to focus,” BYU middle blocker Llarenas said. “I felt we did a great job focusing on cues, strengths, and being mentally there. I felt like we brought great energy today to perform and build our skills.”

Set 1
Two errors by the Dons and a slam by Llarenas put BYU up 3-1 early. A San Francisco kill would bring the score to 3-2 before a Dons service error was followed by another Llarenas kill.

Both teams would trade points before back-to-back assists from Whitney Bower to Stowell and Livingston put the Cougars up 8-4. The Dons went on a run of their own to cut the lead to 8-7 before the Cougars would score four consecutive points behind another kill from Stowell and three put-aways by Livingston.

With BYU holding a 12-7 lead, both teams would split the next ten points, highlighted by a block assist from Llarenas and Livingston along with two put-aways by Llarenas and one kill from Livingston as the Cougars went up 17-12.

With the score at 19-15, BYU held a hitting percentage of .600 with 13 kills. Soon after, the Dons would card two kills, including a tip kill. Whitney Bower countered with a dump kill that landed near the left of the center line as the Cougars took a 22-18 advantage. At set point, Elyse Stowell placed a kill to claim a 25-20 BYU victory.

Set 2
Livingston hammered home three kills to go along with one from Gneiting as the Cougars took an early 4-2 lead. Gneiting would then card two consecutive aces to put the Cougars up 6-2 while tallying her 22nd ace of the season.

BYU continued its dominance, extending the advantage to 10-3 off a .538 clip on the set to that point. After two Bower assists to Grimmer and Llarenas for slams, Llarenas had carded seven kills on a .667 hitting percentage.

Llarenas and Grimmer registered block assists before Llarenas had another kill. Livingston would then follow up with her third service ace of the night to take a commanding 17-4 advantage. San Francisco responded with two aces of its own while claiming four of the next five points to cut the Cougar lead to 18-8.

A kill tip off a free ball by the Dons followed by another slam to the weak side lowered the Cougars’ advantage to 20-11. BYU would curb momentum with Whitney Bower’s eighth kill of the afternoon before Whitney Bower and Llarenas would combine forces for a block assist to go up 22-12.

With the score at 24-14, BYU would punctuate the second set victory with an ace from McComber. The Cougars capped off the efficient second set performance hitting at a .583 clip and 14 kills.

Set 3
A slide attack by Llarenas put the Cougars up 2-1 early in the set. Both teams would trade errors on the ensuing points as the score became knotted at five apiece.

Gneiting registered her fourth kill of the night and Livingston recorded her third block to reclaim an 8-7 lead. A marathon point ending in BYU’s favor after a block assist by Llarenas and Sophia Callahan kickstarted a 4-0 run for the Cougars. The run included two assists from Whitney Bower to up her assist total to 30.

With BYU up 16-12, two kills from Gneiting followed by a San Francisco error extended BYU’s lead to seven. Gneiting’s second block put BYU up 20-12. Eden Bower carded her fourth kill of the night to make it 22-14 before the Dons would score three of the next four points.

At match point and BYU up 24-17, McComber had a service ace to wrap up the contest as the Cougars claimed a 3-0 victory.

BYU will take the road to Moraga, California to take on Saint Mary's next week on Thursday, Oct. 13 at 7 p.m. PDT. The match will be streamed live on the WCC Network. 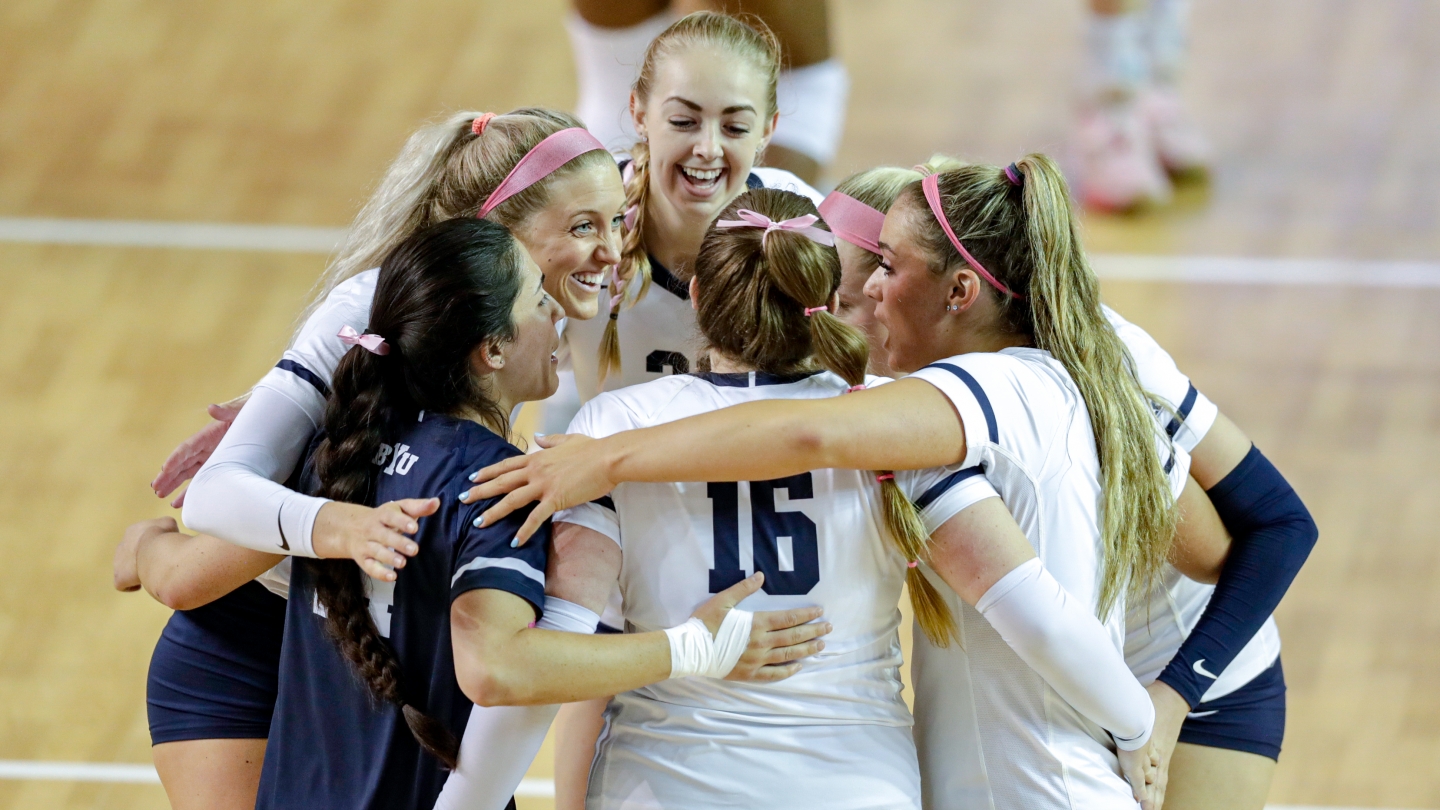 PROVO, Utah — Riding a season-high seven game win-streak and coming off a 3-0 sweep of Santa Clara on Thursday night, No. 14 BYU women's volleyball is set to play San Francisco in the Smith Fieldhouse on Saturday afternoon.

The Cougars have won 32-consecutive WCC matches, the third-longest streak in NCAA DI women's volleyball. Dating back to 2019, the Cougars have won 24-straight conference games at home. Under head coach Heather Olmstead, BYU is 115-9 in WCC play, with a perfect 14-0 record against San Francisco, including 6-0 in the Smith Fieldhouse.

The Cougars have swept three of the last four matchups with San Francisco, including both games last season and the first of two during the spring 2020-21 season. With Olmstead at the helm, BYU had dropped just three sets to the Dons in eight seasons.

Hitting a season-high .429 against Santa Clara on Thursday night, BYU's season hitting percentage improved to .292, moving the Cougars up to No. 12 nationally. BYU also ranks No. 11 in kills per set (14.04) and No. 13 in assists per set (13.02). All three statistical marks remain atop the WCC.

Outside hitter Erin Livingston surpassed the 200-kill mark against the Broncos. The Corona, Calif. native has downed 208 on the year and averages 4.08 kills per set, good for No. 35 nationally and second in conference.

Middle blockers Heather Gneiting and Whitney Llarenas each have 100+ kills to their name this season, with Gneiting at 133 and Llarenas at 116. The duo lead the team in total blocks with 61 and 45, respectively, Gneiting's 20 service aces are a team-high, and Llarenas' .387 clip stands at No. 31 in the country, while continue to rank first in the WCC

Setter Whitney Bower has dished out 531 assists this season and is averaging 10.41 assists per set, good for No. 37 nationwide and second in the conference. Four Cougars have recorded 100+ digs thus far. Bower continued to lead the team with 134, followed by Kate Grimmer and Kelsey Knudsen (123) and Aria McComber (116).

Hitting the road again after Saturday afternoon's match, BYU will head to Saint Mary's and Pacific for games against the Gaels and Tigers next week. Both matches will be streamed on the WCC Network.