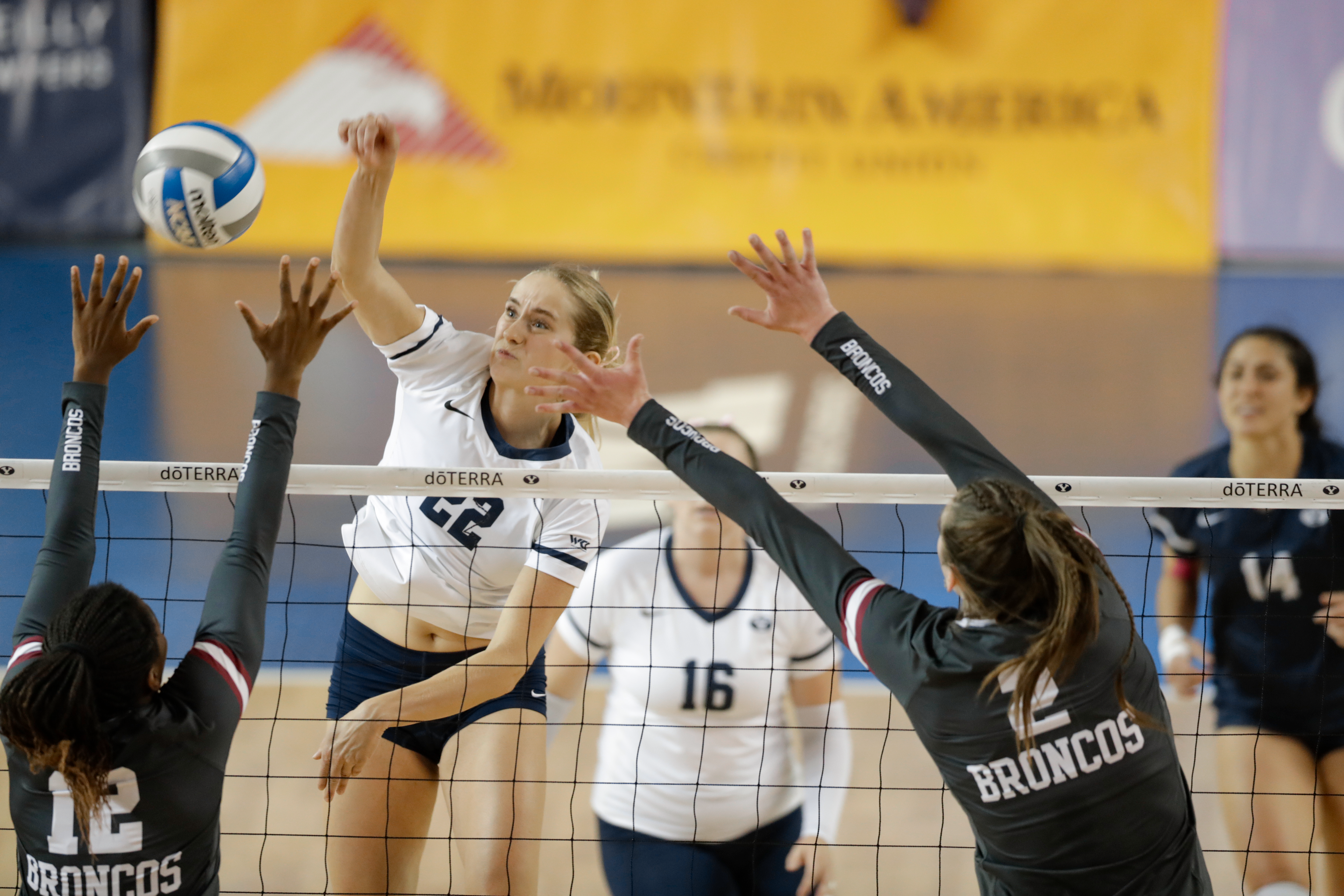 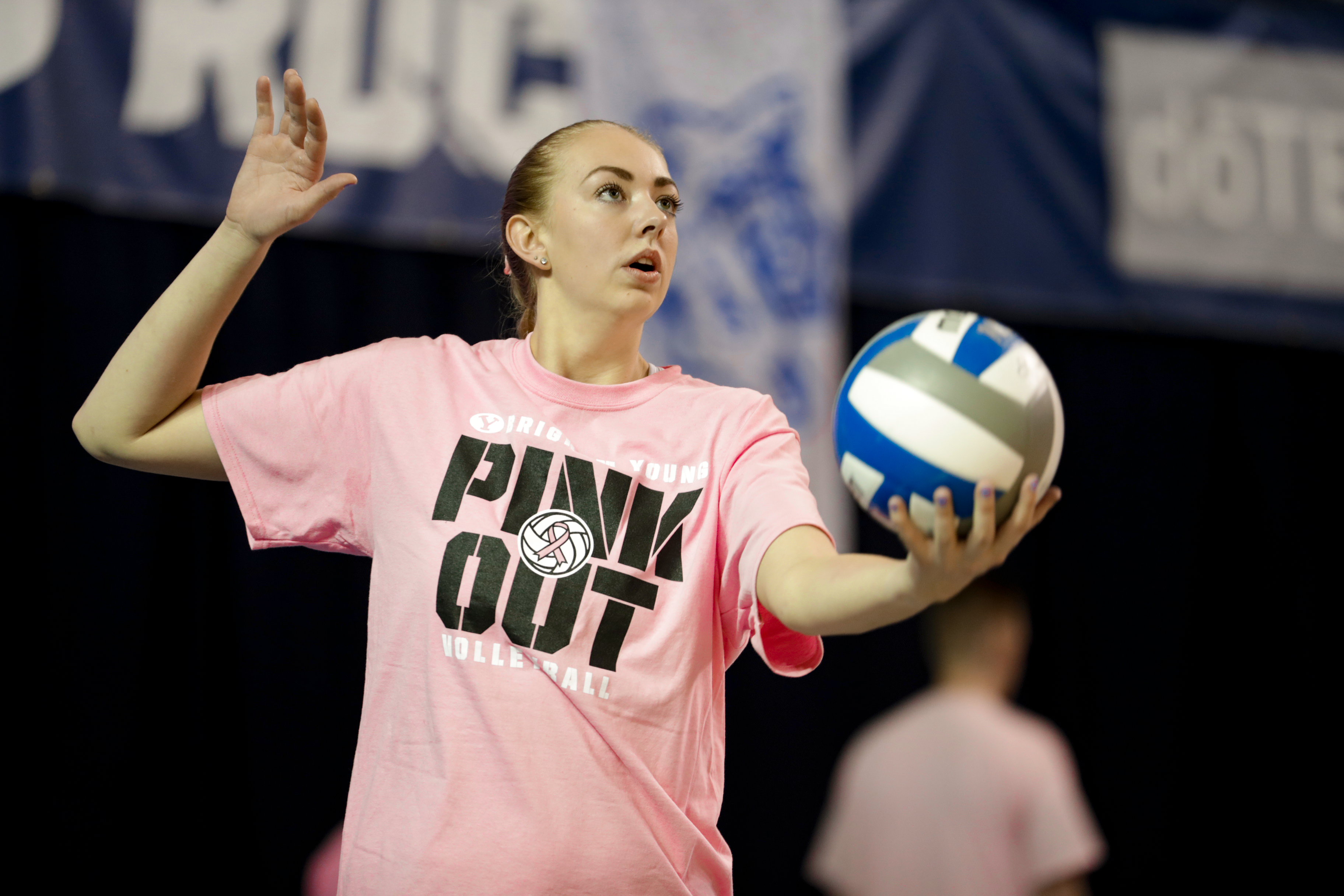 “We’ve got a great team,” BYU head coach Heather Olmstead said. “They came in focused today. I loved the energy in the gym and the support for breast cancer awareness. The girls wanted to play well and they did, so I’m proud of them.”

The matchup with the Broncos was a pink out game in support of Breast Cancer Awareness Month. Both teams wore pink shirts during warmups, with BYU players donning pink ribbons in the hair and on their shoes in honor of those fighting against cancer.

After going down 5-1 in the first set, the Cougars (12-3, 5-0 WCC) held the Broncos to just eight points during the remainder of set one to take the set 25-13. BYU took the momentum from the first set and carried it into the rest of the match. Hitting just .250 in set one, the Cougars rebounded by recording hitting percentages of .571 and .517 in the second and third sets. Their .438 clip set a season high for hitting percentage, besting the previous high of .405 against Rider on August 26th.

Erin Livingston led the Cougars with 16 kills on a .520 clip, her highest hitting percentage of the season. The junior outside hitter also added four digs and a service ace to cap off her night.

Along with Whitney Bower’s three aces, Alyssa Montoya added two of her own, with Livingston, Aria McComber and Kelsey Knudsen also recording aces to combine for eight on the night, tying a season high for the Cougars.

Set 1
The Cougars dropped the first three points of the match before getting on the board with the Broncos leading 3-1. After a Kate Grimmer kill, Santa Clara scored two-straight to stretch its early lead to 5-1.

After dropping five of the first six points, BYU took seven of the next ten points to tie the set at eight. Two kills from Heather Gneiting, three from Livingston and back-to-back kills from Elyse Stowell contributed to the 7-3 Cougar run.

A dump kill from Whitney Bower and a service ace from McComber gave BYU its first lead of the match, 10-9. After a Bronco kill, the Cougars rattled off three-straight to open up a 13-10 lead with a kill from Gneiting and back-to-back aces from Montoya. Knudsen recorded the fourth ace of the set for the Cougars to extend to the BYU lead to four.

Out of a Santa Clara timeout, the Cougars scored three-straight courtesy of a Livingston kill, a Whitney Bower service ace and a Bronco error to take a 20-13 lead which led to another SCU timeout.

BYU came back from the timeout and capped off a 9-0 run to close out the set with a kill from Livingston and two more service aces from Whitney Bower. The Cougars recorded 14 kills, 15 digs and seven service aces en route to a 25-13 set one win.

Set 2
BYU took an early 5-3 lead in set two with kills from Gneiting and Livingston before Whitney Bower carded back-to-back kills, one a dump to the back corner and the other on an overpass, to give the Cougars a 7-3 advantage.

Consecutive kills from Whitney Llarenas and Livingston, followed by a Grimmer and Llarenas block stretched the lead to 10-4, forcing the first Santa Clara timeout of the set.

BYU took two of the first three points out of the timeout, which included the eighth Cougar ace of the night from Livingston, to take a 12-5 lead. After scoring three more consecutive points, the Broncos used their second timeout of the set with BYU leading 15-7.

After the break, McComber immediately recorded the ninth BYU ace of the night, which set the season high for service aces in a match. Kills from Grimmer, Stowell and Kate Prior added to the 9-2 Cougar run that stretched the lead to 21-9.

An Eden Bower kill, followed by a Llarenas and Eden Bower block gave the Cougars set point, which was put away on a kill by Sophia Callahan to take a 2-0 set lead.

Set 3
The Cougars and Broncos traded points with the set knotted at four before BYU took eight of the next ten points to open up a 12-6 lead before Santa Clara took the first timeout of the set. Llarenas tallied three kills during the run, with Livingston and Grimmer carding two of their own.

Out of the timeout, the Cougars went on an 13-6 run to close the match and earn BYU’s 12th win of the season. The game-sealing run included three Livingston kills, two from Gneiting, one from Whitney Bower, Stowell and Callahan, as well as a Gneiting and Callahan roof to seal the win.

The Cougars will next host San Francisco on Saturday, Oct. 8 at 1 p.m. MDT. The game will be broadcast on BYUtv and streamed on the BYUtv app.

Moving up another spot in this week’s American Volleyball Coaches Association (AVCA) poll following the pair of wins, the Cougars (11-3, 4-0 WCC) have been ranked in the top-17 for 133-straight polls.

Earning a pair of wins at Portland and Gonzaga last weekend, BYU was led by outside hitter Elyse Stowell, who set a career-high in kills in both matches, recording 10 against the Pilots and 14 when the Cougars took on the Zags. Named WCC Defensive Player of the Week, middle blocker Heather Gneiting tallied seven blocks in each match, also carding 19 kills and two service aces.

BYU has won 31-consecutive WCC matches, the third-longest streak in NCAA DI women's volleyball. Dating back to 2019, the Cougars have won 23-straight conference games at home. Under head coach Heather Olmstead, BYU is 114-9 in WCC play, with a 13-1 record against Santa Clara, including 8-0 in the Smith Fieldhouse.

Thursday's matchup against the Broncos will also be a Pink Out game in support of Breast Cancer Awareness Month.

The Cougars have swept the last four matchups with Santa Clara, including both games last season and during the spring 2020-21 season. Outside of a four-set loss in 2015, BYU has surrendered just three sets to Santa Clara with Olmstead at the helm.

BYU upped its season hitting percentage to .285 last weekend, moving the Cougars up to No. 15 nationally. BYU also ranks No. 19 in assists per set, averaging 12.81, and No. 21 in kills per set at 13.81. All three statistical marks continue to sit atop the WCC.

Outside hitter Erin Livingston (192 kills), middle blocker Heather Gneiting (124 kills) and middle blocker Whitney Llarenas (112) pace the Cougars offensively. Llarenas' .384 hitting percentage is good for No. 34 nationally and is also a conference leader. Livingston's 3.96 kills per set and 10.25 attacks per set ranks second in the WCC.

Setter Whitney Bower approaches the 500-assist mark on the season this week, totaling 494 on the year. Her 10.27 assist per set average is No. 2 in conference and No. 44 in the nation.

Following the Thursday night matchup, the Cougars will host San Francisco on Saturday, Oct. 8 at 1 p.m. MDT. The game will be broadcast on BYUtv and streamed on the BYUtv app.