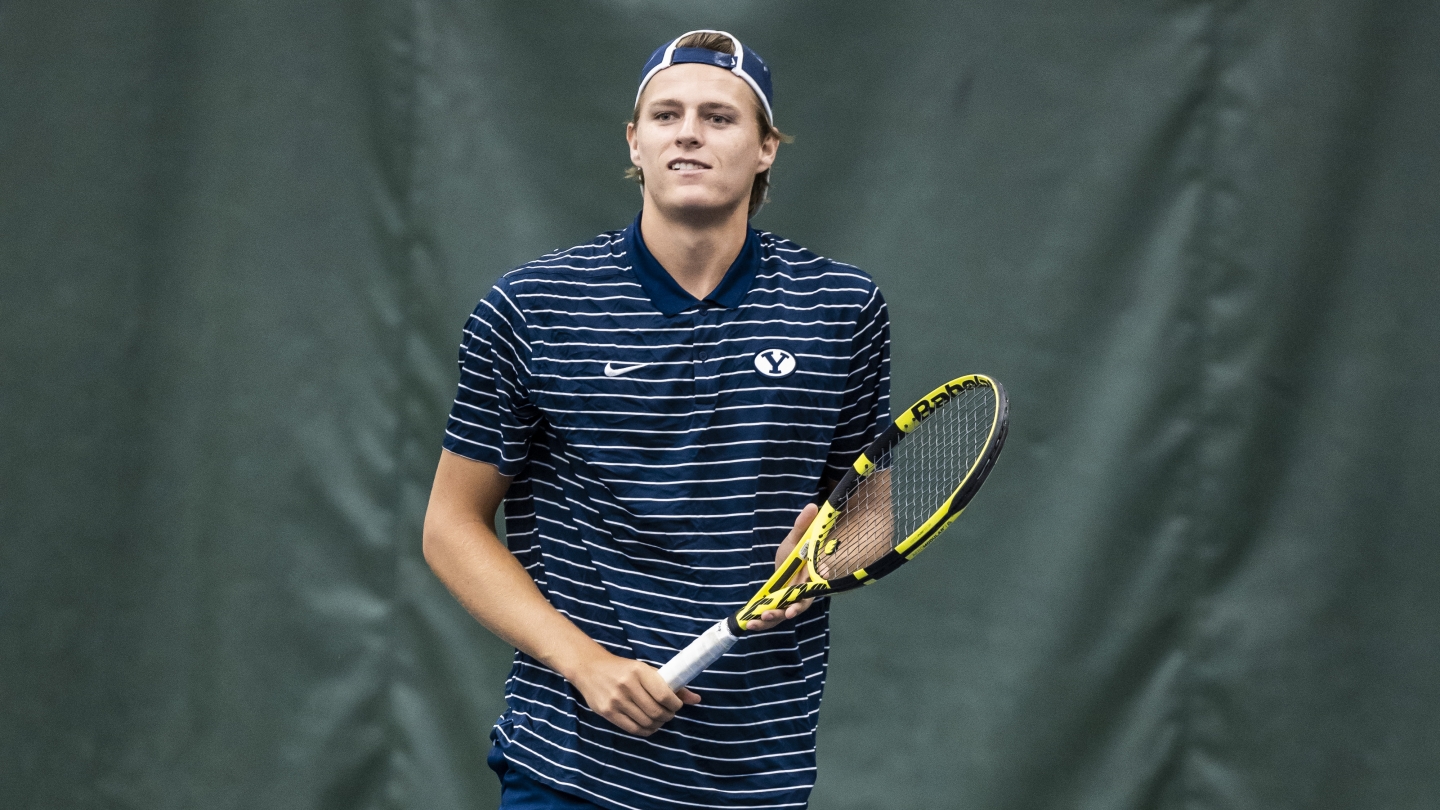 Tulsa, Okla. – BYU’s Jack Barnett and Wally Thayne were eliminated from the qualifying rounds of the ITA Men’s All-American Champions Monday after three close matches. The duo each had a singles match on Saturday before competing in doubles together on Monday.

“Jack and Wally played a solid doubles match, coming up big in the first set tiebreaker. Following a one break second set we fell short in the doubles match tiebreaker. We all learned lessons and are ready for the UCSB tournament later this week,” head coach Dave Porter said.

The fall collegiate national championship was invite only, with entries determined by a player’s preseason rankings and UTR.

Trailing 4-5 in set one, Barnett rallied to force a set tiebreaker, which was eventually won by Van Sambeek. The Lobo then maintained control of the match throughout the second set to secure the victory. The match was Barnett’s first singles appearance in seven months after battling an injury last season.

Despite ultimately dropping the match, Thayne forced Fanlo through multiple tiebreakers in each set. In the second, Thayne got past three match points while down 6-5 to force a set tiebreaker. He then trailed six points to one in the first to seven tiebreak before surviving five more match points to extend the match further. From there, Thayne had a few opportunities to win the set before ultimately falling 13-11, staving off three more match points (11 total throughout the set) along the way.

The Cougars picked up the first set in a doubles match that was just as tight as Barnett and Thayne’s singles matches. After Beasley and Story won set two, the final set was decided by a 10-point tiebreaker, which was again won by the South Carolina duo. Barnett and Thayne are now 3-2 together all-time.

BYU returns to the court this Friday and Saturday, Oct. 7-8, when the team travels to the UC Santa Barbara Classic. The Gauchos are hosting the competition from their Arnhold Tennis Center. 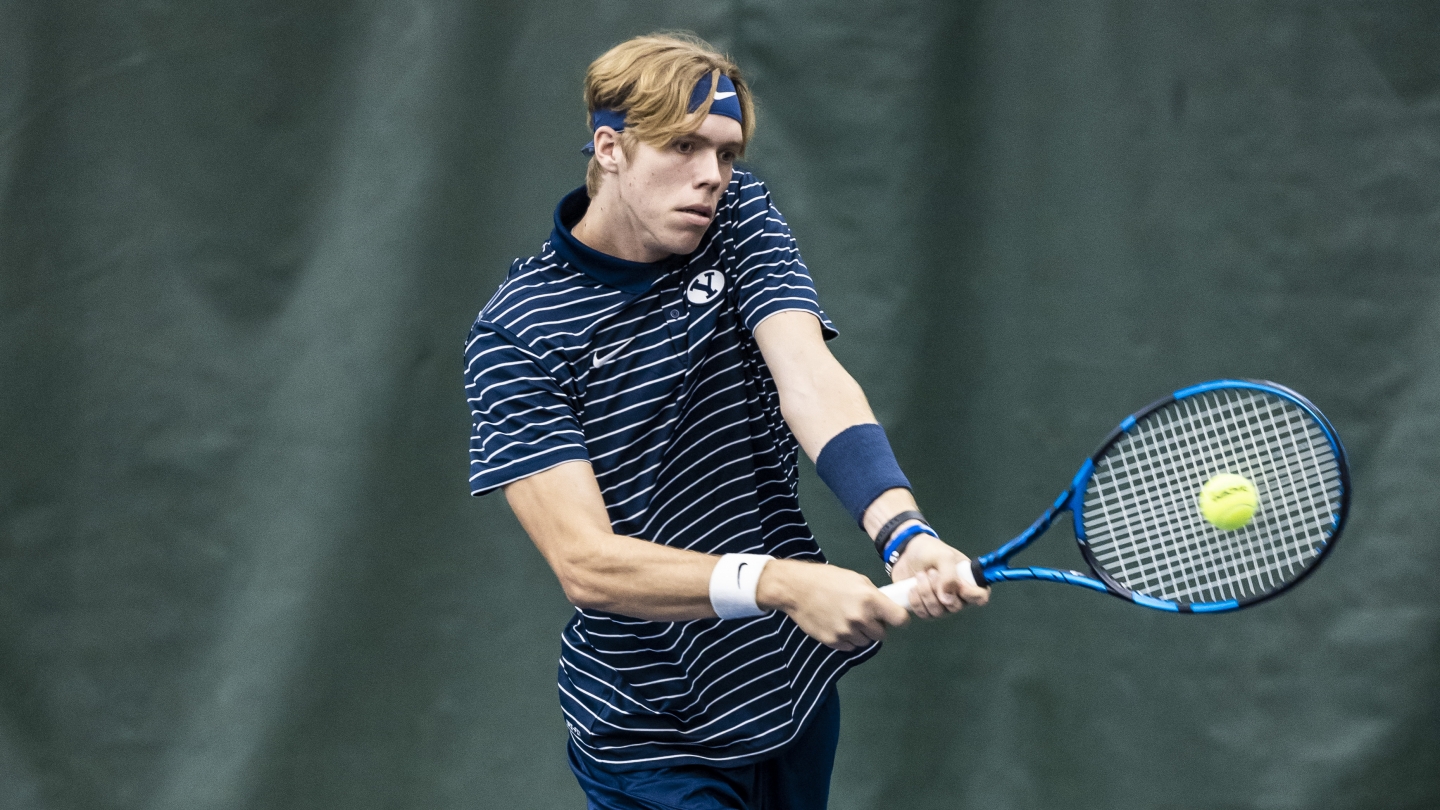 TULSA, Okla. – BYU’s Jack Barnett and Wally Thayne are in Tulsa, Okla. this weekend for the ITA Men’s All-American Championships. The nine-day tournament will crown a fall singles and doubles collegiate national champion.

The tournament runs from Oct. 1-9. Both Cougars will compete in singles, beginning with the prequalifying round, before teaming up for the qualifying doubles round.

Singles play begins Saturday, Oct. 1, while doubles get underway Monday, Oct. 3. The tournament has various levels of qualifying and main draw play. Barnett and Thayne will be competing in single elimination brackets with hopes of earning spots in the singles and doubles main draws, which start on Wednesday, Oct. 5 and will finish with the crowing of national champions.

There will be two sessions each day for both singles and doubles. Consolation matches will be held if the Cougars are eliminated before the main draw.

Both of BYU's matches will be at the Case Tennis Center at LaFortune Park. The team’s social media accounts will share results and further draws after each match. The ITA website will have full-tournament updates.

Barnett and Thayne went 3-1 together in doubles last season. Barnett has a 30-16 career doubles record, while Thayne was 15-12 last season in his first year at BYU.

The junior from Noosa, Australia is in his fourth year at BYU, where he has a 25-19 singles record. Saturday will be his first singles match since March 4, 2022, after being sidelined with an injury. Prior to being ruled out for the season, Barnett was the team’s No. 1 singles player in every match he appeared in.

Also a junior, the Newbury Park, Calif. native finished last year at No. 1 singles. His 27 singles starts in 2021-22 was the team’s highest. Thayne was named a 2022 All-WCC Singles Honorable Mention.

Over 400 players are competing in singles, with entrants determined by preseason rankings and UTR Ratings. The same metrics were used to select the 88 doubles teams. High-seeded players will enter the tournament at later points.

The All-American Championships is one of four national championship events, with one played each quarter. The tournament is also the largest of the four competitions.

Matches will be played at the Michael D. Case Tennis Center, which is on the campus of the University of Tulsa, the tournament’s host. The nearby Case Tennis Center at LaFortune Park will also feature matches.