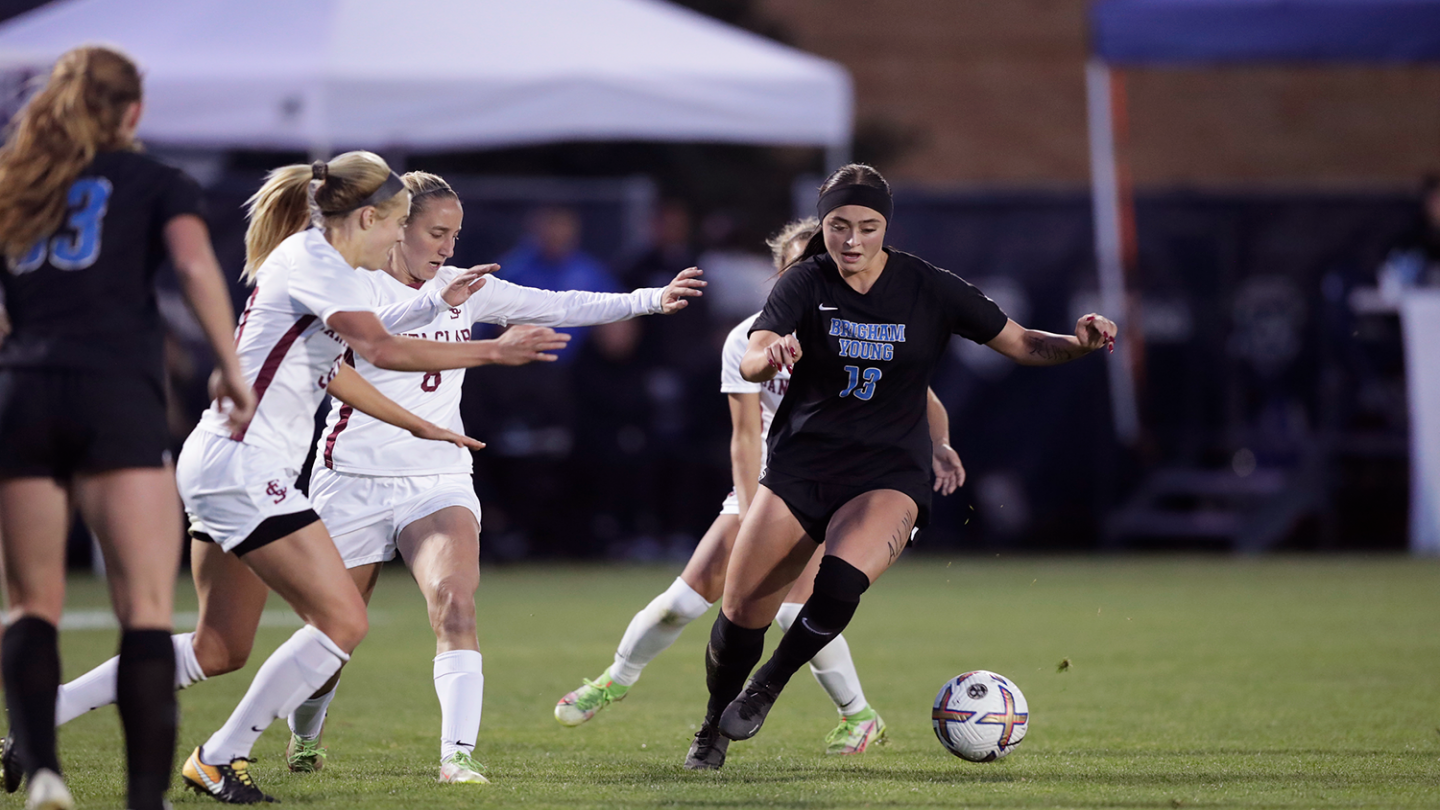 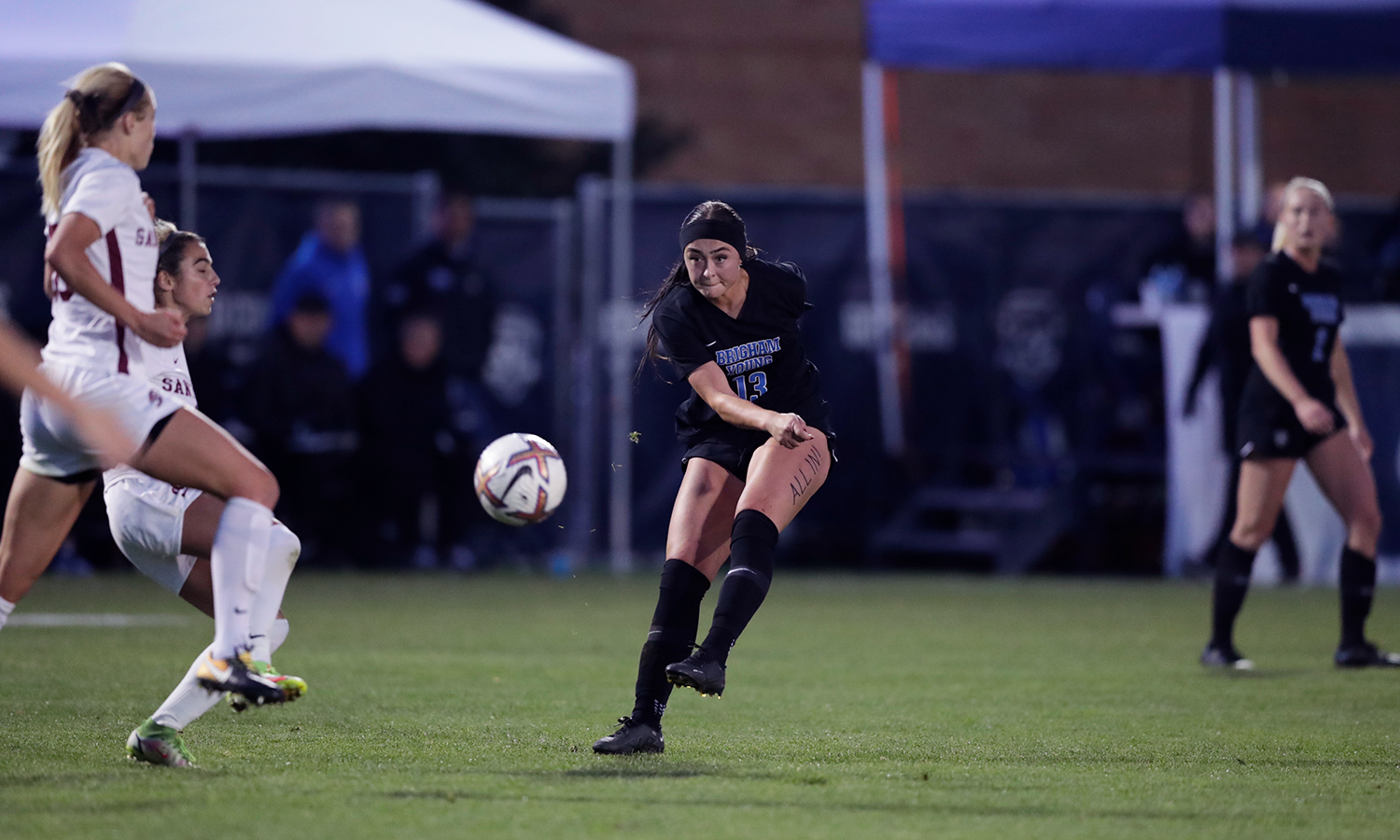 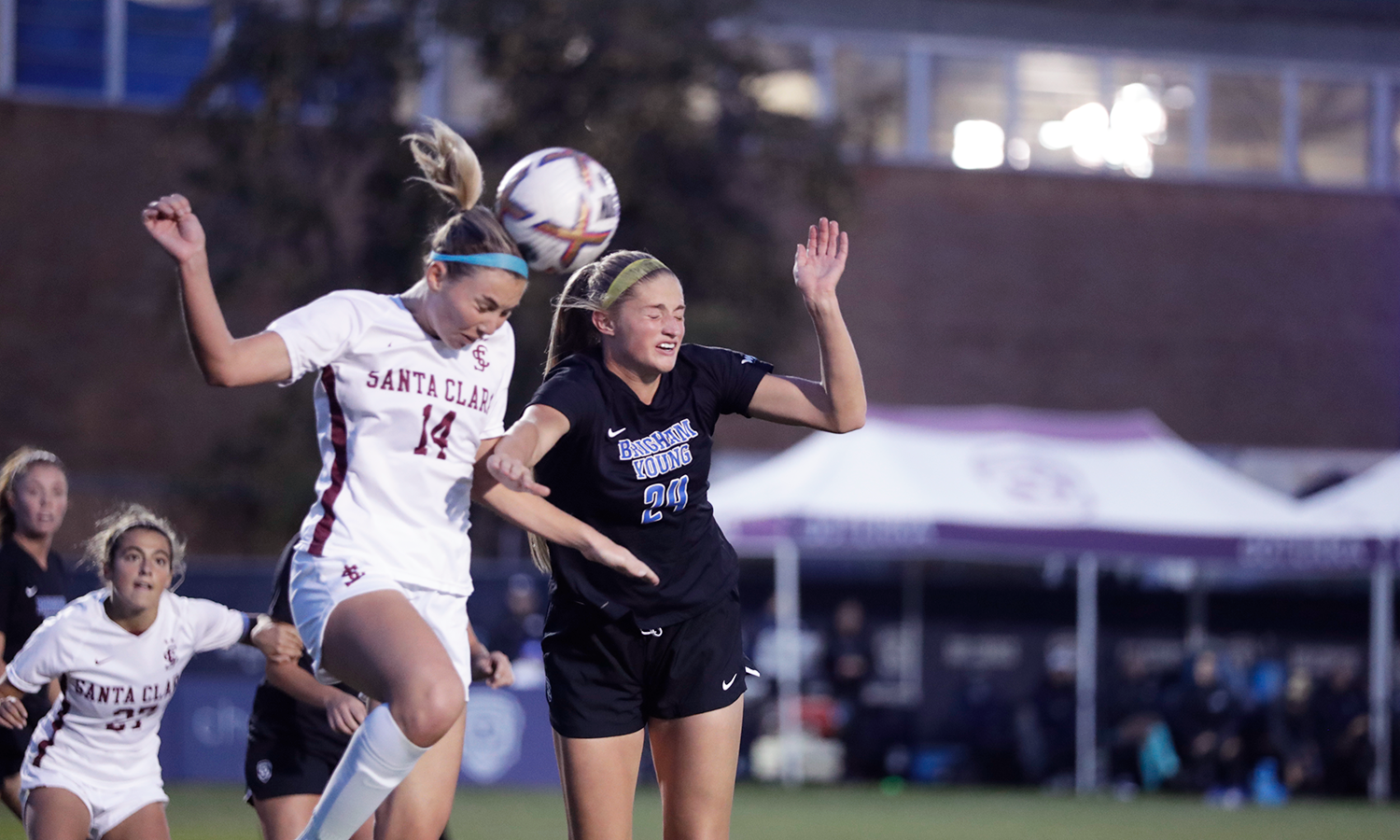 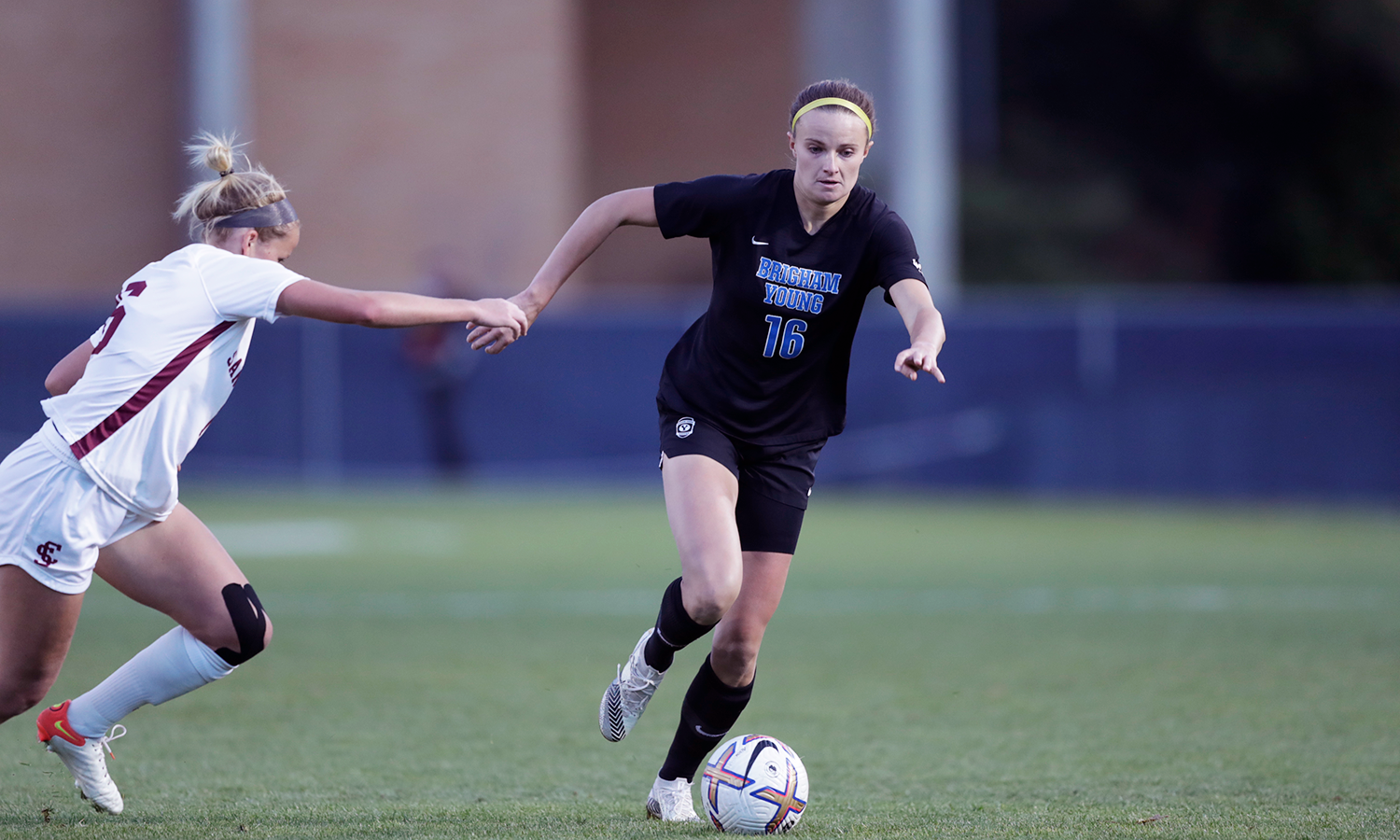 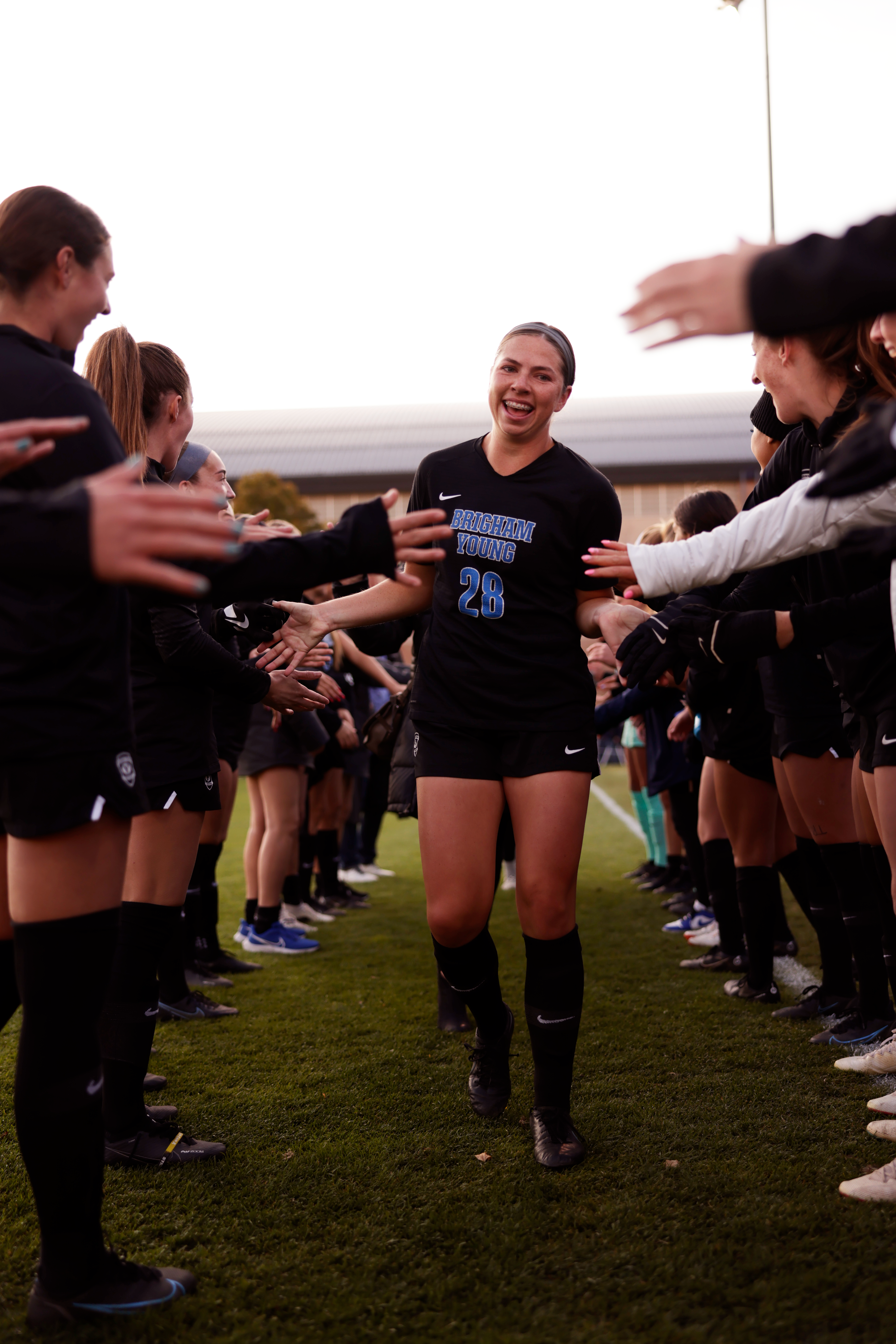 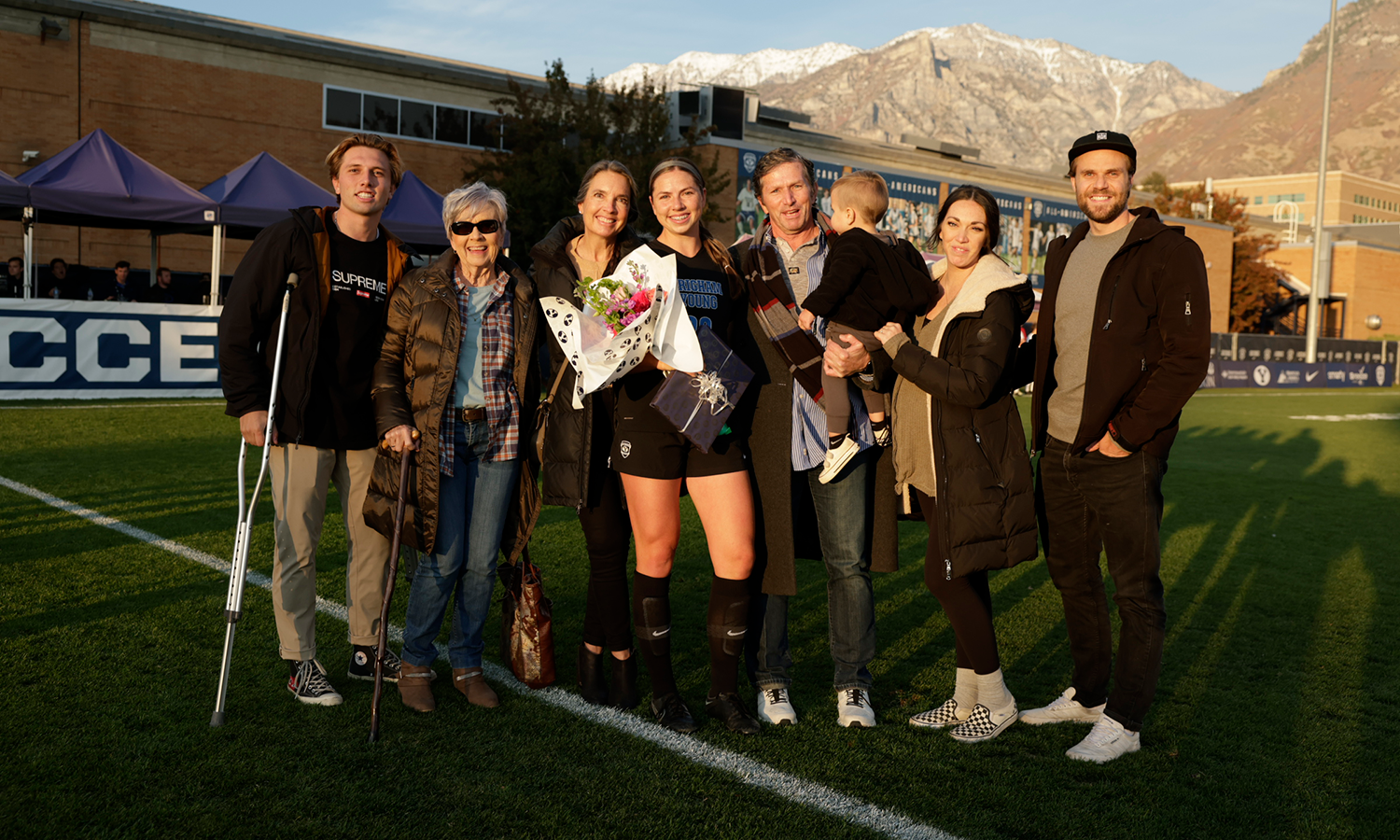 PROVO, Utah — No. 13 BYU women’s soccer played to a 0-0 draw with WCC rival No. 23 Santa Clara at South Field on Saturday night.

"I'm really proud of the way we played," said BYU head coach Jennifer Rockwood. "I'm disappointed that we couldn't put one of those shots in, but overall a very good performance for us."

The Cougars outshot the Broncos 24-4 on the game and 12-2 in shots on goal. A combined 19 fouls were called on the two teams. Olivia Wade led BYU with seven shots. Brecken Mozingo posted five shots (four on goal) and Jamie Shepherd added three.

Despite the draw, the Cougars did succeed in denying the Broncos’ Izzy D’Aquila a goal and holding the WCC’s leading scorer to just one shot.

The Cougars and Broncos battled to a scoreless deadlock at the half after a physical opening 45 minutes that saw a combined 13 fouls called. While both teams traded forays into each’s attacking third, BYU went to the locker room with nine shots and three on goal to Santa Clara’s three shots with one on goal.

BYU came closest to a first half score when, in the 19th minute, Rachel McCarthy headed a blocked shot into the bottom left only to have it collected by Bronco goalie Marlee Nicolos. In the 28th minute, Nicolos would again deliver a save for Santa Clara as she tipped out an Olivia Smith shot rocketed from the top of the 18. Shots from Mozingo, Ellie Maughan and Kendell Petersen would also come up short in the first half. BYU’s defense swarmed Santa Clara attackers at every turn in the early going and goalie Savanna Mason came up with a key denial of a Bronco shot in the 36th minute.

Despite a 15-shot BYU bombardment in the second half, the Cougars and Broncos ended the game tied at zeroes. Santa Clara’s Nicolos saved nine of BYU’s 15 shots in the period and held up against four BYU corner kicks.

"Santa Clara is a great team and tonight their goalie was unbelievable," Rockwood said. "We couldn't get it by her."

The Cougars had several opportunities to score in the game’s waning minutes, but shots from Shepherd and Wade fell short. Folino, Petersen, Smith and Mozingo were among those BYU players attempting second half goals. Mason kept a cap on BYU’s goal as well, saving Santa Clara’s one shot on goal of the half.

BYU's last attempt on goal came from Ruby Hladek, whose shot in the final seconds of the game missed just wide left.

BYU closes out the regular season with road games at San Diego and Loyola Marymount. BYU and San Diego play at Torero Stadium on Nov. 2 at 7 p.m. PDT. The Cougars and Lions collide at Sullivan Field in Los Angeles on Nov. 5 at 7 p.m. PDT. Both games can be heard live on BYURadio.org/BYU Radio app/BYU Radio 107.9 FM.

BYU honored senior defender Natalee Wells before the game on Saturday night. Wells hails from Alpine, Utah and is a product of Lone Peak High School. Prior to joining the Cougars, Wells played two seasons at Utah followed by a full-time 18-month mission for The Church of Jesus Christ of Latter-day Saints in Ulaanbaatar, Mongolia. Entering Saturday's game, Wells had played in 31 games for the Cougars, starting 10 and recording three shots for her BYU career.

No. 13 BYU plays last home game of the season against the Broncos 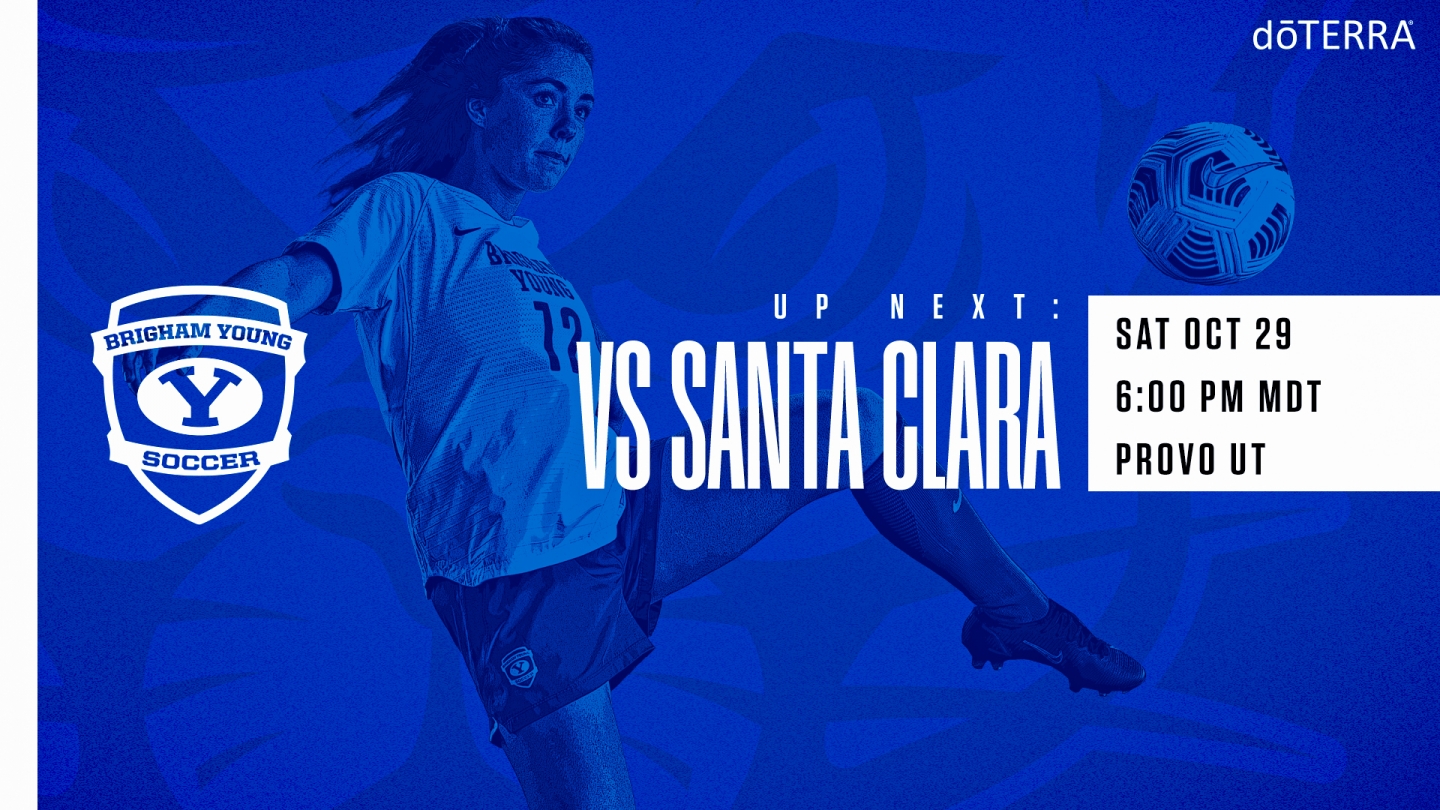 PROVO, Utah — BYU women's soccer prepares to compete in its final home game of the 2022 season against the Santa Clara Broncos on Saturday night.

Saturday’s matchup has been scheduled for 6 p.m. MDT. The game will be carried live on BYURadio.org, the BYU Radio app and BYU Radio 107.9 FM. The game will also be streamed on BYUtv and the BYUtv app.

LAST TIME ON THE FIELD. BYU last competed on South Field on Saturday evening for a rainy showdown with the Gonzaga Bulldogs. Forward Bella Folino grabbed the first goal of the match in the 48th minute with a header off a Brecken Mozingo corner kick. The Bulldogs answered back with an equalizer in the following minute, bringing the game to 1-1. In the 67th minute, defender Daviana Vaka sent a cross that was dummied by Folino, allowing freshman forward Allie Fryer to find the back of the net for the game-winning goal.

COUGARS VS. BRONCOS. The Cougars and the Broncos have played 17 times previously in the regular season, with Santa Clara leading the series 3-9-5. The last time the two teams met was December 3, 2021 in the NCAA College Cup semifinals. The teams ended the game in a 0-0 draw after double overtime, forcing penalty kicks. The Cougars advanced on PK’s, sending them to their first ever College Cup finals appearance in program history.