BYU hands No. 14 Portland its first loss of the season in 4-1 victory 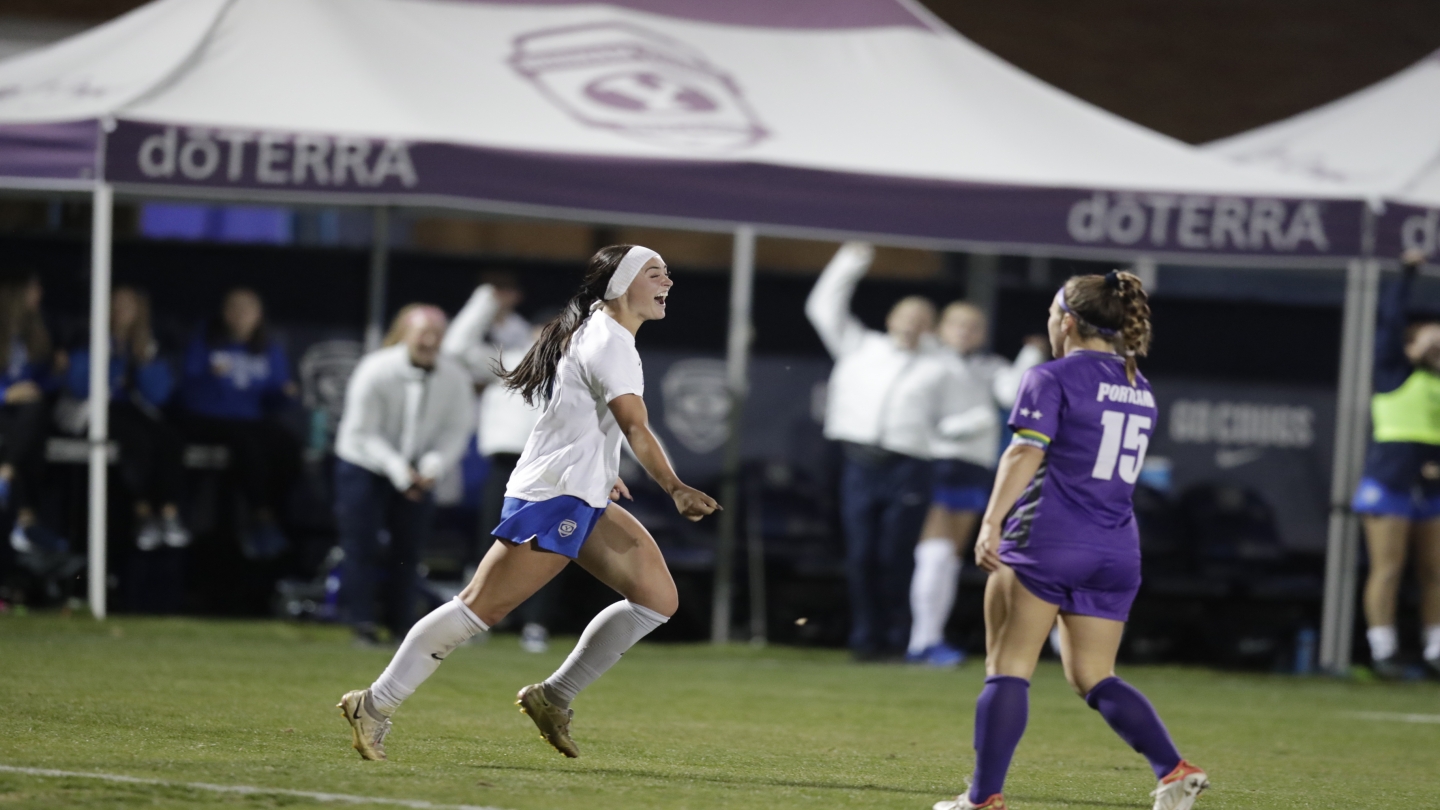 PROVO, Utah - In an action-packed evening on homecoming weekend, the BYU Cougars defeated the No.14 ranked Portland Pilots by a score of 4-1, moving to 6-2-5 on the season and 2-0-2 in conference play.

“We came into this game knowing there was a lot on the line for both teams,” said coach Jennifer Rockwood. “We were up to the challenge. I think the girls can be very confident and competitive going forward.”

Olivia Wade, Jamie Shepherd and Brecken Mozingo all scored for the Cougars, with Mozingo notching a brace on the night, both coming in the second half. Mozingo also posted an assist for a total of five points in tonight's game. This would be the most goals that goalkeeper Bre Norris would allow this season so far for the Pilots.

Mozingo now leads the Cougars in goals (9), assists (8) and points (26). This game is her second multi-goal match of the season.

BYU finished the game with 17 shot attempts, including 7 on target. BYU goalkeeper Savanna Mason had four saves on the night, as the Pilots recorded 14 shots of their own, 5 of which were on frame. The Cougars were also able to take 6 corners to the Pilots 7.

The Cougar offense got rolling early, as Wade ripped the first goal of the night in the 12th minute of play. She received the pass on the right side of the field just outside the eighteen from Mozingo and hit a left-footed shot right into the bottom-left corner of the net.

Portland began pressing on offense, recording the next three shot attempts of the game. The Cougars maintained control though, coming close to their second goal of the game in the 25th minute, as Olivia Smith ripped a shot on the right side of the box off the top of the crossbar. BYU continued to apply pressure on the Pilots defense, with Shepherd scoring in the bottom left corner of the goal in the 32nd minute of the game, carrying momentum into the second half with a 2-0 lead.

The second half began with Portland playing with a sense of urgency, as the Pilots began to apply pressure on the Cougars backline. The aggressiveness failed to pay off in the early minutes, as BYU had two good looks on goal that were saved by the Pilots keeper, by Mozingo and Kendell Petersen.

The Cougars would extend their lead in the 66th minute of the game, as Mozingo received a pass and made a quick move around her defender to break free, hitting the with her left foot and sending it to the back of the net for the third goal of the game.

As the second half continued, the Pilot offense started to come to life, recording three shots in a five-minute span leading up to the 56th minute. In the 69th minute, Portland was awarded a corner kick that ultimately resulted in a goal for Colby Wilson outside the penalty arc. The corner was initially blocked and cleared by the Cougars, but Wilson ripped a volley from the top of the box over Mason’s head, bringing the game to 3-1.

Mozingo went on to close out the game, scoring the fourth and final goal of the night, and her second in the second half. Mozingo received the ball just past mid-field and got by her two defenders to the right side of the box before sending the ball past the hands of Norris.

BYU will look to continue its momentum in conference play, as they get set to face the Pepperdine Waves in Malibu, Wednesday, October 19th at 3 p.m. PDT. The game will be broadcast on BYURadio.org, the BYU Radio App and BYU Radio 107.9 FM. 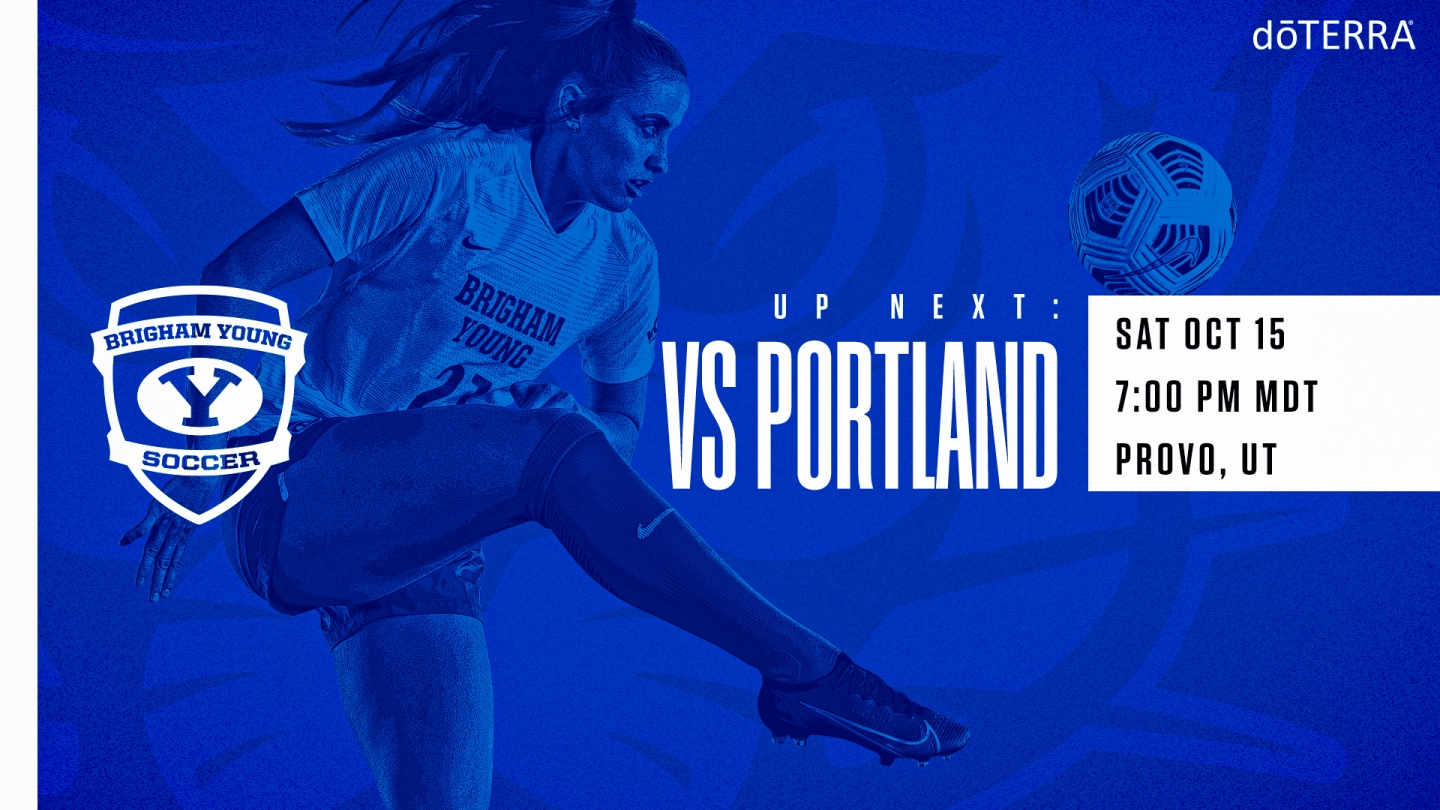 PROVO, Utah — The Cougars return to South Field to compete against No. 14 Portland on Saturday evening to close-out BYU Homecoming Week.

Saturday’s matchup has been scheduled for 7 p.m. MDT. The game will be carried live on BYURadio.org, the BYU Radio app and BYU Radio 107.9 FM. The game will also be streamed on the BYUtv App.

LAST TIME ON THE FIELD. BYU last competed in Stockton, Calif. against the Pacific Tigers and tied 1-1. A goal from Olivia Wade in the 14th minute put the Cougars up early in the match. The equalizer came from the Tigers in the 75th minute with a goal from 28-yards out. Despite a final push by BYU and a curved shot by Brecken Mozingo just hitting the post, the Cougars ended their trip with a 1-1 draw.

COUGARS VS PILOTS. The Cougars and the Pilots have played 16 times previously with BYU leading the series 12-4. The last time the two teams met was Nov. 3, 2021 when the Cougars beat the Pilots 3-0 on Merlo Field. BYU has won the last thirteen games played against Portland. Current BYU forward Bella Folino notched a brace on the night, while forward Rachel McCarthy knocked in the other goal against the Portland Pilots in 2021.