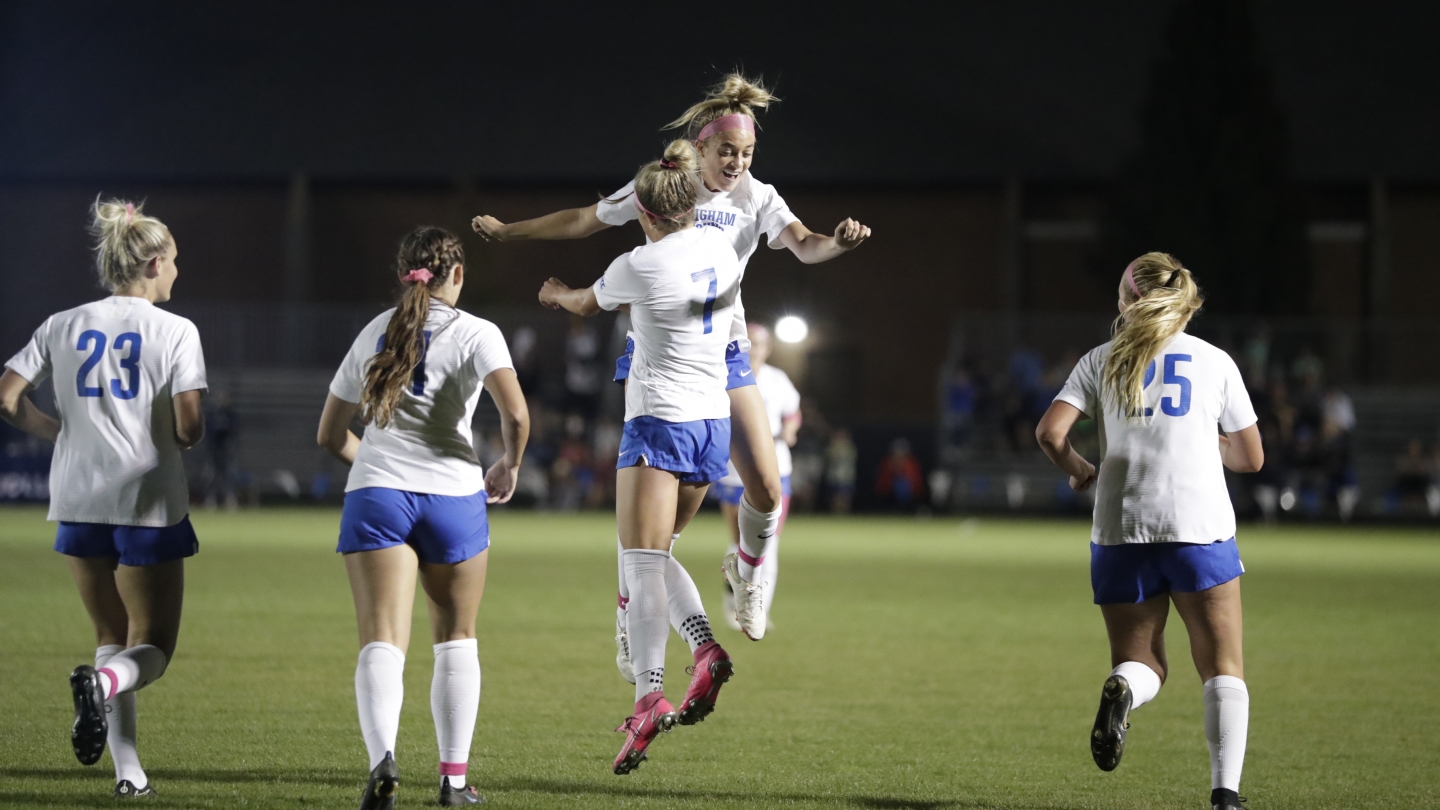 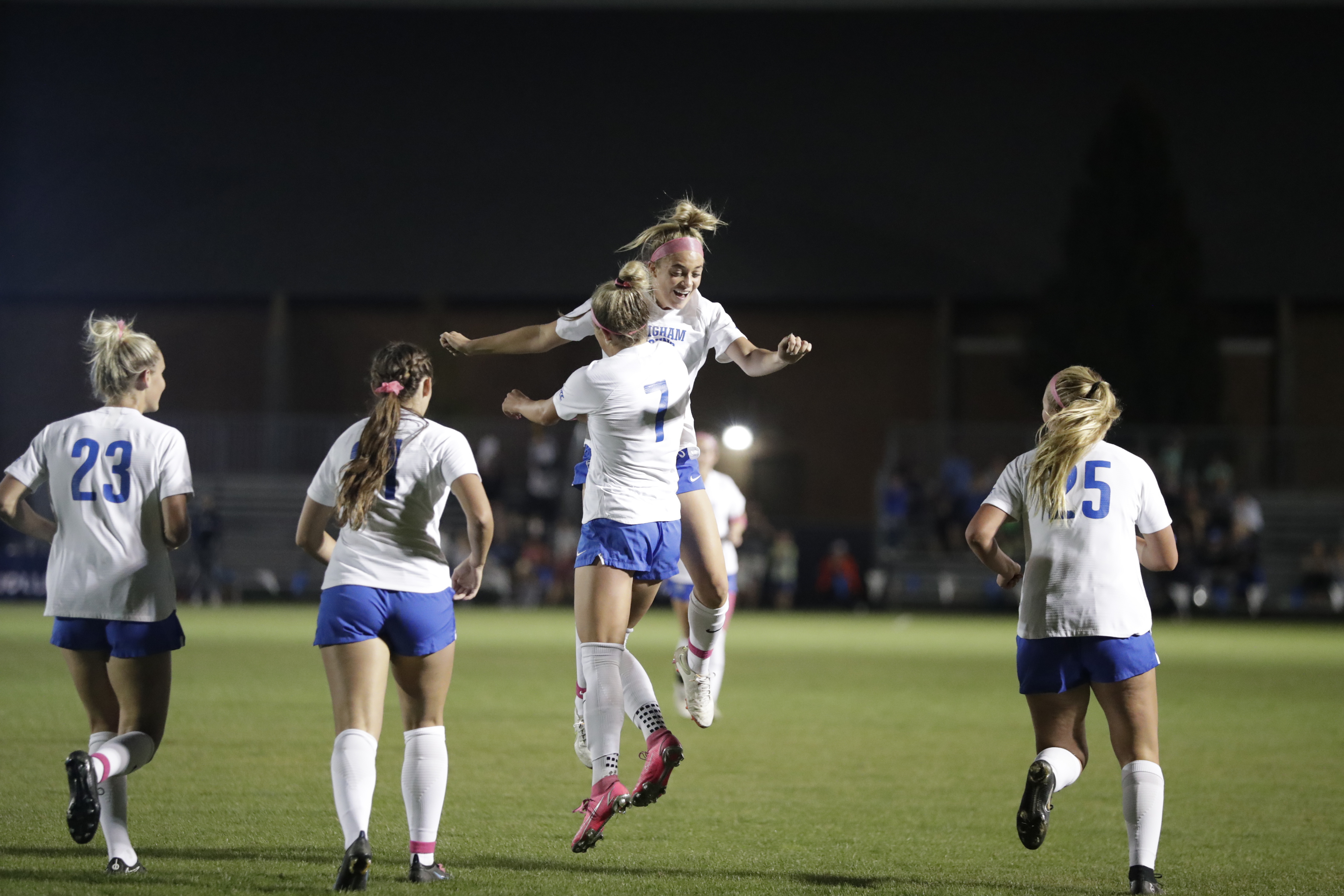 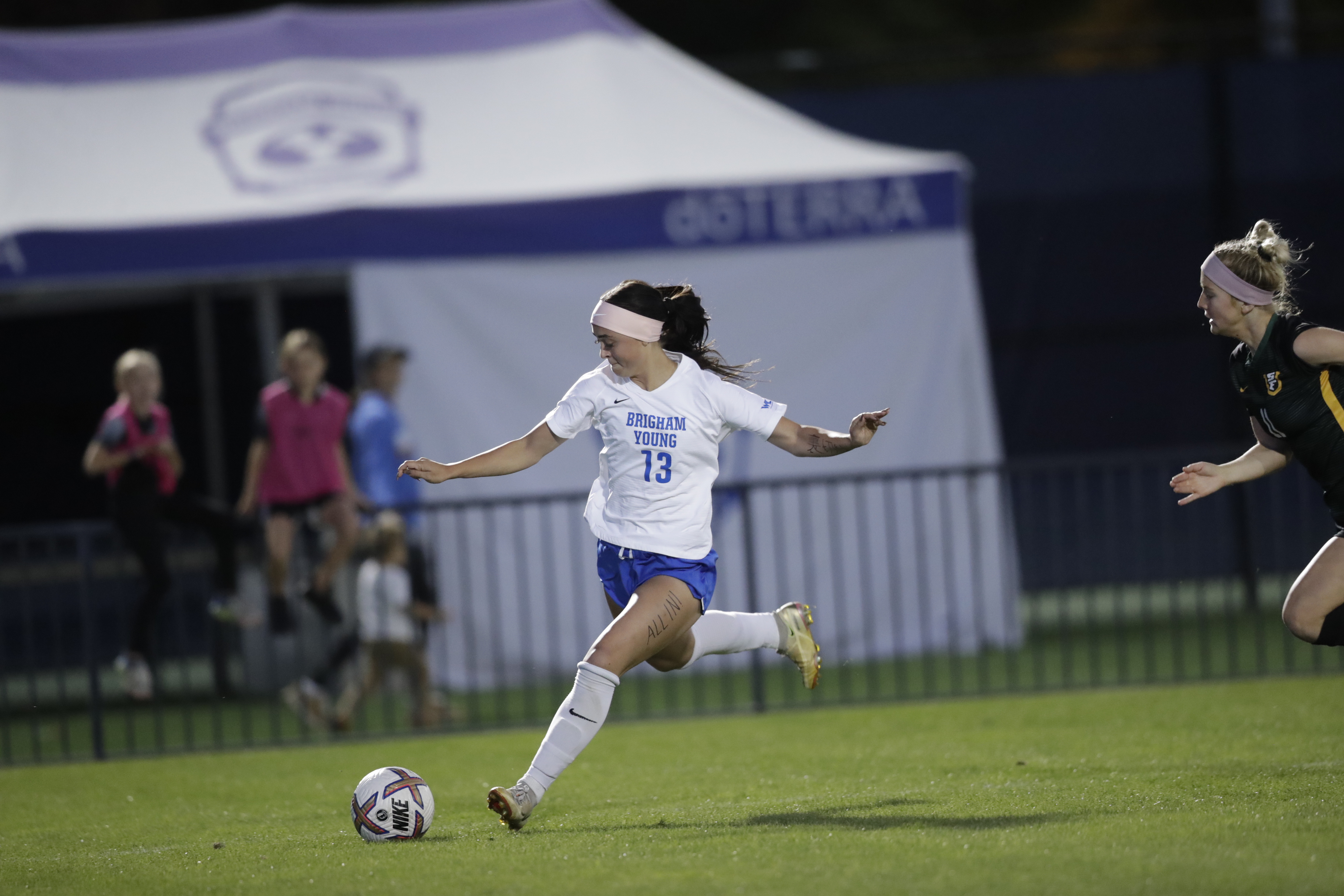 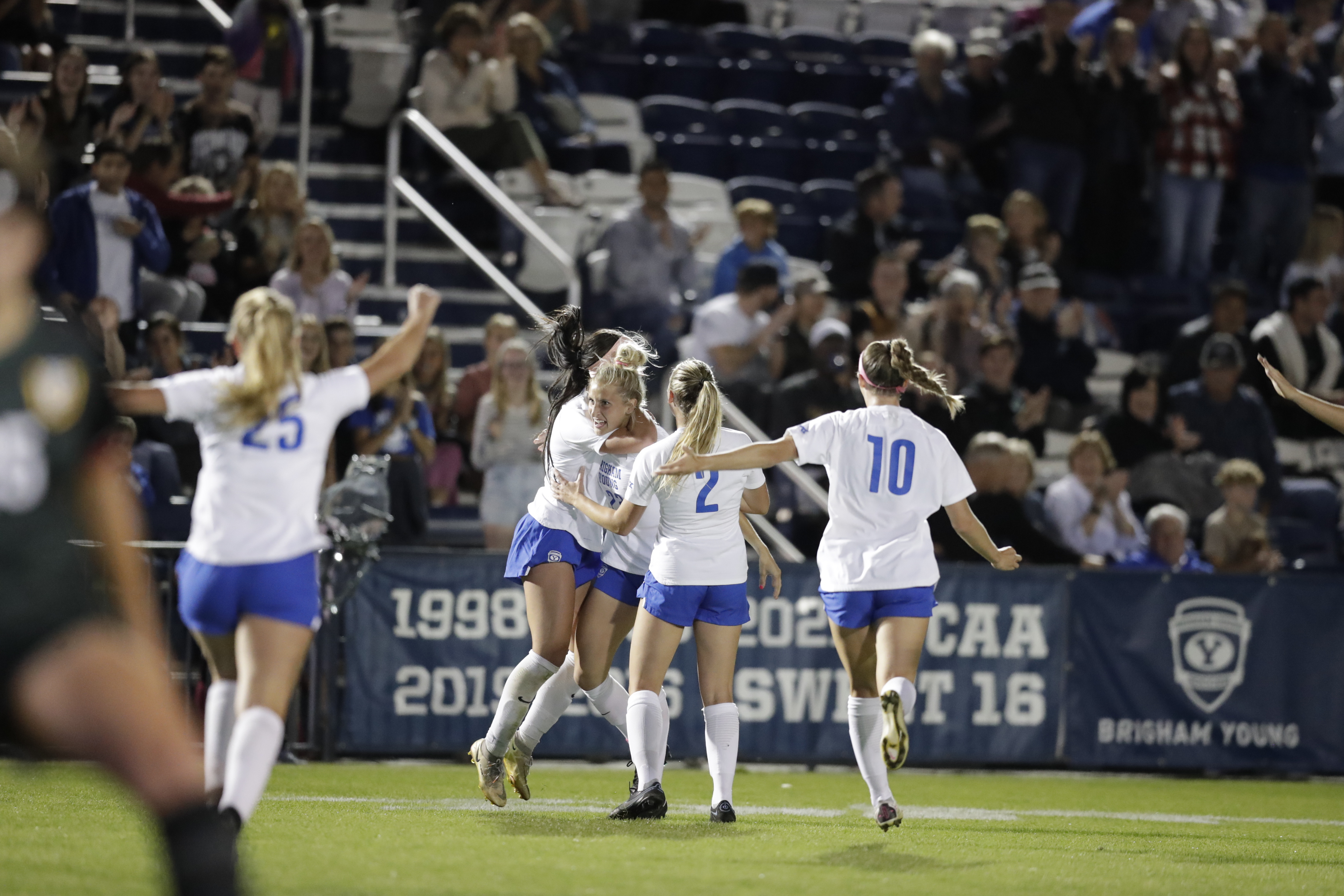 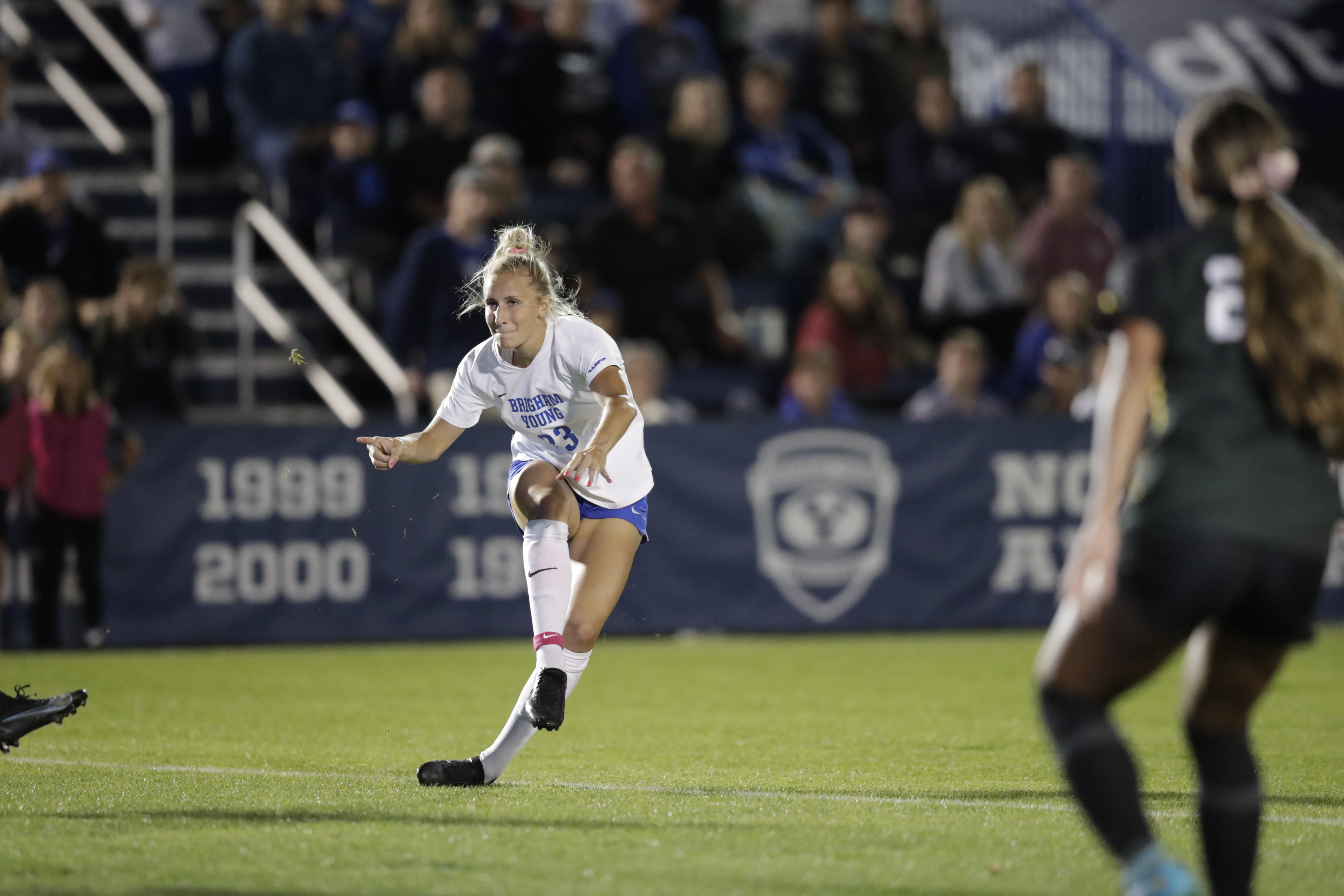 PROVO, Utah - BYU women’s soccer had six goals from six different players Wednesday night in a 6-0 win over San Francisco. The Cougars’ first WCC home match of the season saw the team improve to 1-0-1 in conference and 5-2-4 on the year.

Allie Fryer, Brecken Mozingo, Ellie Maughan, Jamie Shepherd, Olivia Wade and Erin Bailey scored to lead BYU’s offensive onslaught. Freshman Bailey’s goal was the first of her career, and Maughan's was her first of the 2022 season.

“Tonight felt really good," said head coach Jennifer Rockwood. "We obviously came out with a really strong start and I’m really proud of the way the girls tried to take control of the game early. The girls kept after it tonight, and I think everybody felt that the goals would come.”

The Cougars finished with 35 shots, including fifteen on goal. San Francisco goalkeeper Kira Ybarra was forced into nine saves, with her side registering seven shots, two on goal. BYU had 13 corner kicks, while the Dons had one.

The Cougars had most of the first half possession, with San Francisco sitting deep with a compact defense. BYU used the possession advantage to string together 17 shots in the first 45, including nine on goal from five different players.

The game remained scoreless for the first 30 minutes despite BYU’s 10 shots to that point. The biggest offensive flurry was from the 13th-17th minutes when the Cougars registered four shots in the five-minute span.

BYU finally broke through with 15 minutes remaining in the first half for the first goal of the night. Sierra Pennock sent a ball up the right wing where Mozingo shielded a defender to maintain possession. Her cut-back pass found Fryer at the top of the box, whose right-footed shot went over the head of Ybarra, curling down and over into the top left corner of the net.

Fryer had only been in the game as a substitute for four minutes when she found the back of the net, and her goal opened the floodgates for the Cougars. She almost added a second two minutes later, with Mozingo ultimately making it 2-0 in the 36th minute.

The midfielder picked up the ball at the center line, dribbling uncontested all the way to the top of the 18. Mozingo then cut to her left, beating a defender and sending a shot into the bottom right corner of the goal. This goal was Mozingo’s team-high seventh on the year. Her previous assist was also number seven this season, leading the team as well.

The Cougars kept the pressure on until halftime, including Mozingo forcing another save as time expired. BYU finished the frame with six corner kicks as part of its continual offensive onslaught.

BYU picked up where it left off after the break. The team’s kickoff was controlled up to Bella Folino, whose shot was blocked out for a corner.

Maughan got the first goal of the second half in the 49th minute after Wade intercepted a clearance from the Don keeper. She dribbled outside before finding Maughan, who beat a defender and sent her first goal of the season underneath the center of the crossbar.

San Francisco’s best chance of the game came in the 58th minute when the Dons registered their first shot on frame. Alex Carpio took a through ball past a Cougar defender, but her shot was directly at goalkeeper Savannah Mason.

Seconds later, Wade made the game 5-0 with a goal that was nearly identical to Mozingo’s in the first half. She received the ball at the center stripe, dribbled uncontested until outside the 18 and then beat a defender with a cut inside.

Wade’s strike was also her fourth of the season, moving her and Shepherd into a tie for second-most goals on the team this year. All of BYU’s first five goals were scored from outside the box.

The Cougars did not relent after going up by five, finishing with 18 shots, including six on goal, and seven corners in the second half.

The final goal of the night came in the 82nd minute, with Bailey’s goal coming from Ruby Hladek’s first career assist. The two freshmen combined on the left side with a through ball from Hladek, and Bailey’s left-footed strike quicker than the keeper could get down to it.

2,988 fans were in attendance for BYU’s Pink Out game in honor of Breast Cancer Awareness Month.

BYU will continue conference play this Saturday, Oct. 8, at Pacific. The 7:00 p.m. PDT match will be broadcast on BYU Radio. The stream will be available online, through the app and on 107.9 FM. 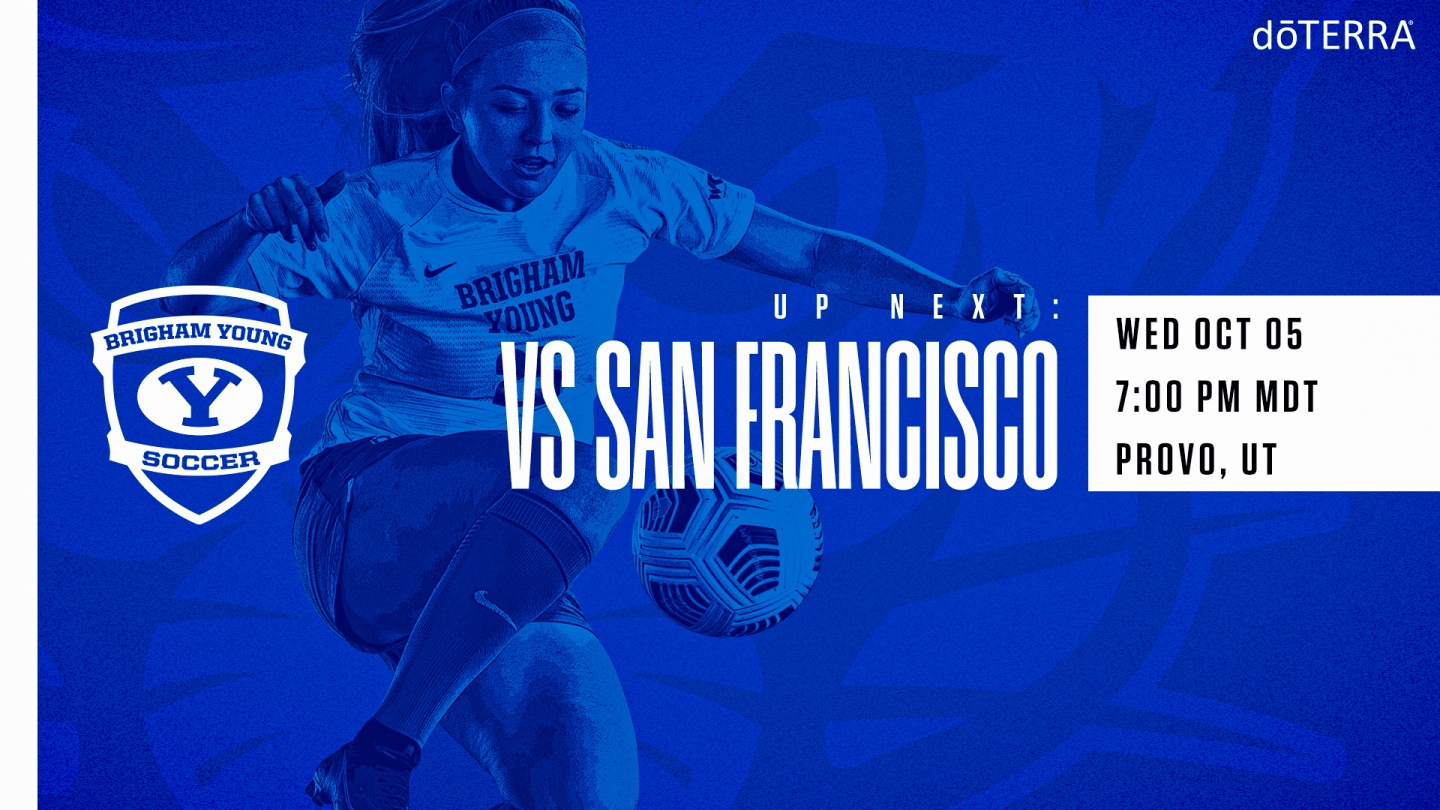 PROVO, Utah — The Cougars prepare to host the San Francisco Dons for their first home conference match on Wednesday evening.

Wednesday’s matchup has been scheduled for 7 p.m. MDT. The game against the Dons will be a Pink Out game in support of Breast Cancer Awareness Month. The game will be carried live on BYURadio.org, the BYU Radio app and BYU Radio 107.9 FM. It will also be streamed on BYUtv and the BYUtv app.

LAST TIME ON THE FIELD. BYU last traveled to Moraga, Calif. to play the Saint Mary’s Gaels on Saturday, Oct. 1. The hard-fought battle ended in a draw despite BYU’s offensive advantage of six corner kicks and 13 shots compared to only six shots by the Gaels. Brecken Mozingo tallied the most shots during the match with four, and Olivia Wade followed close behind with three.

COUGARS VS. DONS. The Cougars and Dons have played 12 times previously with BYU leading the series 10-2-0. The last time the two teams met was Oct. 20, 2021, when the Cougars beat the Gaels 3-1 in San Francisco. A goal in the fourth minute of the match by Bella Folino, followed by goals from former BYU stars Cameron Tucker and Mikayla Colohan edged out the Dons in 2021.