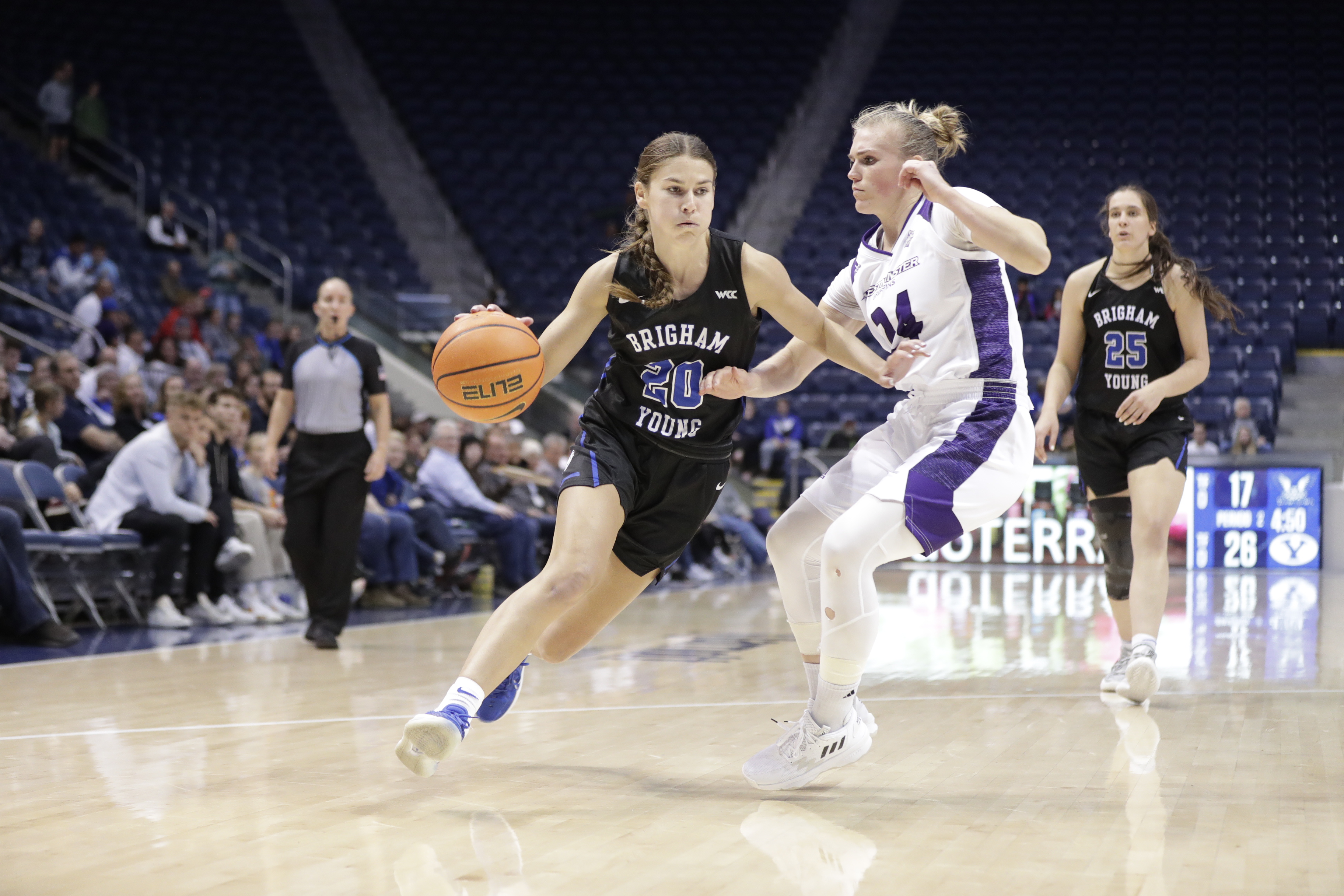 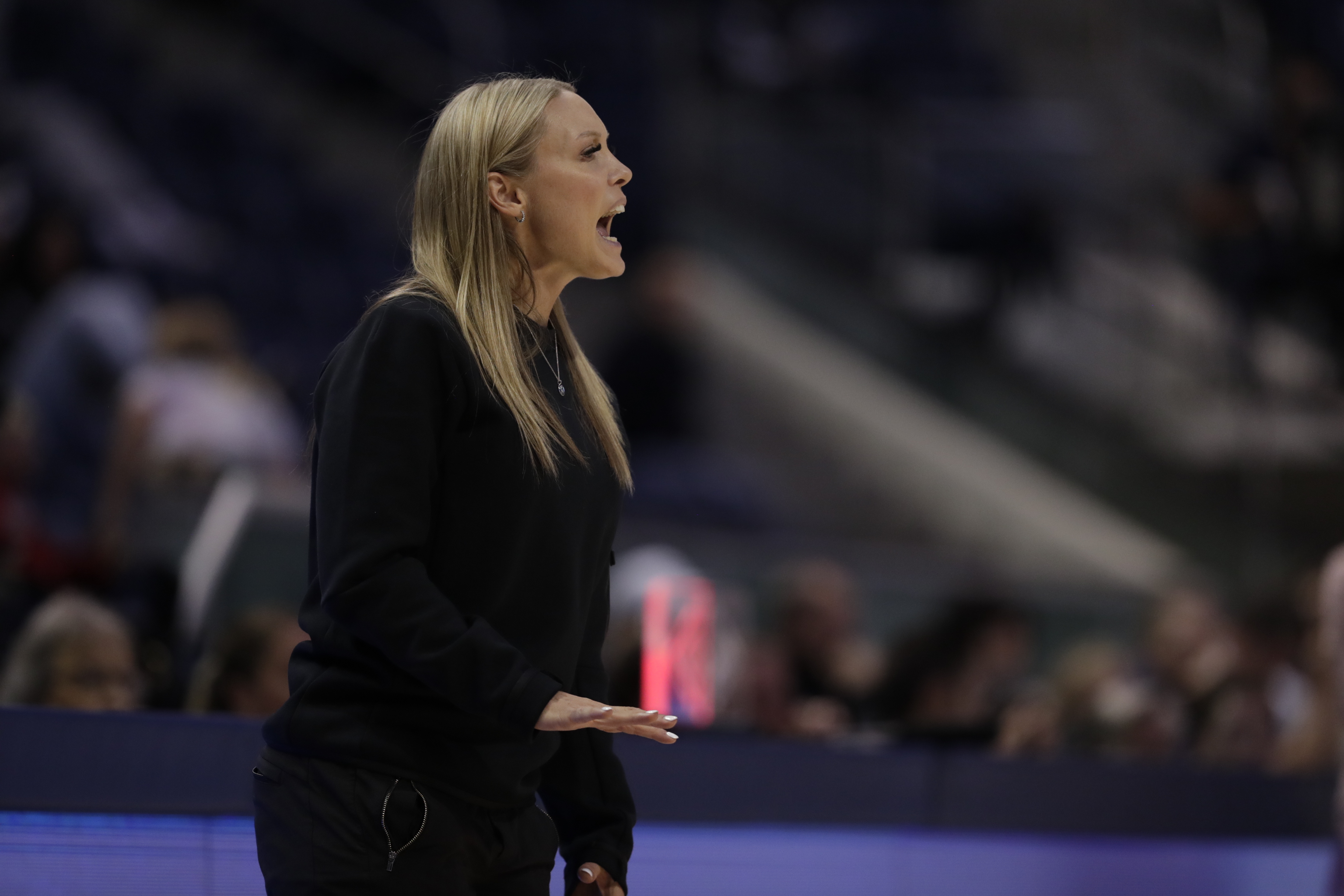 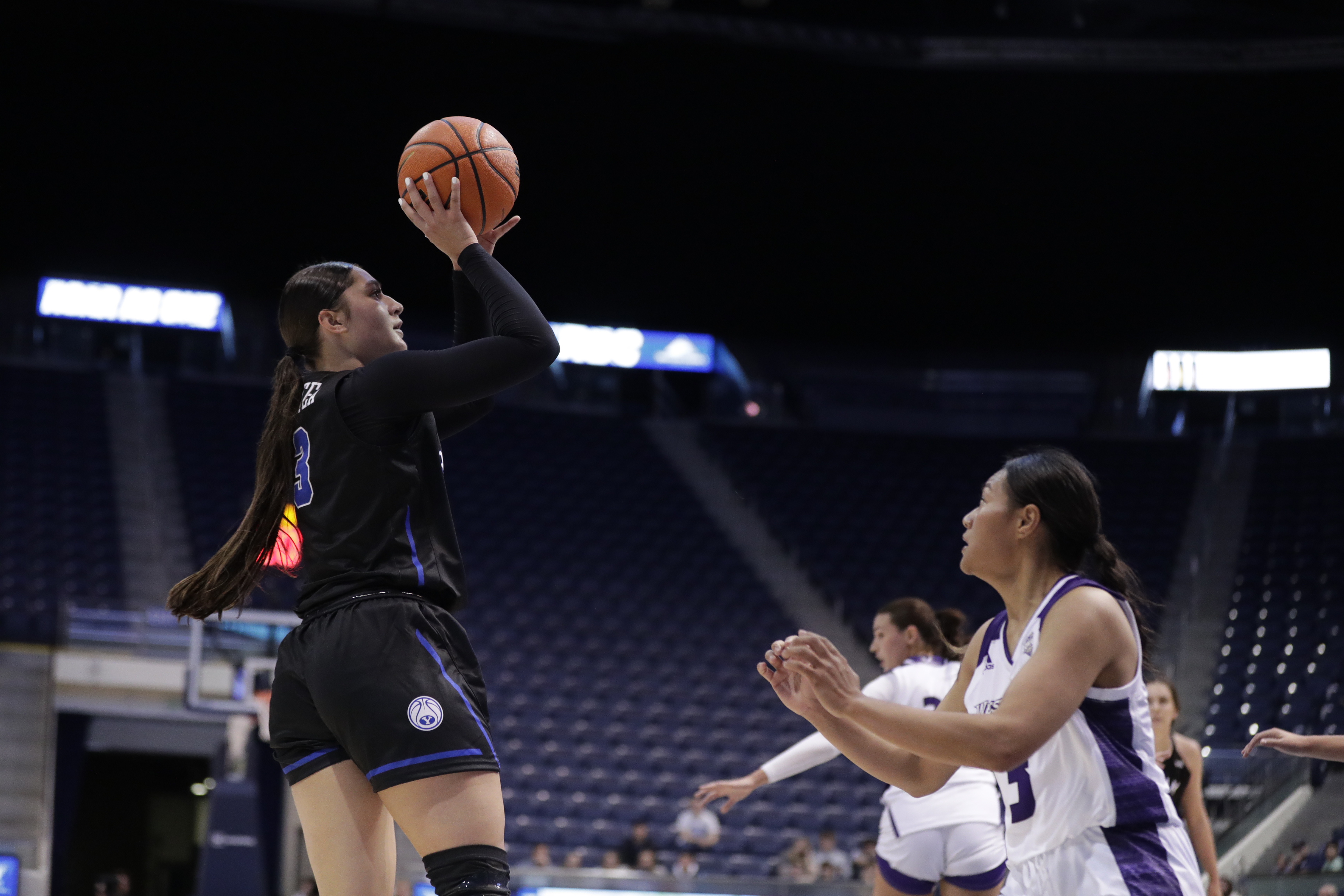 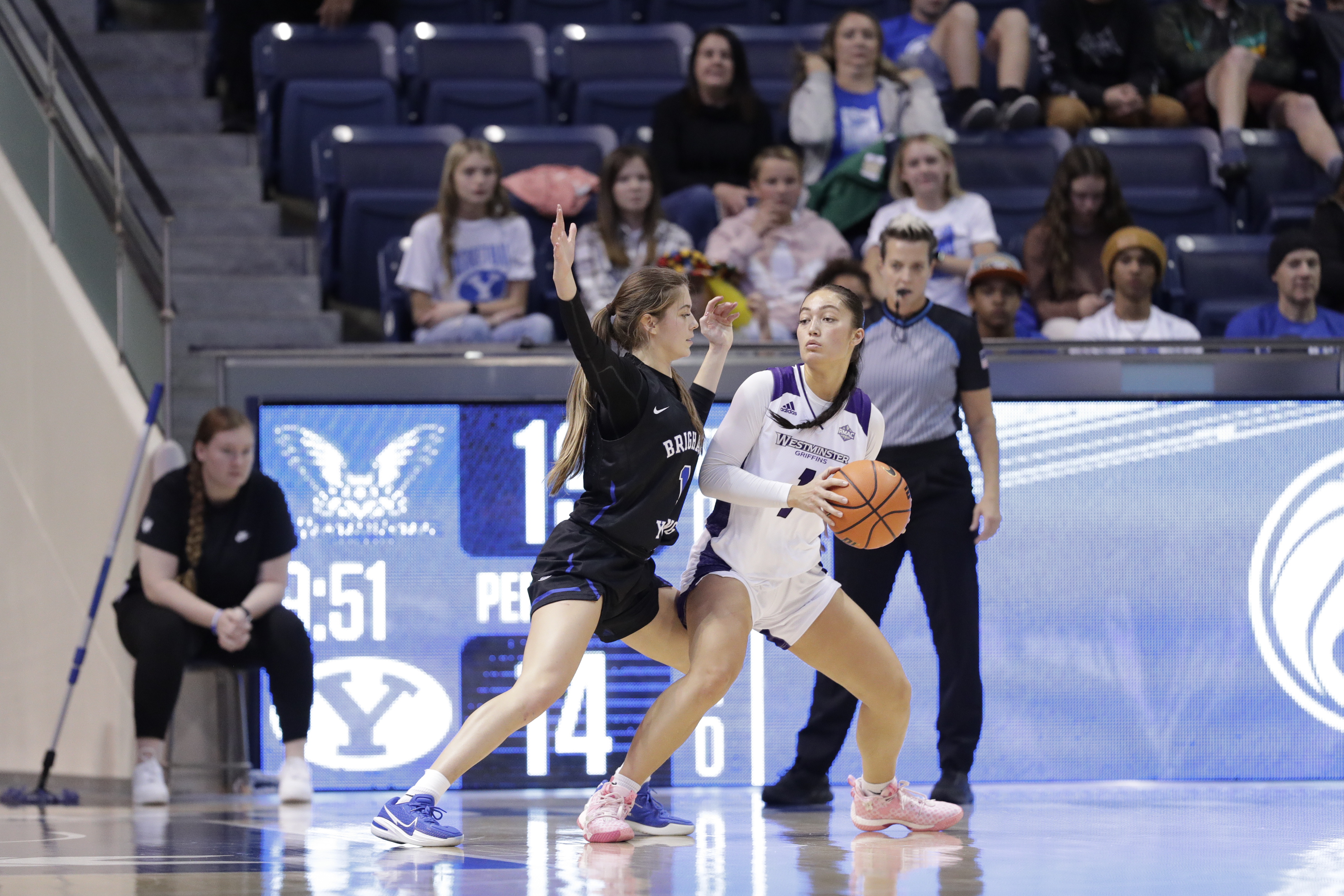 "I feel like it was a really good win," said BYU head coach Amber Whiting. "First games of any season every season are always a little ugly. I was proud of how they fought. That was a huge positive for me."

If played in the regular season, Gustin's 24 rebounds would have tied the Marriott Center record held by Tina Gunn Robison in 1978 against Colorado State and Wyoming.

BYU shot 49.2 percent for the game and held the Griffins to just 30.6 percent from the field. Nani Falatea added 17 points and seven assists while Emma Calvert also chipped in 10 points.

Devry Millett knocked down a three extending the BYU lead to 10-2, but the Griffins responded quickly with a three from Greenwood making it 10-5. The Cougars led after one-quarter 14-13.

Gustin scored the first points of the second quarter, extending BYU's lead to 16-13. The two teams began to exchange buckets but the Cougars still led 20-17 with 6:40 remaining in the half.

Back-to-back layups from Nani Falatea and an added layup from Gustin extended BYU's lead to 26-17, forcing Westminster to call a timeout with 5:40 remaining in the half.

The Cougars continued to extend their lead in the second quarter, going on a 16-0 run before a timeout was called with just over 1:30 to play in the half. BYU led 34-17.

A jumper by Elizabeth Means ended a scoring drought of over six minutes for the Griffins, but they still trailed 34-19. The Cougars led at the half 35-22.

Second half
The difference in the first half was the shooting percentages between the two teams as BYU shot 47 percent and Westminster shot 26 percent from the floor.

The first points of the third quarter were scored by Emma Calvert, giving the Cougars a 37-22 lead. BYU began the quarter on an 8-2 run, forcing the Griffins to call a timeout with just over 7:30 to play in the third and BYU up 43-24.

Amanda Barcello got on the board in the third quarter, knocking down back-to-back corner threes and extending the BYU lead to 51-26.

A three-pointer from Margarita Satini ended an 8-0 Cougar run. After three, the Cougars led the Griffins 57-37.

After four points from each team in the fourth, a timeout was called as BYU led 61-41 with 6:30 remaining in the game.

The Cougars continued to apply pressure and eventually defeated Westminster 72-51.

BYU opens its regular season on the road Nov. 8 against Colorado State. 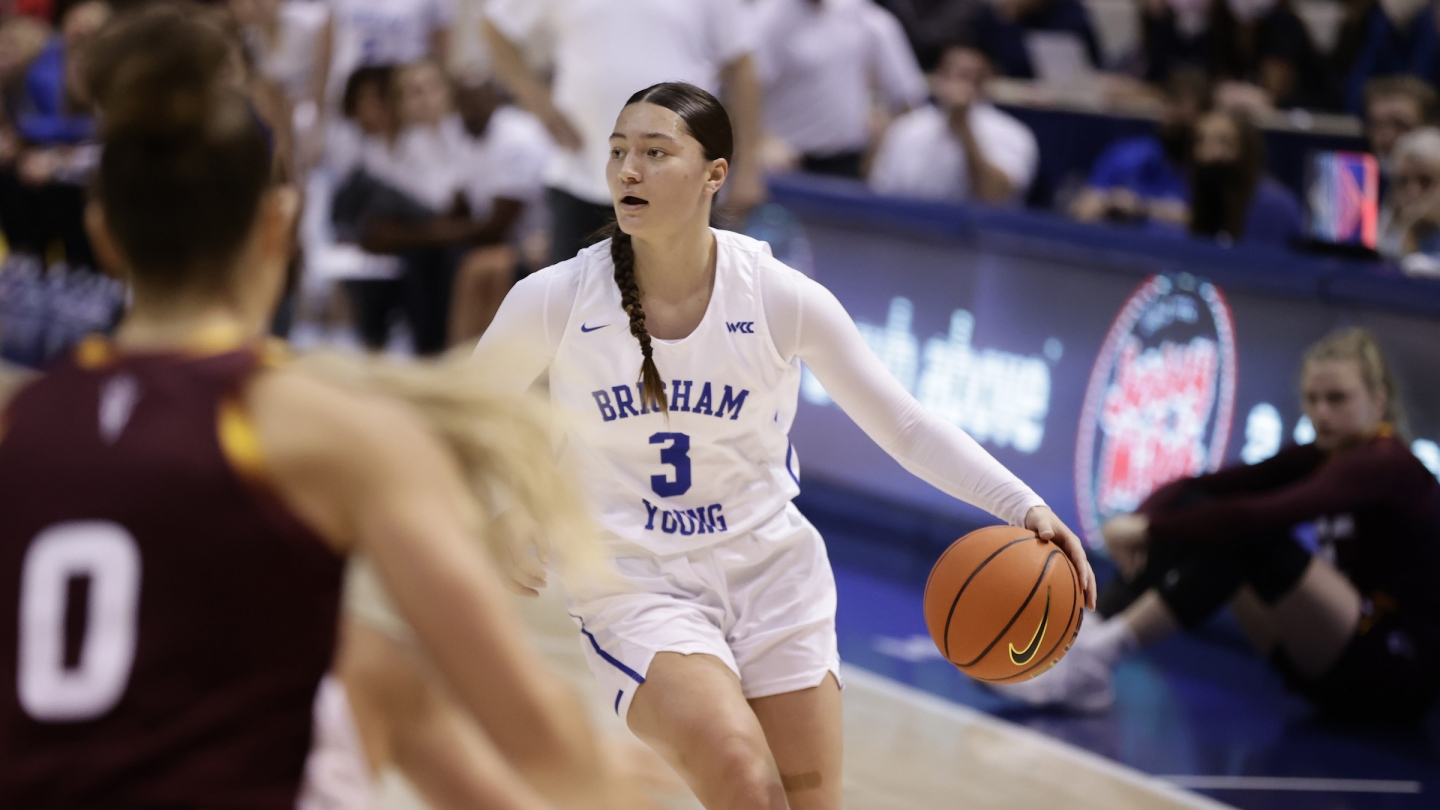 PROVO, Utah – BYU women's basketball will prepare for the 2022-23 regular season with an exhibition game against Westminster at the Marriott Center on Thursday, Oct. 27 at 7 p.m. The game will be streamed on BYUtv.org and the BYUtv App.

Tickets are not required for the exhibition game and admission is free.

Head coach Amber Whiting takes over for Jeff Judkins following his retirement after 21 seasons at the helm of the program. The BYU alumnus inherits a roster that returns All-West Coast Conference first-team selection Lauren Gustin, one of the nation's best rebounders.

The Cougars added Arizona State transfer, Gabriela Bosquez to the guard line. Bosquez, a 5-foot-7 graduate transfer, played in 44 games for the Sun Devils after playing at Blinn College and St. Edwards.

Former Utah Gatorade Player of the Year Emma Calvert returns after playing in 23 games as a true freshman along with Arielle Mackey-Williams after seeing action in 20 games last year.

BYU opens its regular season on Tuesday, Nov. 8 on the road at Colorado State.